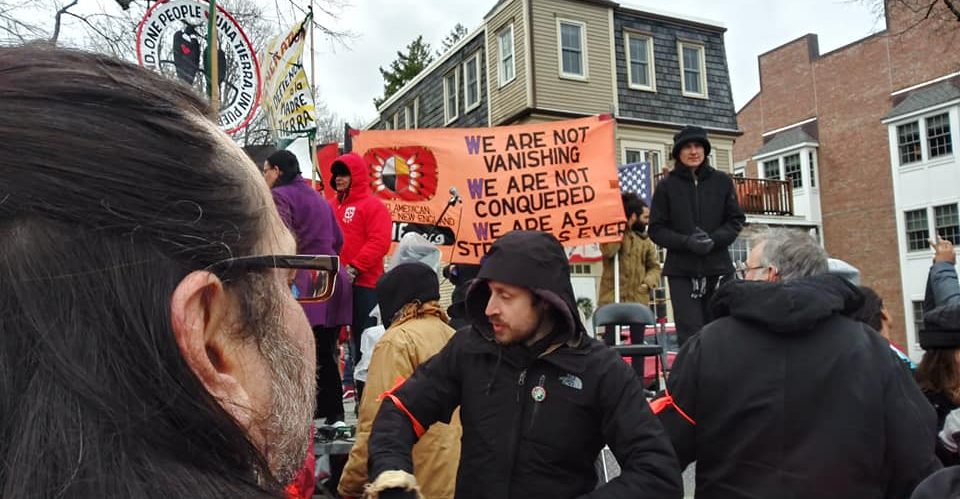 Above photo: From the From Plymouth Rock to Standing Rock to Oak Flat Facebook Page.

Background: An annual tradition since 1970, Day of Mourning is a solemn, spiritual and highly political day. Many of us fast from sundown the day before through the afternoon of that day (and have a social after Day of Mourning so that participants in DOM can break their fasts). We are mourning our ancestors and the genocide of our peoples and the theft of our lands. It is a day when we mourn, but we also feel our strength in political action. Over the years, participants in Day of Mourning have buried Plymouth Rock a number of times, boarded the Mayflower replica, and placed ku klux klan sheets on the statue of William Bradford, etc.

Although we very much welcome our non-Native supporters to stand with us, it is a day when only Indigenous people speak about our history and the struggles that are taking place throughout the Americas. Speakers will be by invitation only. This year’s NDOM is dedicated to Missing & Murdered Indigenous Women, Girls & Two Spirits, and to our thousands of relatives who are migrants and are being abused by ICE and other government agencies, including having their children stolen from them. We didn’t cross the border – The border crossed us! #NoJusticeOnStolenLand

Hundreds of people gathered in the rain and wind in Plymouth on Thursday to observe the 50th National Day of Mourning. The annual tradition began in order to give Native Americans an opportunity to speak on a holiday they say often negates their experiences.

This year, the message was one of continuation: Native Americans are still being lied to, they say, and their lands are still being violated. People from tribes in New York, Louisiana, Canada and Mexico spoke out against pipelines, dams and hydropower stations.

Richards said the pursuit of alternative energies threatens his peoples’ way of life.

“Our children cannot swim in our waters,” he said. “We cannot drink from our waters.”

Mahtowin Munro, of the United American Indians of New England, said those issues cannot be discussed without considering the indigenous perspective.

“Everyone must remember that no one is illegal on stolen land,” Munro said. “And we join migrant communities, saying, ‘We didn’t cross the border, the border crossed us.’”

Munro noted that next year, Plymouth will celebrate 400 years since the Pilgrims landed. She said the city invited Native Americans to be a part of the celebration, which she declined.

“We don’t need a Pilgrim platform,” she said. “We are more than capable of telling our own stories.”

Munro said every year, attendance for the National Day of Mourning has grown.

Thanksgiving: A National Day of Mourning for Indians, 1998

by Moonanum James and Mahtowin MunroEvery year since 1970, United American Indians of New England have organized the National Day of Mourning observance in Plymouth at noon on Thanksgiving Day. Every year, hundreds of Native people and our supporters from all four directions join us. Every year, including this year, Native people from throughout the Americas will speak the truth about our history and about current issues and struggles we are involved in.

Why do hundreds of people stand out in the cold rather than sit home eating turkey and watching football? Do we have something against a harvest festival?

Of course not. But Thanksgiving in this country — and in particular in Plymouth –is much more than a harvest home festival. It is a celebration of the pilgrim mythology.

According to this mythology, the pilgrims arrived, the Native people fed them and welcomed them, the Indians promptly faded into the background, and everyone lived happily ever after.

The truth is a sharp contrast to that mythology.

The pilgrims are glorified and mythologized because the circumstances of the first English-speaking colony in Jamestown were frankly too ugly (for example, they turned to cannibalism to survive) to hold up as an effective national myth. The pilgrims did not find an empty land any more than Columbus “discovered” anything. Every inch of this land is Indian land. The pilgrims (who did not even call themselves pilgrims) did not come here seeking religious freedom; they already had that in Holland. They came here as part of a commercial venture. They introduced sexism, racism, anti-lesbian and gay bigotry, jails, and the class system to these shores. One of the very first things they did when they arrived on Cape Cod — before they even made it to Plymouth — was to rob Wampanoag graves at Corn Hill and steal as much of the Indians’ winter provisions of corn and beans as they were able to carry. They were no better than any other group of Europeans when it came to their treatment of the Indigenous peoples here. And no, they did not even land at that sacred shrine called Plymouth Rock, a monument to racism and oppression which we are proud to say we buried in 1995.

The first official “Day of Thanksgiving” was proclaimed in 1637 by Governor Winthrop. He did so to celebrate the safe return of men from the Massachusetts Bay Colony who had gone to Mystic, Connecticut to participate in the massacre of over 700 Pequot women, children, and men.

About the only true thing in the whole mythology is that these pitiful European strangers would not have survived their first several years in “New England” were it not for the aid of Wampanoag people. What Native people got in return for this help was genocide, theft of our lands, and never-ending repression. We are treated either as quaint relics from the past, or are, to most people, virtually invisible.

When we dare to stand up for our rights, we are considered unreasonable. When we speak the truth about the history of the European invasion, we are often told to “go back where we came from.” Our roots are right here. They do not extend across any ocean.

National Day of Mourning began in 1970 when a Wampanoag man, Wamsutta Frank James, was asked to speak at a state dinner celebrating the 350th anniversary of the pilgrim landing. He refused to speak false words in praise of the white man for bringing civilization to us poor heathens. Native people from throughout the Americas came to Plymouth, where they mourned their forebears who had been sold into slavery, burned alive, massacred, cheated, and mistreated since the arrival of the Pilgrims in 1620.

But the commemoration of National Day of Mourning goes far beyond the circumstances of 1970.

Can we give thanks as we remember Native political prisoner Leonard Peltier, who was framed up by the FBI and has been falsely imprisoned since 1976? Despite mountains of evidence exonerating Peltier and the proven misconduct of federal prosecutors and the FBI, Peltier has been denied a new trial. Bill Clinton apparently does not feel that particular pain and has refused to grant clemency to this innocent man.

To Native people, the case of Peltier is one more ordeal in a litany of wrongdoings committed by the U.S. government against us. While the media in New England present images of the “Pequot miracle” in Connecticut, the vast majority of Native people continue to live in the most abysmal poverty.

Can we give thanks for the fact that, on many reservations, unemployment rates surpass fifty percent? Our life expectancies are much lower, our infant mortality and teen suicide rates much higher, than those of white Americans. Racist stereotypes of Native people, such as those perpetuated by the Cleveland Indians, the Atlanta Braves, and countless local and national sports teams, persist. Every single one of the more than 350 treaties that Native nations signed has been broken by the U.S. government. The bipartisan budget cuts have severely reduced educational opportunities for Native youth and the development of new housing on reservations, and have caused cause deadly cutbacks in health-care and other necessary services.

Are we to give thanks for being treated as unwelcome in our own country?

Or perhaps we are expected to give thanks for the war that is being waged by the Mexican government against Indigenous peoples there, with the military aid of the U.S. in the form of helicopters and other equipment? When the descendants of the Aztec, Maya, and Inca flee to the U.S., the descendants of the wash-ashore pilgrims term them ‘illegal aliens” and hunt them down.

Increasing numbers of people are seeking alternatives to such holidays as Columbus Day and Thanksgiving. They are coming to the conclusion that, if we are ever to achieve some sense of community, we must first face the truth about the history of this country and the toll that history has taken on the lives of millions of Indigenous, Black, Latino, Asian, and poor and working class white people.

The myth of Thanksgiving, served up with dollops of European superiority and manifest destiny, just does not work for many people in this country. As Malcolm X once said about the African-American experience in America, “We did not land on Plymouth Rock. Plymouth Rock landed on us.” Exactly.