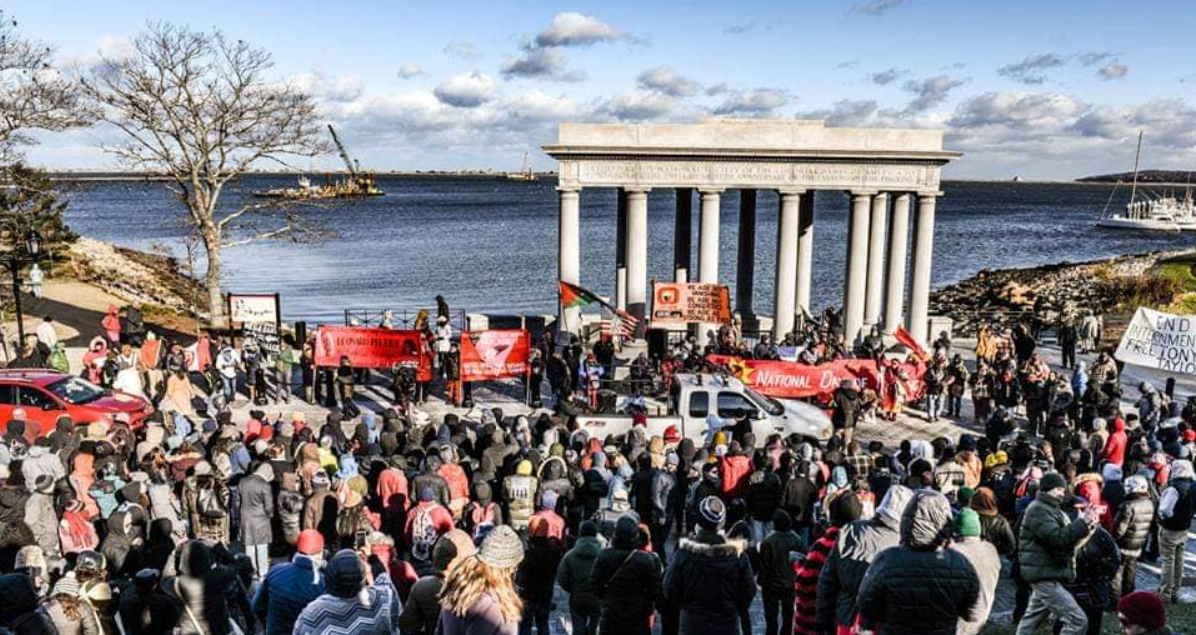 52nd National Day Of Mourning To Be Observed In Plymouth

United American Indians of New England (UAINE) has called for the 52nd National Day of Mourning in Plymouth, Massachusetts on Thursday, November 25, 2021 at 12 o’clock noon. Participants will gather by the statue of Massasoit on Cole’s Hill above the Plymouth waterfront.

Since 1970, hundreds of Native people and non-Native allies have gathered annually in Plymouth on US Thanksgiving Day. This year, in addition to the live event in Plymouth, the event will be livestreamed at the following URL: https://www.youtube.com/watch?v=IrXXA2SaiAs

According to UAINE youth coordinator Kisha James, who is Aquinnah Wampanoag and Oglala Lakota and the granddaughter of Wamsutta Frank James, the founder of National Day of Mourning, “We Native people have no reason to celebrate the arrival of the Pilgrims. We want to educate people so that they understand the stories we all learned in school about the first Thanksgiving are nothing but lies. Wampanoag and other Indigenous people have certainly not lived happily ever after since the arrival of the Pilgrims. To us, Thanksgiving is a Day of Mourning, because we remember the millions of our ancestors who were murdered by uninvited European colonists such as the Pilgrims. Today, we and many Indigenous people around the country say, ‘No Thanks, No Giving.’”

James explained that much of the day will also be devoted to speaking about contemporary issues. “More than 400 years after the arrival of the Mayflower, Indigenous people are still denied the respect and lands that are theirs by right. Change is long past due. We are still facing many of the issues that our elders talked about back in 1970 at the first National Day of Mourning. We call on non-Native people to listen to Indigenous voices and wisdom about addressing the climate crisis and other pressing issues.”

UAINE co-leader Mahtowin Munro said, “One historical fact that people should learn is that the first official day of ‘thanksgiving’ was not declared in Massachusetts until 1637, when the Puritan Governor Winthrop declared a day of thanksgiving to celebrate the men from Massachusetts (including Plymouth) who had safely returned after massacring over 700 Pequot men, women and children on the banks of the Mystic River in Connecticut.”

Munro also spoke about some of the current issues that affect Indigenous communities. “Participants in National Day of Mourning this year will speak about many things. We will mourn and honor the thousands of Missing & Murdered Indigenous Women Girls & Two-Spirits (#MMIWG2S), and mourn for those affected by COVID-19, which has had a particularly devastating impact on Native communities. We will join the thousands demanding the identification and return of the remains of thousands of Indigenous children from the residential schools and boarding schools that were sponsored by Canada and the US in order to “kill the Indian” in the children and destroy Indigenous communities. From Chile to British Columbia, from Boston to the Amazon, Indigenous peoples are defending their sovereignty and insisting that nothing should happen on their lands without their freely given consent. Indigenous solidarity and resistance are international. We stand in solidarity with the Wet’suwet’en who have been attacked by the RCMP for trying to stop a destructive Coastal Gaslink pipeline, with all those opposing pipelines and mines.”

Munro continued, “Here in Massachusetts, the state legislature needs to pass our bills to ban the use of Native American mascots, protect sacred Native American heritage, include Native curriculum in the public schools, and celebrate Indigenous Peoples Day instead of Columbus Day, and improve educational outcomes for Indigenous students. We call on those elected officials to do the right thing.” (More info on legislation at MAIndigenousAgenda.org)