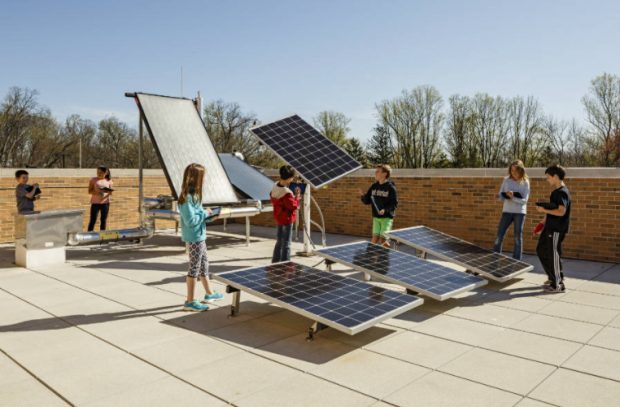 Above Photo: Students learn about some of the technologies used to harness solar energy in a rooftop lab at Discovery Elementary in Arlington, Virginia. The school has a 495-kilowatt solar array. Credit: Lincoln Barbour

As renewable energy prices drop, schools are saving millions, while teaching students about technology. Their solar capacity has nearly doubled in three years.

In a field behind an elementary school in rural Middlesex County, Virginia, near the Chesapeake Bay, an ambitious plan has been taking shape: Schools Superintendent Peter Gretz and other local administrators are preparing to power their school district with solar energy.

By next August, Virginia-based solar developer Sun Tribe Solar expects to have an array of solar panels in place in that field that can generate enough electricity to power the county’s elementary school and middle school—at a price well below their current electricity costs—while offering students, teachers and the community a way to learn about clean energy.

“We felt it was important work for our kids, and we wanted them to see the community leading in a way that was responsible and sustainable, as well as fiscally responsible and efficient,” Gretz said.

The number of schools powered by solar is growing quickly. About 5 percent of all K-12 U.S. schools are now powered by the sun, and their solar capacity has almost doubled in the last three years, according to a new study by the Solar Energy Industries Association (SEIA), The Solar Foundation, and Generation 180, a clean energy nonprofit.

The nearly 5,500 schools using solar power today have a total of 910 megawatts of solar capacity, enough to power 190,000 homes, according to the study.

The biggest reason for the surge is the economic benefits of solar energy. Drastic declines in price have made it financially viable for schools. Both public and private schools are reducing their electricity bills with solar, leaving them more money to spend on educational programs, according to the research. Many are also incorporating renewable energy into their science, technology, engineering and math (STEM) lessons.

Mirroring the overall solar landscape, California has the most school installations, with nearly 2,000 schools that use solar power. Nevada has the highest adoption rate: 23 percent of schools are now using solar energy. New Jersey, Arizona, Massachusetts and New York, other states with solar-friendly policies and a rapidly growing solar base, also have high adoption rates, according to the study.

“People are excited about the environmental benefits, and the curriculum development, but what has moved the needle is the economics,” said Devin Welch, vice president of business development for Sun Tribe. “It has really changed the narrative completely.”

Schools Are Saving Millions of Dollars

Sun Tribe has spent the last two years working to expand solar in Virginia, which gets less than 1 percent of its electricity from solar. The company has installed an array on a private school campus near Charlottesville and on the University of Virginia’s campus. By partnering with the Virginia Association of Independent Schools, Sun Tribe is working to expand a pilot program for third-party power purchase agreements in the state.

“Schools have always been in demand for solar because it aligns so well with their mission: preparing the next generation of leaders,” Welch said.

According to the study, the average school solar system is about 300 kilowatts, which is 900 to 1,200 panels. Most are installed on rooftops, but there are many other models: solar farms are being built near campuses or on shaded carports in parking lots; urban schools with less space are participating in community solar projects; new buildings are being designed to be solar or net-zero-energy ready. The projects can save school districts into the millions of dollars over the projects’ 25-year lifetime. Kern High School District in Bakersfield, California, for example, is estimated to save as much as $80 million in electricity costs over 25 years with its 22-megawatt project.

The upfront costs of the majority of school solar projects are funded through power purchase agreements, which allow a solar company to install panels and sell the power to the school, but some have also been funded through school bonds if the state does not allow third-party solar.

Middlesex County is using a power purchase agreement with Sun Tribe and will pay 6.8 cents a kilowatt-hour for solar, compared to about 9 cents the district currently pays, Gretz said. The district expects to save about $2.5 million in energy costs over 25 years with the solar panels.

The Students Get It

There has been some pushback from communities, although most, even in a conservative state like Virginia, have been on board as prices have dropped to make solar more affordable for schools. But the students get it, Welch said. In many cases, students have been the ones to push schools to transition to solar power, and some have gotten jobs with solar installers after projects were completed.

To cultivate more of that enthusiasm, solar companies are partnering with local organizations to develop math and science curriculums that teach students and teachers about renewable energy. In North Carolina, the nonprofit NC GreenPower has a program that offers low-income schools in the state a curriculum about solar, along with a 5-kilowatt solar array and weather station that classrooms and often, the community, can use as an educational tool.

“We hope this opens the door, especially in areas where solar is not welcomed,” said Katie Lebrato, marketing communications director for NC GreenPower. “This provides an educational opportunity for folks who live nearby.”

The sector is growing rapidly, but like the solar industry as a whole, the expansion of solar-powered schools depends on market forces, cheaper technology, the adoption of solar-friendly regulations by states, and the outcome of the international solar tariff trade case, said Shawn Rumery, SEIA director of research.

In Middlesex County, construction is about to begin. Gretz is excited to learn alongside students about how solar energy works. “I don’t know anything about solar, I was an English teacher,” he said. “The kids will be involved and teachers are involved. It’s important for kids to see and have access to this technology.”