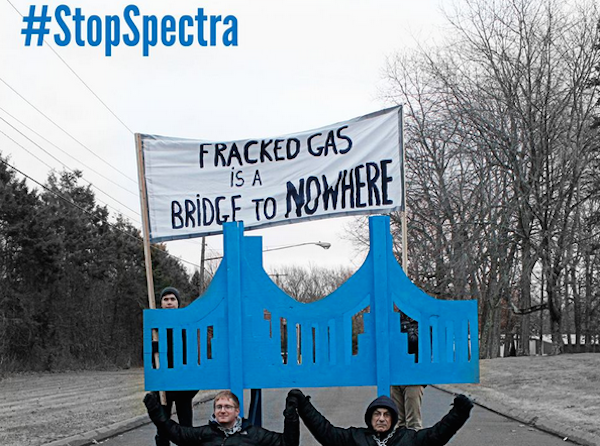 Police arrested two protesters this morning who chained themselves to a mock ‘bridge to nowhere’ and blocked the driveway to Spectra Energy’s methane gas compressor station in Cromwell. The demonstrators opposed Spectra’s proposed pipeline expansion, which would expand this compressor station, among others.
“When politicians say fracked gas is a bridge fuel, they ignore the fact that fracking and gas pipelines cause enormous damage to drinking water, air quality, forests, and communities. Some scientific research shows that gas is even worse for the climate than coal and oil are,” said Dan Fischer, a member of Capitalism vs. the Climate who was arrested today. The compressor station, located a quarter-mile from Cromwell Middle School and one-hundred feet away from recreational Watrous Park fields, is a “major source of hazardous air pollutants,” according the Federal Energy Regulatory Commission (FERC). Health impacts from compressor station pollution include kidney and liver damage, lung damage, brain impacts, and leukemia.

This action was part of a coordinated “Week of Respect and Resistance” with actions from December 13 – 19 against the pipeline expansion in Connecticut, Massachusetts, New York, and Rhode Island.

Vittorio (Vic) Lancia, another member of Capitalism vs. the Climate who was arrested today, said that “Fossil fuel and nuclear companies are destroyers of the world, society, and life itself. We must witness. We must resist. Now. Time is short.” Dan Fisher further said, “If the authorities don’t stop Spectra’s pipeline expansion, then we will be back with more people and more resolve to stop it ourselves.”

Confronting climate change’s root causes, Capitalism vs. the Climate organizes non-hierarchically and takes direct action in solidarity with communities most impacted by the climate crisis. This action is part of the “Week of Respect and Resistance” to #StopSpectra. Donate to the fund to support this week of action: http://bit.ly/Stop-Spectra

Dan and Vic – who were arrested earlier this morning after locking-down and blockading the entrance to a fracked-gas compressor station in Cromwell, CT – have been released from jail!

Both chose to go limp after being placed under arrest and are facing three misdemeanor charges.

While Dan and Vic were released on personal recognizance, building a solid wood “bridge to nowhere” as an action prop wasn’t cheap. Please take a moment to donate to the action fund, which will go to supporting actions happening all week as part of the “Week of Respect and Resistance”:http://bit.ly/Stop-Spectra