Above: Cuomo climate protest April 23, 2018 Photo by Skip Dickstein of the Albany Times-Union

New York Governor Andrew Cuomo was protested in Albany on April 23 over his policies on the environment and climate change. Fifty-six people were arrested, among them Green candidate for governor, Howie Hawkins. 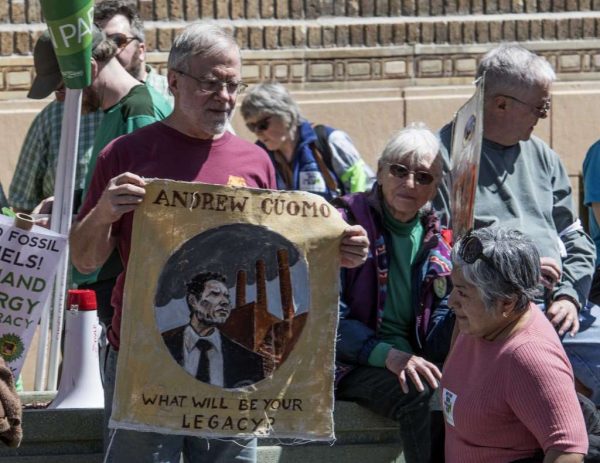 How Hawkins protesting Cuomo. By Skip Dickstein for the Albany Times Union.

Approximately 2,000 people, a multi-generational and multi-cultural mix of people, walked from the site of a proposed natural gas plant in Sheridan Hollow, a neighborhood with an aging power plant located in one of Albany’s poorest and predominately African-American neighborhoods, to the Capitol building to protest Cuomo’s energy policies. In addition to Hawkins, the protest included Cuomo’s Democratic primary challenger, Cynthia Nixon and the daughter of former Vice President Al Gore, Karenna Gore.

Nixon was critical of putting a gas plant in a neighborhood that has already suffered environmental racism from a plant that burned garbage. While she credited Cuomo with banning fracking, she said that was only a first step because the Cuomo continues to allow power plants and pipelines that rely on fracked gas.

Ted Glick described the civil disobedience portion of the action as” joyous, loud, beautiful-sounding singing” with people “gathered in a big circle in a room, ‘The War Room,’ on the same floor as the Governor’s office” The protesters “sat in a nearby hallway in a very big oval-like circle, lifting our voices as if the future depended upon it.”

In an op-ed explaining why it was necessary to risk arrest to save the planet from climate change, Hawkins described five decades of activism that has included civil disobedience for clean energy, against carbon energy as well as against nuclear energy. Among the protests he describes are The Last Resort protest against the Seabrook Nuclear Power plant, shown in this video.

In his campaign against Cuomo for governor, Hawkins is urging policies necessary to avert catastrophic climate change, writing, he is:

calling for a Green New Deal, which centers around building out a 100% clean energy system by 2030 and creating full employment and 50% lower power costs in the process. A study of how to do that in New York by Stanford and Cornell scientists and engineers found that this project would create over 4 million jobs in construction and manufacturing. The Holyman-Colton bill for 100% clean energy by 2030 ( A5105 / S5908 ) is pending in the state legislature that would require the state to plan such a transition. I also call for a progressive carbon tax to make corporate polluters pay for their damages and for a Just Transition to 100% clean energy that helps displaced workers, low-to-moderate income people, and communities on the frontlines of the damages and the costs of transition.

The protest was organized by a coalition of organizations and activists in New York, Cuomo Walk the Talk.