Above Photo: Keith Bedford/Globe Staff. Demonstrators were allowed to gather for a short time then asked to leave, police said. Those who did not were arrested.

State Police arrested six activists Monday at Logan Airport after dozens of activists flooded into a terminal to protest the treatment of workers at the travel hub, shouting slogans decrying “poverty wages” as some refused troopers’ orders to disperse.

The event came as part of a national string of protests to draw attention to the wages paid to people who perform airport jobs like checking bags or cleaning terminals and airplanes. Though the employees have jobs at airports, they generally work for companies hired by airlines.

At Logan, the workers are paid at least $11 per hour, but demonstrators on Monday argued that Boston’s high cost of living — and the importance of the airport jobs — calls for better compensation. They are among several service industry groups calling for a $15 minimum wage.

“I think it is important that people are treated with dignity and respect,” said Karl Celis, 23, who lives in Chelsea and works part time in baggage check-in at Logan. “People are struggling to make rent, buy food.”

Some of the workers are attempting to organize through the 32BJ SEIU union, which helped organize the protest and a march to Terminal E from the Airport Station on the MBTA’s Blue Line.

Organizers in at least eight other international airports planned similar actions on Monday, a date they said was meaningful because of Martin Luther King Jr.’s devotion to fighting inequality and his advocacy for workers’ rights.

The group also resorted to civil disobedience as participants sought to drive their point home.

State Police directed traffic as the group, which organizers estimated at about 200, made its way to the terminal. Troopers stood as the group assembled inside behind a banner that read, “Airport workers/Good jobs/Strong communities.”

Shortly before 1 p.m., a State Police official used a bullhorn to order the group to leave the terminal.

Most in the group, including all of the contract workers involved in the protest, turned back the way they had come, but a group of community activists and union organizers remained kneeling before police. Troopers waited a few moments, then cuffed them and took them away.

In a statement, State Police spokesman David Procopio said demonstrators were permitted to gather for a short time, then asked to leave.

“State Police had been notified previously by protest organizers that several members of the group planned to defy dispersal orders and be arrested,” Procopio said. “The arrests were peaceful and orderly.”

Those arrested were booked on trespassing charges and released pending arraignments that could take place as soon as Tuesday in East Boston Municipal Court.

In a statement Monday morning, the Massachusetts Port Authority, which operates Logan, said it “believes all workers should make a fair wage and experience acceptable working conditions.”

‘The $11 per hour rate for certain airport workers is among the highest in the country, and the highest minimum wage in the state.’

Jennifer Mehigan, spokeswoman for Massport, who said that the airport operator is “not inclined to oppose” a legislatively mandated wage of $15′

A Massport official said it has pushed for some airport workers to be paid more than the minimum wage.

“The $11 per hour rate for certain airport workers is among the highest in the country, and the highest minimum wage in the state,” said Jennifer Mehigan, a spokeswoman for Massport. Massport said it has also been in an extended dialogue with labor and community groups over issues involving private companies that service airlines at Logan.

Mehigan said Massport is “not inclined to oppose” proposed legislation to raise airport minimum wages to $15 per hour.

“We respect that the decision is up to the state Legislature and that perhaps any raise should apply to all workers,” she added.

Eugenio Villasante, regional spokesman for 32BJ SEIU, said after the arrests Monday that he hoped protesters had helped the public understand the inequality that workers face at Logan.

“Many of the workers who make sure that we get our luggage, that we get a ticket — many of them live in poverty,” Villasante said. 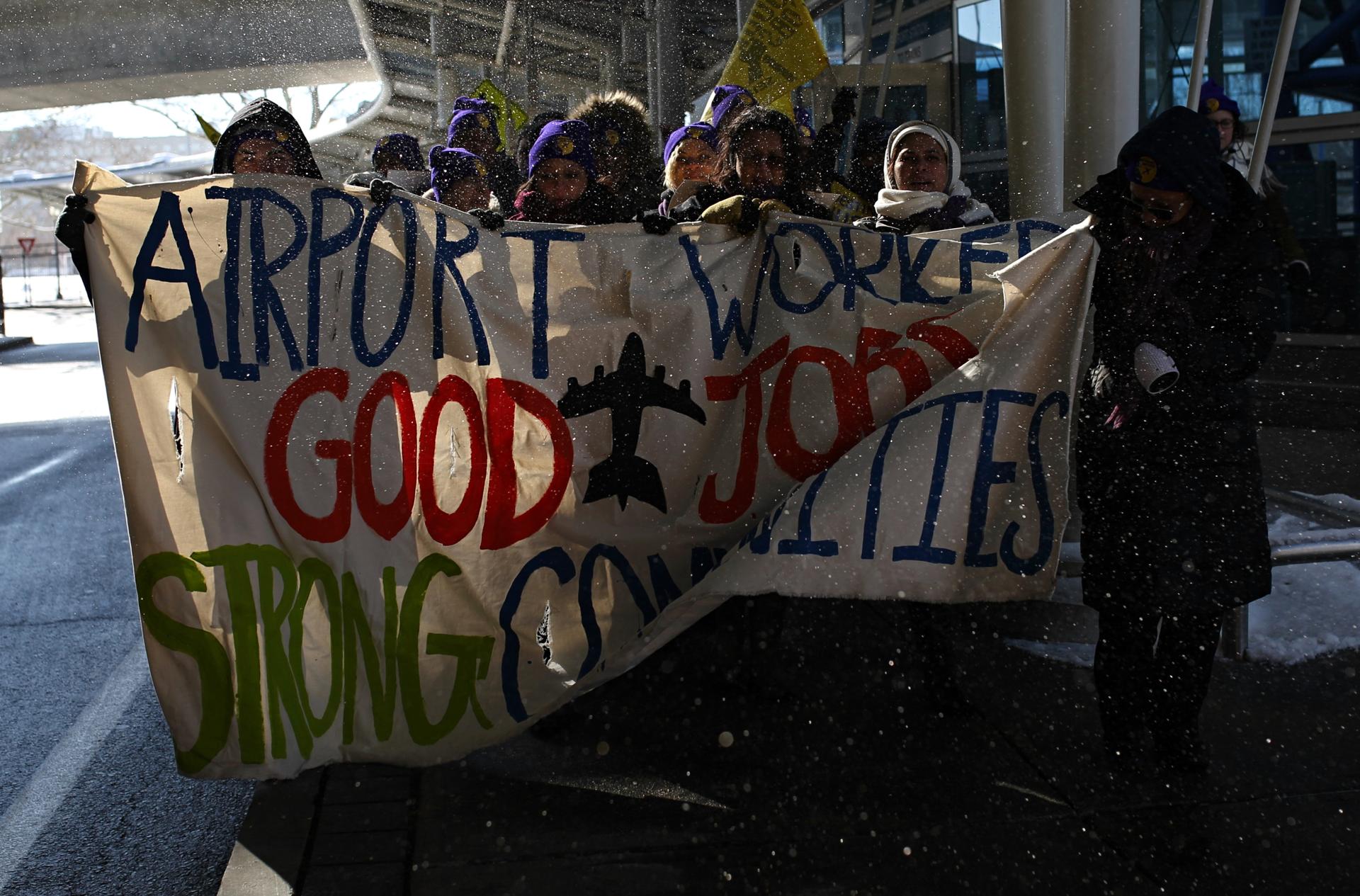 The protesters were seeking wages of at least $15 per hour for service-industry jobs such as checking bags or cleaning terminals and airplanes.