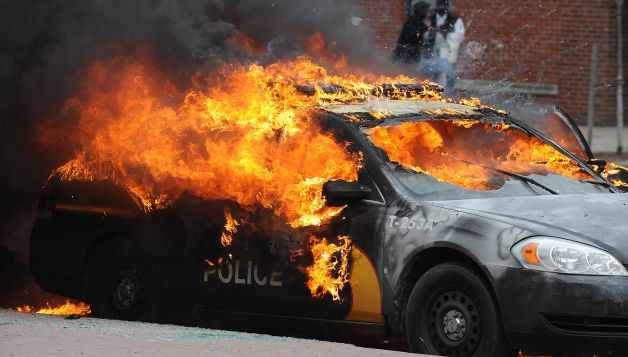 On April 12, 2015, Freddie Gray was jumped by six Baltimore cops for staring at one of them. Less than an hour later, after a ride in the paddy wagon, Freddie’s spine was 80% severed and his voicebox crushed. On May 1, 2015, District Attorney Marilyn Mosby indicted all six cops, some even charged with murder or manslaughter. 5 things you need to know:

Urban Rebellions Work. Go ahead. Decry the violence and people “destroying their own neighborhoods,” where they don’t even own anything. I will attempt to refrain, at least here, from pointing out fallacies in the argument. The reality, however, is that this indictment could only have happened in the context of the Ferguson- and now Baltimore- rebellion.

The costs associated with urban rebellions- in profits, government budgets and even global prestige- and the fear of even greater costs through continued or spreading rebellions, is of such great consequence, that those in power are suddenly confronted with an actual dilemma: do we continue unequivocal support for the armed wing of the system (the police) and incur the wrath of oppressed Black people OR do we indict them for actual crimes (not the same as throwing them under the bus) and take some steam out of the rebellion?

If you believe nothing else, believe this: when it costs more to maintain systems of injustice than to end them, those systems will end. Spontaneous urban rebellions cost the system millions. Just imagine the unjust systems we will destroy with organized rebellion.

This is a victory for Black people fighting back in Ferguson, Baltimore and beyond!

System is Still Broken. Just because it happens to be 12:36pm doesn’t mean your clock is not broken. The system was broken before the indictment and the system is broken after the indictment. If, on the one hand, you believe the indictment came as a result of a single brave DA, in the form of Marilyn Mosby, what happens in other cities or when she is gone from Baltimore? If you believe the indictments are the result of urban rebellion, what happens when those threats dissipate? The system itself is not working for working class, poor and Black people, and we cannot lose sight of that fact. We end unjust systems, not just get an indictment for one of it’s many victims.

This is the First Step, not the Victory. Much can still go wrong. If the indictments are a cynical attempt to take the steam out of a growing movement, the DA will throw the case against the cops, clearing the way for a not guilty verdict.Don’t believe it? After murdering Trayvon Martin, George Zimmerman was not even arrested and the DA said there was no cause for indictment. In response to protests, Zimmerman was finally charged, but the DA put on a weak case ensuring no acquittal. The same was the case with Darren Wilson’s farce of a grand jury process for murdering Mike Brown in Ferguson, MO.

If, on the other hand, DA Mosby is demonstrating moral fortitude, she can still be undermined by the rest of the system. If, in a year, Mosby is disbarred, unemployed and facing charges herself, we know the Empire has struck back. This is not the victory.

These indictments have not reduced the unemployment rate, given people access to health care, improve education or freed inner cities from grime and pollution.

The real fundamental issue is that Black communities serve as domestic colonies in the US. Martin Luther King, Jr. said “ The problem that we face is that the ghetto is a domestic colony that’s constantly drained without being replenished. And you are always telling us to lift ourselves by our own bootstraps, and yet we are being robbed every day.”

The police serve as an occupying army enforcing that colonial relationship. Until we address this root cause, urban rebellions will continue.

We Want Black Power. While there is no denying the importance of the indictment, in one respect it changes nothing. If Black communities are a domestic colony occupied by the police, we cannot continue to beg that colony- even when provided with Black colonial officials- for justice.

Police cameras, civilian review boards, changing the police bill of rights and the like, fail to do the most important thing: fundamentally shift power by ending the occupation and the colonial relationship. That can only happen with Black Power. That can only happen when Black communities can exercise Community Control Over the Police.

That must be our objective and demand for this time- Black Community Control Over Police, and then every other aspect of our lives.