The protest was one of 16 at major national airports on behalf of 20,000 airline-catering workers, both those at subcontractors LSG Sky Chefs and Gate Gourmet and those directly employed by United Airlines.

“We’re here to ask American Airlines just to hear us out so they can go back to LSG Sky Chefs and ask for better wages so we can live comfortably on just one job,” LSG driver Nadia Small-Lewis, 41, of Brooklyn told LaborPress.

About 60 people, including UNITE HERE Local 100 President Bill Granfield, were arrested when they blocked the roadway between the traffic island and Terminal 8, American’s base at JFK. Port Authority police repeatedly blasted a recorded message warning against resisting arrest before escorting them to a nearby bus, generally not handcuffing them except for the last dozen or so.

Earlier, a group of about 50 people staged a “die-in” inside the terminal, lying on the floor for about five minutes to dramatize that workers have inadequate or no health benefits. At a signal from a marshal, they got up and left before they were arrested.

The workers are trying to recoup concessions made when airlines were facing bankruptcy after the 9/11 attacks, said UNITE HERE spokesperson Alyssia Osorio. United’s catering workers have voted to strike, she said, but because they work in interstate transportation, can’t walk out legally until the federal National Mediation Board releases them. The LSG Sky Chefs and Gate Gourmet contract talks are also in mediation.

UNITE HERE represents almost 1,500 catering workers at JFK, about 1,200 at LSG Sky Chefs and about 280 at Gate Gourmet. The union is demanding that American insist that its subcontractors give their workers better pay and benefits, Local 100 secretary-treasurer Jose Maldonado told the crowd.

“What the airlines are doing is through their subcontractors, they’re trying to wash their hands and not care about us,” declared UNITE HERE recording secretary Gwen Mills.

Health care is the major issue, says Osorio. “We’re fighting for affordable health insurance for airline catering workers,” Granfield told the rally. A UNITE HERE survey of about one-seventh of the 4,100 SkyChefs workers at American’s hubs found that 30% had no health insurance and 35% relied on government-subsidized care for themselves or their children. 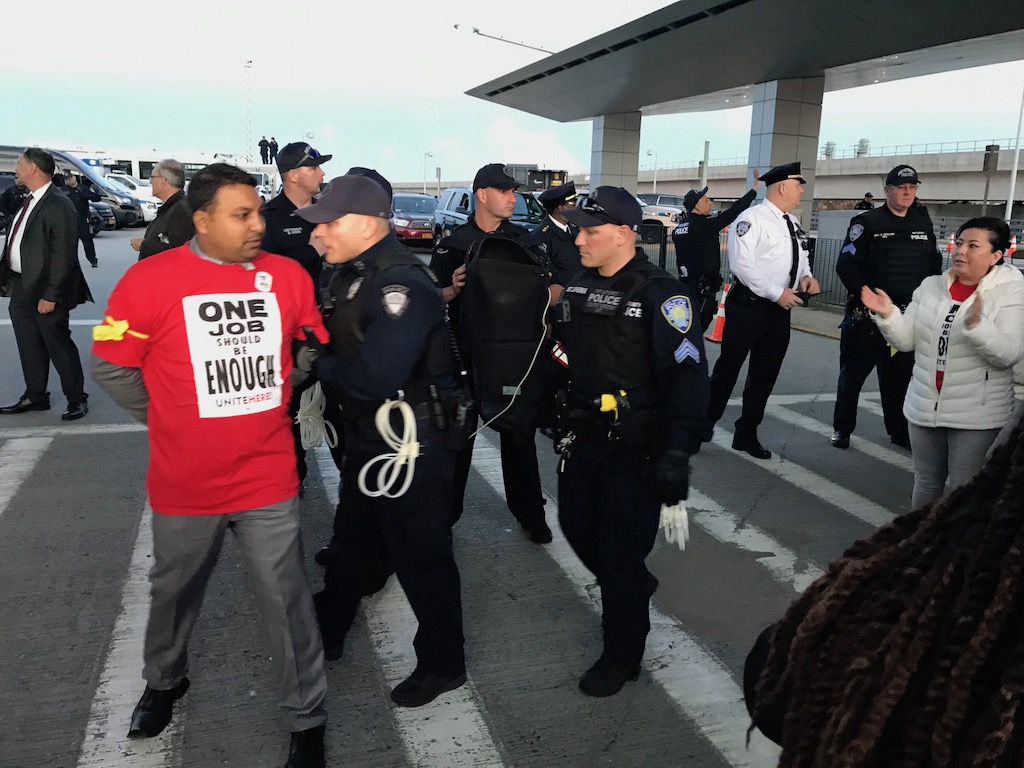 American made $1.9 billion in profits in 2018, Mayor Bill de Blasio told the rally, “and they have no right to deprive you of your basic human right of health care.”

“We are confident that, with the ongoing assistance of federal mediators, the catering companies and UNITE HERE will negotiate new nationwide agreements that increase pay and benefits,” American said in a statement. “We understand that new labor contracts between UNITE HERE and LSG Sky Chefs and Gate Gourmet will result in increased costs for their many airline customers, including American. We are not in a position to control the outcome of their negotiations or dictate what wages or benefits are agreed upon between the catering companies and their employees.”

Sasha Zetrane, a food-preparation worker at LSG Sky Chefs for 12 years, told LaborPress she had no health insurance. Small-Lewis does, but it’s expensive: $50 a week in premiums, and a $60 copay to see a specialist, which she needs to several times a year.

Pay is another issue. Catering workers in New York make the Port Authority minimum wage of $15.60 an hour, which is scheduled to go up to $19 in 2023. Nationwide, according to UNITE HERE, one out of every four workers at American’s caterers gets less than $12. Small-Lewis earns $18, but says, “that’s still not enough living in New York City.”

“We’re protesting to let the airline know what’s going on at SkyChefs,” said Juan Blanco of Queens, a Colombian immigrant and father of three who’s been driving for the company for 15 years, speaking in Spanish through an interpreter. “We don’t have a fair wage, affordable health care, or a retirement plan.”

The rally was loud, chanting “One job! Should be enough!” call-and-response style, or “¿Que queremos? ¡Seguro! ¿Y cuando? Ahora!” to the beat of a woman drumming on an empty water-cooler jug. Hotel Trades Council, New York State Nurses Association, and Transport Workers Union members turned out in solidarity. UNITE HERE contingents came from Newark, Local 217 in New Haven, Connecticut, and Local 26 from Boston.

“They’ve got deplorable conditions,” said Local 217 member Stephan Alderman. “No benefits, and they haven’t received a raise in years.”

Osorio says the union is meeting with the catering companies regularly to try to reach a deal. “We want this to work,” she says. “We need this contract. We can’t wait for Medicare for All.”

“We would like the government to hear us out so they can release us, so that way we can strike,” said Small-Lewis.