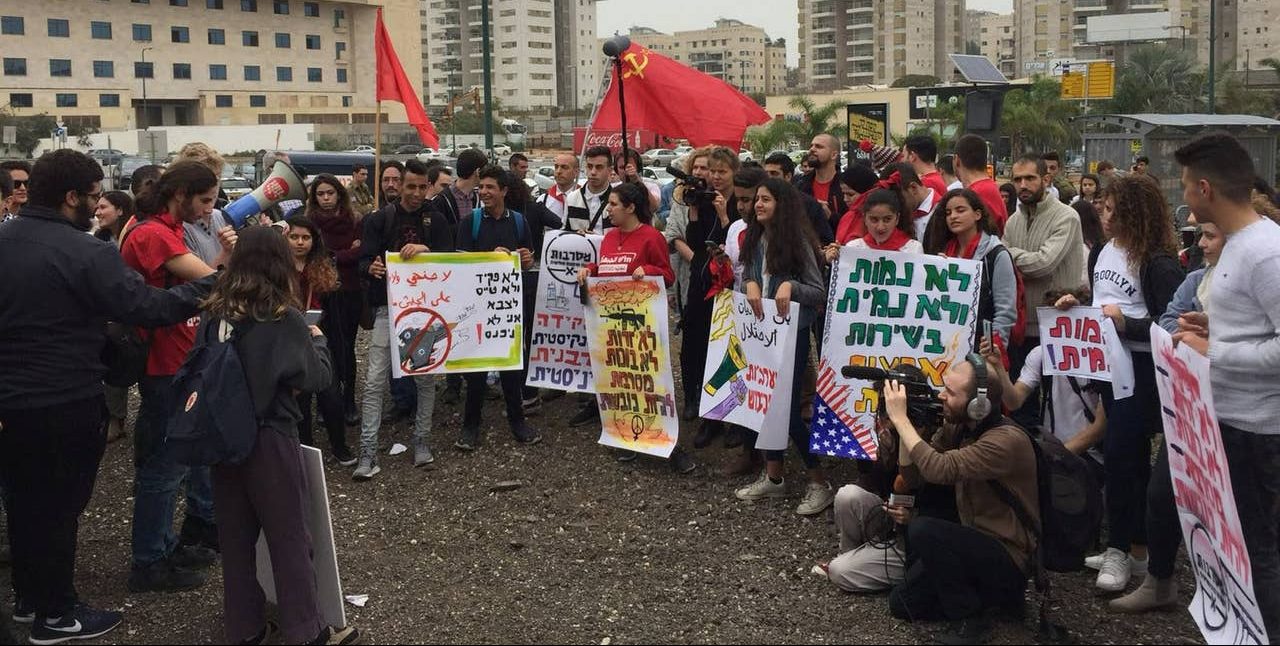 60 High School Seniors Refuse To Serve In The Israeli Army

Above photo: A demonstration outside an IDF enlistment center in 2018. Dror Mizrahi.

The group’s members say in a letter their stance comes from ‘taking responsibility for our actions and their implications,’ and accuse the education system of ignoring the Palestinian narrative.

Sixty Israelis of eligible draft age have signed a letter declaring their refusal to serve in the military because of Israel’s occupation of the Palestinian territories.

Departing from previous letters of this kind, the signatories call out the country’s education system for various issues, such as encouraging enlistment in the Israel Defense Forces and emphasizing the Jewish narrative in Bible and history classes.

They also draw attention to issues they say the curriculum ignores, such as the expulsion of Arabs in 1948 and the current violation of human rights in the occupied territories.

In a letter sent Tuesday to the defense and education ministries and to the IDF chief of staff, the teens wrote: “The state demands that we enlist into an army that is ostensibly meant to ensure the existence of the state. But in practice, army operations are not directed mainly at defending against enemy armies, but at subjugating a civilian population. Thus, our mobilization has a context and implications.” They say their refusal to enlist is not an act of disengagement or turning away from Israeli society, but rather “the taking of responsibility for our actions and their implications.”

They added: “We grew up with the ideal of the heroic soldier, we sent them care packages, we visited the tanks they fought in, we dressed up as soldiers in premilitary training camps and we elevated their deaths on memorial days. The fact that this is the reality we’re all used to does not make it a-political. Enlistment is a political act, no less than refusal to do so.” The letter later refers to “the policy of apartheid as expressed in two separate legal systems, one for Palestinians and one for Jews” and “to the heritage of the Nakba [Arabic for “Catastrophe,” when more than 700,000 Arabs fled or were expelled from their homes during the 1947-49 Israeli War of Independence] and the occupation, as expressed in “societal racism, an inflammatory political discourse and police violence.”

One of the signatories, Daniel Paldi of Tel Aviv, said: “From a very young age we are raised to be soldiers. Civic classes don’t do much to change the one-directional course of the school system, its pinnacle arriving with the preparations for enlistment in high school.”

Paldi added: “Why is refusal to enlist perceived as a political action, but school activities meant to encourage enlistment seen as self-evident? It starts with school trips to Jerusalem and the Golan Heights, in which no political contexts are discussed. We’re only told about the battles. There’s an elephant in the room that no one is talking about.”

Paldi notes that on a school trip to southern Israel, the guides warned that “If we don’t work the land, someone else will take it.”

The state school curriculum does mention the issue of Palestinian refugees, but many schools prefer not to teach the subject. Paldi says: “Until we talk about the Nakba in class, how it happened that most of the Palestinians who lived here fled or were expelled, or about the theft of their possessions, we won’t understand how much the problem remains part of our lives. This is sweeping history under the rug. When I began to understand this, I immediately started thinking about what else we were ‘sold’ in school.”

After a struggle lasting months, including spending 56 days in a military prison, one of the signatories of the letter, Hallel Rabin of Kibbutz Harduf, was awarded an exemption from military service as a conscientious objector.

Rabin says the schools only teach the Jewish narrative. In history and civics classes, they present a zero-sum game, in which the right and justification for Jews to live freely automatically denies the rights of the other population.” She adds: “Ultimately, even in schools that try to broaden the picture, in matriculation tests pupils will write what they were told to.” The present letter stems from an understanding of how much schools affect the shaping of our consciousness, she says.