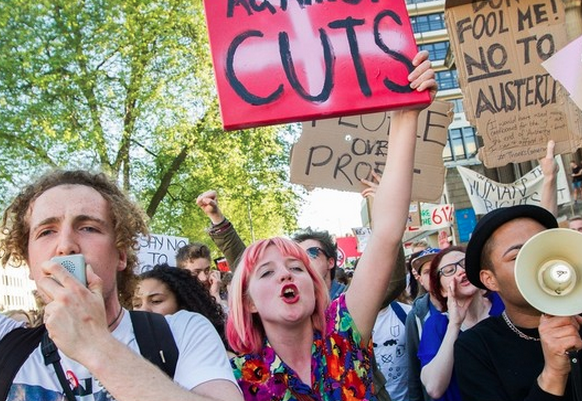 7 Teenage Girls Organize Mass Protest Against Austerity In The UK

Thousands of people flooded the streets of Bristol in an anti-austerity demonstration which was organised by a group of young yet determined women.

A group of seven teenagers organised the march, which opposed the Government’s austerity measures, on social media.

Support grew rapidly for the group, which called itself Bristol Against Austerity, and evening thousands of people packed every corner of Park Street as the demonstration snaked round the city centre.

Many of those who attended were angry, and the majority were young people bearing placards, who said they were disgusted at the Government’s attitude to the NHS and welfare spending.

Some people at the front chanted “Tory scum” and “no prosperity with austerity”, and the horde of people met in the evening sunshine on Broad Quay at 5pm, and slowly made their way up Park Street, around Clifton Triangle, and back down to Castle Park.

They were led by two police horses, and officers lined the route to direct traffic, but the demonstration remained peaceful.

She said: “The next five years are crucial in our lives, and the Tories are not very friendly towards students.

“High tuition fees hit the poorest hardest, and it means when we come out of university we will have debts that we can’t pay off.

“It makes it hard to lead an independent life and get on the property ladder.

“Although benefits cuts might not affect me directly, they affect others in Bristol and I don’t approve of them.”

As the march made its way up Park Street, bewildered shoppers stopped to watch its progress.

Drivers which were stuck in the resulting traffic jam beeped their horns in support of those on foot as they edged past.

The protestors came to a halt at one stage to let two fire crews passed amid cheers from the crowd.

By 6pm in the city centre, there were placards as far as the eye could see.

The protest ended in Castle Park with a huge cheer from the crowd.

Afterwards, one of the seven girls who organised the event, Hannah Patterson, 17, said: “We are just a group of seven young women. It was an amazing turnout, we didn’t really expect anything like it.

“We were talking on Twitter about how hopeless we feel, and we came up with this idea. It is brilliant so many people were there, and we want to say thank you to Bristol for keeping the event peaceful.”

Megan Flaherty, 18, I didn’t realise we would so much power to create something this big, it is amazing.

“We just felt lost before this, we didn’t know what to do after the election. It is great to know we are not alone.”

The girls are planning more demonstrations in the future, and said they want to support food banks.

Police confirmed no one was arrested during the demonstration.

The protesters were criticised by Conservative MP Jacob Rees-Mogg,

The North East Somerset MP said they were “tainted by lack of acceptance of democracy.

“I think they may have missed the General Election that took place last week, where the country endorsed the Conservative manifesto.

“I am all in favour of people’s right to protest, I think it is a very important right, but people have just voted. A decision has been taken which supported continued austerity.”

Earlier this week, fifteen people were arrested following clashes with police during an anti-austerity protest near Downing Street and Graffiti was sprayed on the Women’s War Memorial in Whitehall.