Translation partly based on articles by the german daily newspaper junge Welt:

The event in the Humboldt Hall at the Berlin Urania was organized by the daily newspaper junge Welt, on behalf of an alliance of more than 30 organizations, parties, media and initiatives.

Occasion for the meeting was that on the same day the German Foreign Minister Heiko Maas had on Tuesday representatives from 29 countries in Latin America and the Caribbean – including 21 foreign ministers – to a major conference at the Foreign Office. -only the  Venezuelan Foreign Minister was not invited to the conference.

The solidarity event at the Urania was attended by the Venezuelan Deputy Foreign Minister Yván Gil.

Actually even Maduro’s Foreign Minister Jorge Arreaza wanted to come to Berlin. But he had to short notice to a new round of negotiations between representatives of government and opposition in the Norwegian capital Oslo.

The Venezuelan Deputy Foreign Minister Yván Gil regretted that Foreign Minister Jorge Arreaza could not be present in person, as he had to take part in an extremely important task attending the peace talks in Oslo hosted by the government of Norway.

Deputy Foreign Minister Yván Gil said that in Venezuela the problems are not about the fate of a government, about Maduro or the PSUV. The real problem is a blockade that can only be compared to what has happened to Cuba.

Yván Gil went on to explain that Venezuela had been deprived of the opportunity to negotiate its debts like other states. The country has to fight to  continue exporting oil, as 90 percent of its revenues are based on this resource. The income of the Venezuelan oil company Citgo was confiscated by the US-government. Venezuela so far has lost more than 30 billion US dollars.

In order to understand the role of international banks plotting against Venezuela, it is important to know that these banks are located in Europe.

Deputy Foreign Minister Gil stressed the fact that the whole world must join the fight in Venezuela: „This is a class struggle that affects everyone.  The fight of David against Goliath.“

He said that the Venezuelan people have a very high morale and he felt sure that the current situation could be overcome, as the Venezuelans have done so during the last 20 years since the opposition has never recognized any victory of the Bolivarian revolution.

He also explained that during the past 20 years there have been a total of 25 elections in Venezuela and the Socialists have won 23 of them, but not one has been recognized by the opposition. He went on to call this is a corrupt and anti-democratic attitude of the opposition.

After Gil finished his speech the Foreign Minister of Venezuela, Jorge Arreaza spoke by audiostream from Oslo to the guests in Berlin. He finished  his speech, in which he went into further detail of the problems Venezuela is facing now by saying:
„We are proud that you support us in Germany, in Europe and throughout the world. Unfortunately, there are numerous governments supporting Trump’s war machine. We hope that these countries will finally recognize international law. We seek peace through dialogue. Thanks to those who support us and demonstrate each week on Saturday at the Brandenburg Gate for our cause. Long live long live socialism long live the sovereignty of
the peoples. « 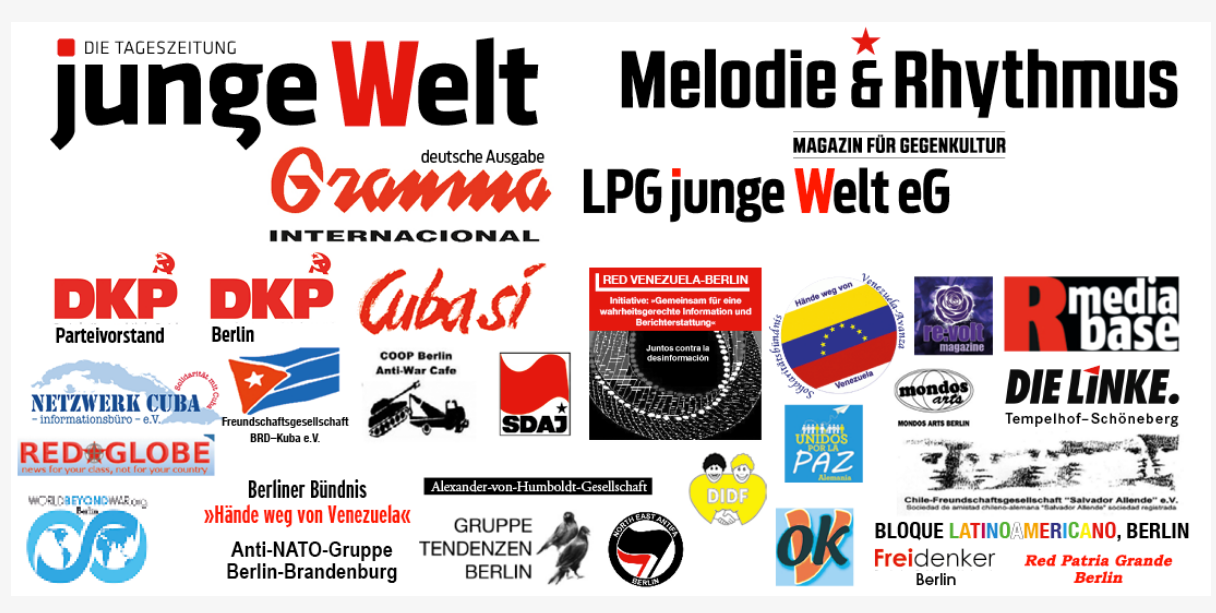 The first speaker of the event at the Urania was Carolus Wimmer, the International Secretary of the Venezuelan Communist Party and Member of the Latin American Parliament. Wimmer stressed that the aim of the event is to counter the false news, which are being spread in the media to defame the Venezuelan government under President Nicolas Maduro.

Carolus Wimmer reminded the guests that the US foreign policy with the Monroe Doctrine („America to the Americans“) has been claiming the entire continent as its zone of influence for almost 200 years. The class struggle in Latin America is an everyday experience of the people. He drew attention to the economic difficulties arising from the transition from capitalism to socialism, which can also be observed in Venezuela. But what has been achieved must be defended. The people are supporting the legitimate President

Maduro and the new opportunities for participatory democracy in the country.
Everything else is false news he went on to explain. The institutions are stable. In addition, more than 140 countries are recognizing the government of Maduro, including Russia and China. At the end of his lecture, he once again pointed to the important signal of solidarity that the event in Berlin represents. Events like this, that take place in many cities around the world did so far prevent the US from intervening militarily. .

His speech as followed by the journalist Hernando Calvo Ospina, born in Colombia, who lives in France and works mainly on issues concerning Latin America. He stressed that Colombia’s „narcoparamilitarism“ poses also a serious threat to Venezuela today. Behind the US threat of military intervention, paramilitarism poses the second biggest threat to Venezuela.

Calvo Ospina stressed that paramilitarism is a means of repression against the people, financed by dirty money. Paramilitarism, as an extension of the army, of the state, has done the dirty work of the powerful, and from the beginning was directed against the social gains in the countries of Latin America. It has be directed against Nicaragua, Cuba, and later it has been also used in Columbia.

Hernando Ospina reminded the audience that there are nine official US military bases in Colombia. After the peace agreement with the left-wing guerilla FARC, the paramilitaries immediately poured into the vacant areas, including the border region to Venezuela. „We can not allow paramilitarism to control the border regions, and fortunately, there are still guerrilla organizations,“ said Ospina. The Venezuelan government must therefore protect its border with Colombia. Venezuela is the crown for US imperialism because of its oil resources, and Cuba is the jewel in the crown. Therefore, the Bolivarian revolution must be defended at all costs.

Another speaker was Orhan Akman, trade unionist in the administration of union Verdi and many years working for the international service union UNI-Global-Union in Colombia and Peru. He first defined the role of the unions and the fact that their declared principles not include to stand for social gains but also to stand for peace. He referred to the long tradition of trade union solidarity with Nicaragua. It’s about time that Unions again participate in events like this. But he complained, that the position of unions towards military conflict have changed. Today they fail to respond and follow the political mainstream ever more. Orhan Akman, was reminded that he could address the event only as a private person, and not on behalf of his union.

He went on to address the German Foreign Minister Heiko Maas (SPD), who in the run-up to the EU parliamentary election warned against a strengthening „right-wing radicalism“ but at the same time met with the President of Brazil, Jair Bolsonaro, a „real fascists.“ That is unbelievable, so Akman.

He also quoted the Bolivarian constitution in excerpts and compared them with german laws. „There are things that Germany can learn from.“ Thus, the constitution contains labor law dispositions that go far beyond what German employees could invoke. Also the issue of gender justice finds its expression in Venezuela: housework is recognized as an equivalent economic activity and equal pay for equal work is the rule.

The Alliance „Hands off Venezuela“ unites over 20 organizations and organizes rallies in front of the US Embassy at the Brandenburg Gate in Berlin every Saturday since January.

Gerhard Mertschenk, as the a member of the alliance explained that many Germans are concerned and Latin Americans from various countries see great parallels to the history of the US-aggression and Coup d’États in their countries. Mertschenk considers the purpose of the rallies and actions of the Alliance to be twofold: On the one hand directed to the outside, whereby it is important to express the solidarity of the Venezuelan population. On the other hand it is important to educate the public about biased, and false media reports and inform on the reality.

The German Communist Party DKP reacted immediately after the self-proclamation Guaidós, as Patrik Köbele explained. When asked why his party supports Venezuela although it is not yet a socialist country, Köbele made it clear that this is not just concerning Venezuela, but also Cuba. At this moment, it is crucial that international solidarity exert political pressure, which is why he also supported the previous call for trade union solidarity. In Venezuela, a daily class struggle is taking place, from which the socialist revolution must develop. The capitalist class, whose representative is Guaidó, must be finally overthrown.

André Scheer from the daily newspaper junge Welt also addressed the colleagues from the Latin American news channel TeleSur. The whole event was live-streamed and translated to spanish.

The politician Andrej Hunko, German Left Party (Die Linke) then reported about the Summit convened by German Foreign Minister Heiko Maas at the same morning in Berlin: Hunko reported on the fact that Heiko Maas spoke of his recent trip to Latin America as a trip to friends. He, Heiko Maas described Bolsonaro as a friend, which was „really unbearable,“ according to Hunko. Further striking was the strong presence of the German industry at the meeting with Maas, and the keynote speaker was not just the foreign minister but Joe Kaeser from Siemens. One main topic was the need for strong participation of the German economy in Latin America, especially in competition with China.

Andrej Hunko also reminded that Norway is currently trying to mediate diplomatic talks on the situation in Venezuela to have a positive effect. Venezuelan Foreign Minister Arreaza is also present there. „I would like to see German foreign policy playing a role like Norway,“ Hunko said.

The left-wing politician then spoke briefly about his recent visit to Venezuela. There was quite some uproar in the german media how he could meet with Maduro. At the same time, Hunko stressed that he has never experienced so much public support after returning from Venezuela. Also within his own party there was strong support and no public negative reaction from sections within his party who disagree with his positions, as he explained.

Anchorwoman of the evening was the actress Esther Zimmering.

At the end a resolution was passed:
Hands off Venezuela! Resolution of the Solidarity Event in Berlin on May 28, 2019
https://www.rosa-luxemburg-konferenz.de/en/hands-off-venezuela