The protest comes just days after the killing of 17 Palestinian protesters and the injuring of 780 more by Israeli live fire near the Gaza border.

BOSTON, MA: This morning, on the fourth day of Passover, Boston Jewish Millennials locked themselves to the Israeli Consulate of New England and called for an end to Israeli violence against Palestinian protesters in Gaza, which resulted in the death of 17 protesters while injuring more than 1,000 others last week — the deadliest day in Israel/Palestine since the 2014 Gaza War, also known as Operation Protective Edge.

“At the Passover Seder, my family and I talk about our community’s journey toward freedom as part of an ancient ritual done in Jewish households across the world. After over a decade of the Israeli blockade and three bombardments, that is exactly what Palestinians in Gaza want: freedom,” said Sarah O’Connor, who was one of eight IfNotNow members that chained themselves to the doors of the Israeli consulate.

On Friday, just hours before Passover began, more than 30,000 Palestinians marched in Gaza and were met with live fire by Israeli snipers. Some are saying that Israel predetermined the violent outcome, by declaring the protest violent days before it even occured. Following the high number of casualties, Avigdor Lieberman, Israel’s defense minister, rejected appeals for an inquiry into the behavior of Israeli soldiers, saying the soldiers involved “deserve a medal.”

“The Israeli turn toward violence against protesters is the inevitable result of more than 50 years of Occupation. As we mourn the lives lost, our generation insists that endless occupation and needless loss of life are not the way forward. I don’t want my children growing up seeing more images of Israeli teenage soldiers shooting at Palestinian teenage protesters. Another path is possible and we must fight for it: we can build a world that promises freedom and dignity for all.” said Shira Tiffany, who helped organize the protest.

In the days following the violence against Palestinians, various Jewish organizations rushed to defend Israel’s actions — including organizations that bill themselves as social justice leaders, such as the ADL and Boston Combined for Jewish Philanthropies.

IfNotNow is a movement led by young Jews to transform the American Jewish community’s support for the occupation into a call for freedom and dignity for all Israelis and Palestinians. IfNotNow has over 1,700 members and chapters in Austin, Boston, Chicago, Denver, Detroit, Los Angeles, Minneapolis-St. Paul, New York City, Philadelphia, Pittsburgh, the San Francisco Bay Area, Toronto, and Washington, DC.

You can learn more about IfNotNow at www.ifnotnowmovement.org 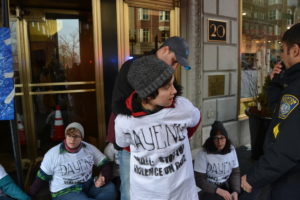 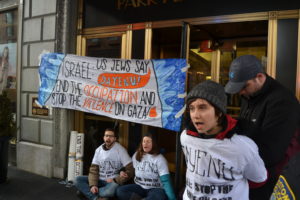 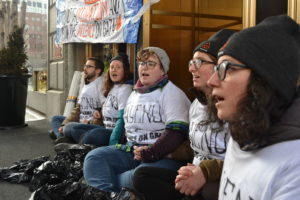