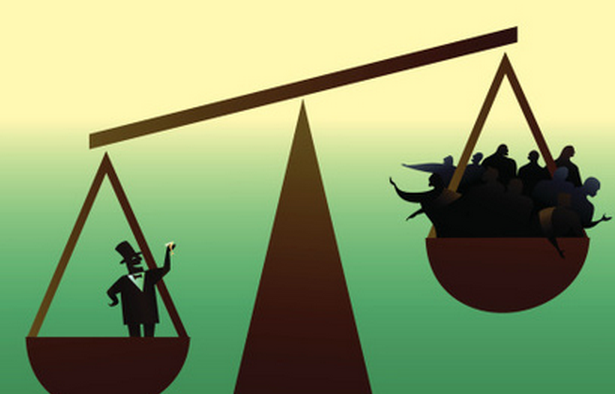 80 People Control Half Of World’s Wealth & All Elected Officials

The World Economic Forum Annual Meeting began this week in Davos, Switzerland.  The meeting convenes “global leaders from across business, government, international organizations, academia and civil society for strategic dialogues which map the key transformations reshaping the world.”  The hope is that the dialogue will lead to action on the part of the participating nations to improve conditions in their own communities, with an understanding that we are all globally connected.  The idea is that the actions in one community can affect another anywhere in the world.

The current state of global economic inequality shows just how tenuous that connection is.

In what has now become tradition, Oxfam International, a confederation of organizations dedicated to fighting poverty, issued a report on the current state of economic inequality. Last year’s report sent shockwaves through the world by announcing that just 85 people controlled the same amount of wealth as the bottom 3 billion people combined.  That was even more dramatic than 2010 when it took 388 people to control that much wealth.

Today, the bulk of the wealth is in the hands of just 80 people.

The reasons for the dramatic change are much as they have always been. The global recession had disproportionate negative effects on those in the middle and bottom of the economic scale. As most of the population slid down the scale, the recovery went quickly upwards. While the majority of the population relied on income, which decreased or disappeared, the rich had assets. Those assets grew in value just as the returns on investments began to bounce back. The rich got richer simply because with assets, it’s difficult to not remain wealthy.

Oxfam releases the report every year just as global leaders gather in Davos because the key to reversing the trend lies in the hands of government. The problem requires a coordinated global effort to tackle inequality, such as punishing tax dodging by corporations and wealthy individuals. Other initiatives include: Universal public services (i.e. health and education), shifting the burden of taxation from labor and consumption to capital and wealth, living wages, equal pay, and adequate safety nets that include a minimum income.

Interestingly, many of these policies have been promoted – and rejected – here in America.

Thirty-five of the 80 individuals controlling wealth hold American passports. Many of the names are familiar, such as Bill Gates, the Waltons of Wal-Mart fame, George Soros, Warren Buffett, both Koch brothers and Sheldon Adelson. It is also no surprise that many of these names are often seen on the same donor lists of politicians across the nation, Congress and our recent presidents. The Oxfam report notes than nearly 12 percent of political contributions come from the list of 80 billionaires.

In the first few weeks of the 114th Congress, legislation was introduced to roll back regulations on Wall Street, as well as consumer protection laws that have been in place. While voters have repeatedly said they want improved education, universal healthcare and a real chance at the American dream, our elected officials seem to not hear the public’s demands. These same elected officials are dependent on the money from the wealthiest, but are also responsible for creating policies that would reverse the flow of that wealth towards a more equitable distribution.

What we have here is not a failure to communicate but a clear and dangerous conflict of interest.

The inability to invest in assets, such as houses, savings, or highly expensive art has left the majority of the world with little to show for their hard work.  Global poverty has continued to rise and it’s only going to get worse. Oxfam has predicted that if we do nothing, the wealthiest one percent of the world will control the same amount of wealth as the other 99 percent do combined.

The estimated time of arrival for this global wealth distribution is next year.