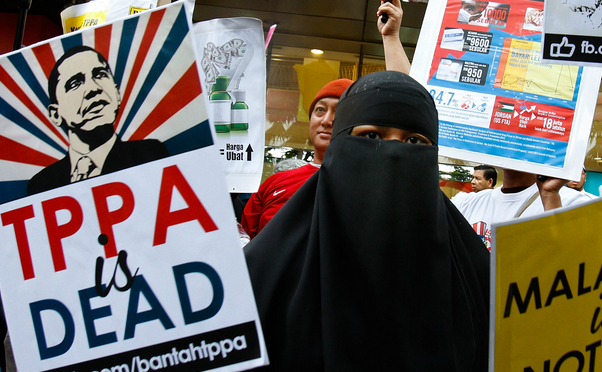 9 Ways The TPP Is Bad For Developing Countries

The Trans-Pacific Partnership (TPP) — a major new trade agreementunder negotiation among 12 countries in the Asia-Pacific region — received a shot in the arm in the United States at the end of June when Congress voted to grant President Barack Obama “fast-track” authority to negotiate it. The TPP has fueled considerable dispute. Reasons for this include the secrecy with which talks have been conducted, the agreement’spotential effects on U.S. jobs and growth, and its geopolitical implications. But one issue that has received comparatively little attention is how the TPP is likely to impact the developing countries slated to join.

The United Nations designates six of the 12 TPP members — Brunei, Chile, Malaysia, Mexico, Peru, and Vietnam — as “developing countries.” If enacted, the TPP could block these countries from successfully industrializing and joining the developed world. What would this mean in practice? Blocking industrialization would mean locking these countries into low-end agricultural and extractive industries, preventing tens of millions from accessing higher-paying jobs in the manufacturing and service sectors. Domestic tax bases would stay too low to adequately finance social protection, investment in health, and education. High levels of poverty would remain. And the cost in human potential would be all but incalculable.

All of this because of a trade deal?

Yes, the TPP really is that bad.

Yes, the TPP really is that bad. Here are nine major ways the agreement would stunt the national economic development of its developing-country members:

We don’t let professional NFL teams play football against toddlers, but this basic truism is tossed out when it comes to economies in the TPP. The TPP members that are already rich and industrialized (Canada, the United States, Japan, Australia, and New Zealand) are aggressively seeking uniform tax and financial policies and low levels of regulation around the world in order to reduce operating costs for their multinational corporations — which had a hand in drafting the text of the agreement. They claim that in today’s globalizing economy, trade agreements must be based on “fairness” and “a level playing field” — premised on the idea that a government’s tax, financial, or trade policies should not provide preferential support for domestic companies.

But though the TPP’s six developing-country members are each at very different stages of economic development, what they all have in common is that their domestic firms are far less advanced and competitive than those from the more advanced economies. Correspondingly, each of these countries needs to support its domestic industries with its own unique mix of subsidies; long-term, low-interest subsidized credit; supportive technology policy; and research and development. The TPP would forbid many of these policies in the name of “fairness,” ignoring the fact that its developing and developed members are at different stages of economic development and, therefore, have diverging needs.

Going further than current World Trade Organization rules, the TPP seeks deep cuts in quotas, tariffs, and other protective trade policies, ensuring that nascent manufacturing industries in its developing members will face massive competition from far more competitive foreign firms. The TPP would also prohibit levying taxes on the export of raw materials — a policy that encourages such resources to stay at home and be available for use by domestic manufacturers. But this demand that all should play by the same rules and lower their levels of trade protection in equal measure is especially egregious because it defies the historical record and its key lessons about what developing countries must do to industrialize successfully. In fact, today’s rich countries developed their manufacturing sectors with high levels of trade protection and other state support, often for decades at a time, until they were finally able to compete in world markets. They realized, through trial and error, that trade should be liberalized only after domestic firms become competitive internationally — not before.

The rich countries in the TPP negotiations are demanding that foreign corporations be allowed to compete with domestic companies for government procurement contracts. But historically, countries have used procurement as an explicit form of assistance for their domestic firms. This has led the Malay Economic Action Council to warn that “if Malaysian Government procurement was conducted on a level playing field, many Malaysian companies would go under.”

The TPP proposes that no special regulations be allowed to apply to foreign investors, meaning they must be treated no differently from domestic companies. But this is another example of hypocrisy — most industrialized countries long used “local content” rules and other regulations to ensure that foreign investment transferred technology and purchased local goods and services to boost domestic sectors. However, according to a leaked draft of the TPP’s Investment chapter, any policies that favor local ownership would be considered “discriminatory” and prohibited.

To enforce the TPP’s new deregulated standards, it also proposes to radically extend the traditional definition of “unfair expropriation or nationalization” of a foreign investment to include “the expectation of gain or profit.” Thus, it allows a corporation to sue a signatory nation for enacting new regulations or laws — even those that address public-interest concerns like labor and environmental rights — if it believes these would deprive it of “expected profits.” According to this investor-to-state dispute settlement (ISDS) mechanism, already found in many recent trade and investment agreements, if a new law or regulation ends up costing foreign investors “lost planned profits,” they can sue the government to either get rid of the law or pay up to hundreds of millions of dollars in fines and penalties to the investors. The ISDS feature takes disputes out of domestic courts to secretive international tribunals that have the power to overturn judgments of national courts and offer no chance for appeal. For example, the tobacco giant Philip Morris is presently suing Uruguay because the latter’s public health regulations on cigarette advertising are hurting the sales it had “expected” there.

While rich-country trade negotiators say that such assurances for investors are needed to attract foreign investment, Nobel laureate and economistJoseph Stiglitz notes that many multinational corporations already have investment insurance through either their own governments or the World Bank’s MIGA and that the real reason for ISDS is political: to create “a chilling effect” in the less advanced TPP countries, in which the threat of lengthy, multimillion-dollar lawsuits is enough to make governments reluctant to adopt laws or regulations that may offend foreign investors. In so doing, foreign corporations seek to achieve by stealth — through secretly negotiated trade agreements — what they could not attain in an open political process. Although a growing number of developing countries around the world (Brazil, India, South Africa) refuse to allow ISDS clauses in future agreements, the TPP apparently still includes the provision.

The TPP goes against new thinking on best practices regarding capital controls — restrictions on the ability of investors to bring in or take out vast amounts of capital from countries overnight. Even the IMF reversed its long-standing opposition to capital controls in 2012, finally agreeing with mounting research showing that capital controls may be useful in ensuring financial stability in a crisis by stemming sudden outflows or disruptive inflows. Yet despite this new conventional wisdom, the TPP would block developing countries from using capital controls.

As if nothing was learned from the 2008 financial crisis, the TPP also calls for a whole range of financial liberalization rules that would block countries from regulating speculative financial activities and would further deregulate the financial services sector. Economist Anton Korinek of Johns Hopkins University explained that such excessive financial deregulation is similar to relaxing safety rules on nuclear power plants: It may reduce costs and increase profits for the nuclear industry, and may even reduce electricity rates — while increasing the risk of a nuclear meltdown. Similarly, financial deregulation increases the profits of the financial sector at great risk to the rest of society, and it threatens the financial stability of developing and developed TPP members alike.

Many health groups such as Doctors Without Borders have campaigned against the TPP because its rules on intellectual property rights (IPR) would keep cheaper generic drugs out of reach for millions of poor people in developing countries. According to a leaked draft of the IPR chapter, the TPP would greatly extend existing patents and copyrights on essential drugs and expand the scope of patents and copyrights beyond finished products to include coverage of many components of finished goods. If enacted, such rules would considerably undermine developing countries’ ability to address public health needs — meaning that more people would die.

The IPR chapter would also significantly stunt the development of manufacturing firms in developing countries because it would considerably raise the costs of and create new barriers to accessing needed manufacturing technologies, thereby hampering firms’ ability to engage in reverse-engineering — a key step in the learning-by-doing process used by all rich countries when they were first developing.

The TPP proposes breaking up state-owned enterprises (SOEs), which have been cornerstones of East Asia’s successful industrialization strategy for many decades. Not only would the proposed reforms significantly curtail state support for such firms, but they would also commercialize current SOEs in Malaysia, Vietnam, and Singapore. These countries would be locked into such constraints going forward and would be prevented from offering state support to any new or future SOEs. Once again, this blocks developing countries from using strategies that rich countries used themselves. As rich countries learned long ago, when private investors are unable or unwilling to invest in strategic sectors, the state needs to step in and play the role of “entrepreneur of last resort.”

Some developing-country policymakers in TPP countries may be agreeing to these rules in the belief that accepting them is necessary to attract foreign investment and secure participation in global value chains. Others, it is widely believed, think that signing onto the TPP will give them some added protection from China’s growing influence in the region. If so, such shortsighted strategies may come at the high price of forgoing successful long-term national economic development.