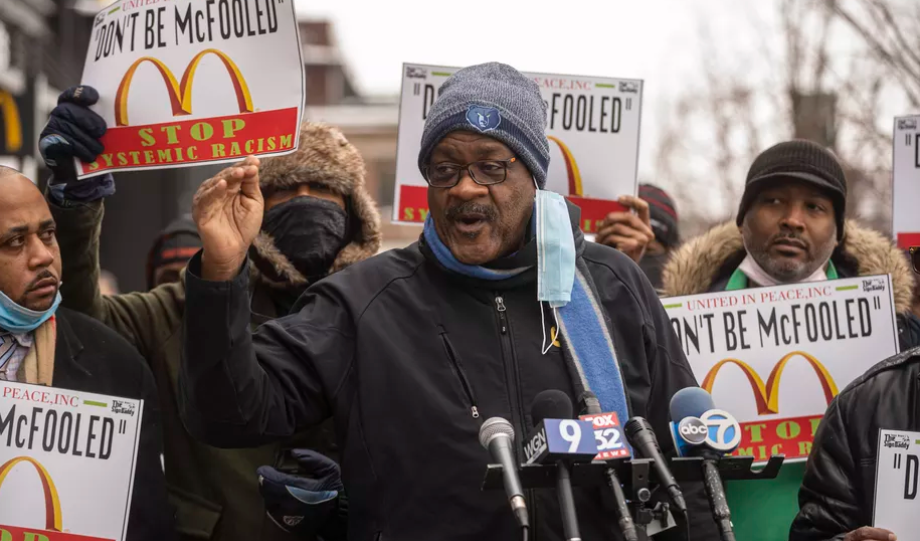 Above photo: McDonald’s franchise owner/operator James Byrd speaks at a news conference outside the restaurant chain’s global headquarters in the West Loop. Byrd, his brother and other activists urged McDonald’s to end what they say is systemic racism that has denied Black franchisees equal opportunities. Anthony Vazquez/Sun-Times.

Chicago – Community organizers on Monday kicked off 90 days of picketing at McDonald’s world headquarters in the West Loop, hoping to call attention to what they say are discriminatory practices against Black-owned franchises.

“We are coming after every McDonald’s that we shop in,” activist Mark Carter said Monday morning. “We send this message starting today that if you don’t want to see us outside of your headquarters, then it would be in your best interest to sit down with those who have traveled 700 miles from Memphis, Tennessee.”

The protest was organized ahead of a meeting scheduled for Tuesday in Chicago between McDonald’s executives and two brothers from Memphis, James Byrd and Darrell Byrd, who own four locations between them. The Byrd brothers filed a class-action lawsuit against the company in October, alleging McDonald’s growth has been “predatory in nature” against Black-owned franchises.

“McDonald’s has denied the Black franchisees the same opportunities as white operators and continually steer them to economically depressed and dangerous areas with low volume sales,” said Wallace “Gator” Bradley, president of United in Peace, a political activist group fighting for the needs of the Black community.

The company issued a statement in response to the protest.

James Byrd said some now-shuttered locations were closed over the years after McDonald’s “deemed them to be of no value.” It happened to other Black franchisees too, he said.

During the late-1990s, James Byrd said, McDonald’s had about 377 Black franchisees nationwide; that has dwindled to about 186 today.

James Byrd also alleged there is a $900,000 annual cash flow gap between Black franchisees and white operators — $2.9 million versus $2 million.

The Byrd brothers argued McDonald’s has put Black operators in economically distressed communities with high levels of crime, leading to higher costs, such as for security, insurance, employee turnover and even rent.

“The right thing is not being done to African American operators in America with our company,” Darrell Byrd said. “I’m still trying to figure out why? Why am I struggling? Why am I paying higher rents for my restaurants? Why am I paying a greater fee to be in the same business as my white counterpart?”

They want McDonald’s to grow the Black owner base back to 377 or more by creating a “minority franchise fund” that will pump a minimum of $500 million into a new base of franchisees. They also want to loosen the regulations and inspections, imposed by McDonald’s, that sometimes are used to break franchise agreements.

A similar lawsuit was filed earlier this month by former Major League Baseball player Herbert Washington claiming the company’s discriminatory practices led to a $700,000 sales gap between Black-owned franchises and those owned by white people.

Manny Ramos is a corps member in Report for America, a not-for-profit journalism program that aims to bolster Sun-Times coverage of issues affecting Chicago’s South and West sides.