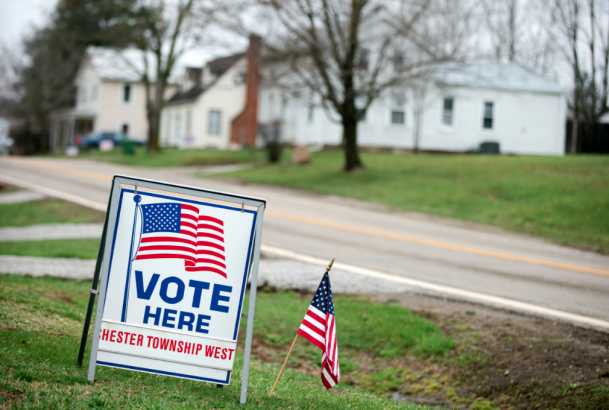 90 Percent Of Public Lacks Trust In US Political System

– Americans Express Frustration Regarding The 2016 Presidential Election And Find Both Parties Inflexible To New Ideas.

– Despite The Success Of Donald Trump And Bernie Sanders, Both Parties Are Seen As Resistant To New Ideas And Candidates From Outside The Party Organizations.

– Americans Show Little Confidence In The Branches Of The Federal Government, The Political System, And The Country’s Major Political Parties.

– There Is Public Confidence In The Accuracy Of Vote Counts But Strong Reservations About The Two-Party System And The Fairness Of The Nominating Process.

Seventy percent of Americans say they feel frustrated about this year’s presidential election, including roughly equal proportions of Democrats and Republicans, according to a recent national poll conducted by The Associated Press-NORC Center for Public Affairs Research. More than half feel helpless and a similar percent are angry.

Nine in 10 Americans lack confidence in the country’s political system, and among a normally polarized electorate, there are few partisan differences in the public’s lack of faith in the political parties, the nominating process, and the branches of government.

Americans do not see either the Republicans or the Democrats as particularly receptive to new ideas or the views of the rank-and-file membership. However, the candidacy of Bernie Sanders for the Democratic nomination is more likely to be viewed as good for his party than Donald Trump’s bid for the Republican Party.

The nationwide poll of 1,060 adults used the AmeriSpeak® Omnibus, a monthly multi-client survey using NORC at the University of Chicago’s probability based panel. Interviews were conducted between May 12 and 15, 2016, online and using landlines and cellphones.

Some of the poll’s key findings are:

Americans Express Frustration Regarding The 2016 Presidential Election And Find Both Parties Inflexible To New Ideas.

In general, the election is provoking more negative feelings than positive ones. Although two-thirds of Americans say they are interested in the 2016 presidential election, about 7 in 10 say they feel frustrated and more than half feel helpless or angry. Far fewer report they feel either hopeful, excited, or proud.

Currently the public is lukewarm about the inclusion of Democratic officeholders and party officials as superdelegates in the nominating process. The implementation of superdelegates in 1984 by the Democratic Party was an effort to merge the knowledge and experience of party insiders with the wishes of rank-and-file Democrats, and therefore, prevent the nomination of candidates with little chance of success.

Hillary Clinton has 1,768 pledged delegates, won through the primary and caucus process, 274 more than Sanders. But because she is supported by 525 superdelegates, Clinton needs 90 more delegates to clinch the nomination, while Sanders, who is only backed by 39 superdelegates, needs 847.  Superdelegates are free to change their support at any time before the convention. [1]

Despite The Success Of Donald Trump And Bernie Sanders, Both Parties Are Seen As Resistant To New Ideas And Candidates From Outside The Party Organizations.

Few Americans see either party as receptive to fresh ideas. Just 17 percent of the public say the Democratic Party is open to new ideas about dealing with the country’s problems; 10 percent report that about the Republican Party.

Additionally, most Americans say neither political party takes much notice of the views of ordinary voters. Fourteen percent say the Democratic Party is responsive to the opinions of the average voter; 8 percent say the same about the Republicans.

Americans view both parties as resistant to outside candidates that are independent from the Washington establishment and party politics. Seventeen percent consider the Democratic Party amenable to outsider candidates. Even fewer, only 9 percent, regard the Republican Party as willing to consider an independent candidate.

Although the public does not see the parties as being particularly receptive to candidates from outside the usual sphere of party influence, the nominating process on both sides of the aisle have major candidates that could be considered outsiders.

The presumptive Republican nominee has never held elected office, and Trump will be the first major party candidate for President to have never been elected to public office since Dwight D. Eisenhower was the Republican nominee in 1952 after serving as the Supreme Commander of the Allied Forces in Europe during World War II. And while Sanders was a member of the United States House of Representative for 16 years, and has represented Vermont in the United States Senate since 2006, he has served in Congress most years as an independent, albeit one that caucuses with the Democrats.

The public is more positive about Sanders’ campaign. About half of the public regards Sanders’ bid for the nomination as beneficial to the Democratic Party, while about 2 in 10 say it has had a negative effect. Democrats are more likely than Republicans or independents to say Sanders has been good for the Democratic Party (64 percent vs. 43 percent and 22 percent).

Americans Show Little Confidence In The Branches Of The Federal Government, The Political System, And The Country’s Major Political Parties.

And only 16 percent of Republicans have a great deal of confidence in the Republican Party compared to just 3 percent of Democrats or independents.

There Is Public Confidence In The Accuracy Of Vote Counts But Strong Reservations About The Two-Party System And The Fairness Of The Nominating Process.

Many Americans want changes to the process. Seven in 10 would prefer to see primaries and caucuses be open to all voters, regardless of the party registration. Only 3 in 10 favor a system of closed nominating contests, where only voters registered in a party can participate in that party’s primary or caucus. A majority of each party say they favor open primaries and caucuses, though Democrats are more likely than Republicans to support them (73 percent vs. 62 percent).

This survey was conducted by The Associated Press NORC Center for Public Affairs Research and with funding from NORC at the University of Chicago. Data were collected using AmeriSpeak Omnibus®, a monthly multi-client survey using NORC at the University of Chicago’s probability based panel designed to be representative of the U.S. household population. The survey was part of a larger study that included questions about other topics not included in this report. During the initial recruitment phase of the panel, randomly selected U.S. households were sampled with a known, non-zero probability of selection from the NORC National Sample Frame and then contacted by U.S. mail, email, telephone, and field interviewers (face to face).

Interviews for this survey were conducted between May 12 and 15, 2016, with adults age 18 and over representing the 50 states and the District of Columbia. Panel members were randomly drawn from AmeriSpeak, and 1,060 completed the survey—761 via the web and 299 via telephone. The final stage completion rate is 29.6 percent, the weighted household panel response rate is 23.8 percent, and the weighted household panel retention rate is 90.5 percent, for a cumulative response rate of 6.4 percent. The overall margin of sampling error is +/- 4.1 percentage points at the 95 percent confidence level, including the design effect. The margin of sampling error may be higher for subgroups.

Once the sample has been selected and fielded, and all the study data have been collected and made final, a poststratification process is used to adjust for any survey nonresponse as well as any non-coverage or under  and oversampling resulting from the study specific sample design. Poststratification variables included age, gender, census division, race/ethnicity, and household phone status. The weighted data, which reflect the U.S. population of adults age 18 and over, were used for all analyses.

All differences reported between subgroups of the U.S. population are at the 95 percent level of statistical significance, meaning that there is only a 5 percent (or lower) probability that the observed differences could be attributed to chance variation in sampling.

A comprehensive listing of the questions, complete with tabulations of top level results for each question, is available on The AP NORC Center website: www.apnorc.org.

From NORC at the University of Chicago

From The Associated Press

About The Associated Press-NORC Center for Public Affairs Research

The AP NORC Center for Public Affairs Research taps into the power of social science research and the highest quality journalism to bring key information to people across the nation and throughout the world.

The Associated Press (AP) is the world’s essential news organization, bringing fast, unbiased news to all media platforms and formats.

NORC at the University of Chicago is one of the oldest and most respected, independent research institutions in the world.

The two organizations have established The AP NORC Center for Public Affairs Research to conduct, analyze, and distribute social science research in the public interest on newsworthy topics, and to use the power of journalism to tell the stories that research reveals.