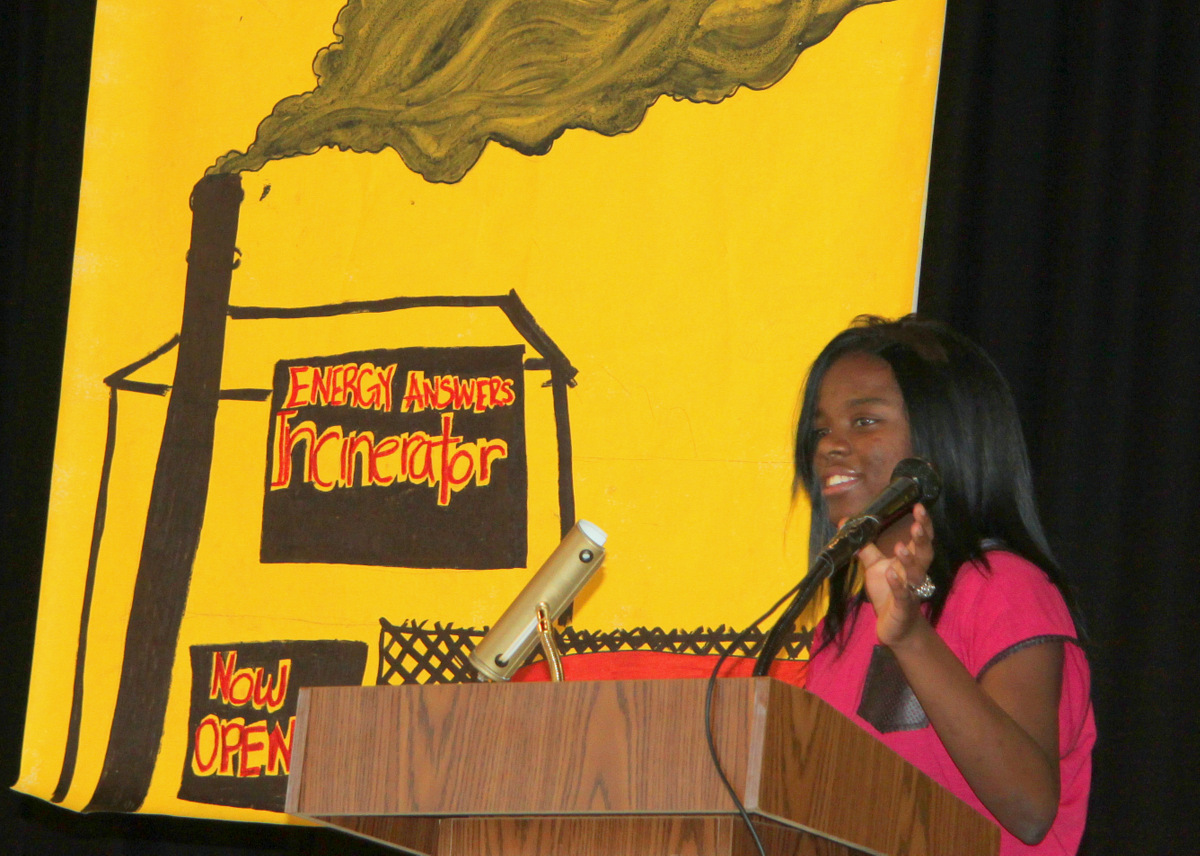 A crowd of some 150 students, neighbors, and activists files out of Benjamin Franklin High School and into Patapsco Avenue, the four-lane highway that cuts through Brooklyn and Curtis Bay, working-class neighborhoods on the south side of Baltimore. The street itself, flanked on one side by row homes and on the other by port cranes and a construction company warehouse, tells a story of unsustainable and inhumane development. The crowd strikes up chants: “Whose city? Our city!” and “What do we want? Fair development!” We’re passed by trucks heading to nearby industries as we march to the target of our protest, the proposed site of the new trash-burning incinerator that would be the second largest in the United States.

It’s not every day that Curtis Bay sees a protest like this. Although Curtis Bay is on the water, it couldn’t be further removed from the glitzy, city-funded Inner Harbor development a few miles to the north. Geographically isolated from central Baltimore, it’s often forgotten about by residents of the rest of the city. For years, industrial corporations and the city and state government have taken advantage of its isolation to locate polluting industries there: a coal terminal, a pesticide factory, a petroleum refinery, a medical waste incinerator. It’s no coincidence that the white, black and Latino residents of the neighborhood tend to be economically disadvantaged. A student speaker tells us that, although he has grown accustomed to the smell, the air pollution in the neighborhood has permanent effects on the well-being of the neighborhood: in one classroom student organizers visited, when they asked who in the class has asthma, everyone’s hand went up. The new incinerator, proposed by an Albany-based company ironically named Energy Answers, is simply the latest in this trend. It would burn up to 4,000 tons of trash per day—nearly twice the capacity of Baltimore’s already existing incinerator, and so much that trash would have to be imported from other states. As a march organizer tells us over the megaphone, this would result in yet more mercury, particulate matter, and greenhouse gases polluting the air in the neighborhood and the whole city. Yet, because the energy from the burning trash would be used to generate electricity, Energy Answers—as well as Maryland’s Democratic governor, Martin O’Malley—are promoting the incinerator as a “green” renewable energy project. Posters at the proposed incinerator site (the former pesticide factory) also proclaim that the project is “renewing Baltimore’s industrial base”, although there is no guarantee that the 150 or so permanent jobs at the incinerator will go to residents of Baltimore or even Maryland.

Most residents of Curtis Bay haven’t heard of the new incinerator. Energy Answers and the city and state governments have done little to raise awareness, even though the incinerator will be sited less than a mile from the high school and residents’ homes. Before the march, at the rally in the school’s auditorium, student speakers point out the injustice of a community being kept in the dark about decisions that will affect its future: “Fair development means putting people over profit. Fair development means the community gets a say in that happens here.” It’s this student leadership that has the potential to transform Curtis Bay from a neighborhood that gets dumped on to one that takes control of its own destiny. Previously, such hope was difficult to find. A few weeks before the march, activists went door-to-door to enlist neighborhood support. When informed about the incinerator, nearly all were against it. Some committed to attending the march. But others were discouraged. What’s the point? We can’t win. And the neighborhood is so polluted already—what difference will one more incinerator make? Curtis Bay residents have been accustomed to corporations and the state getting their way for a long time.

Previous efforts to oppose the incinerator have been unsuccessful. Nonprofits like Energy Action Coalition have mounted campaigns which succeeded in throwing up bureaucratic roadblocks that delayed the start of construction. But they were unable to stop the incinerator outright, due to the critical weakness of not being able to point to community backing. Of course, community members did oppose the incinerator. But there was no organized opposition: the local community association hasn’t opposed it. Worse, the Brooklyn and Curtis Bay Coalition (a non-profit “community development” association)brokered a deal with Energy Answers, supporting the plan in exchange for donations to a scholarship fund and local parks. Energy Answers was permitted to start construction in December 2012. Ultimately, a top-down NGO strategy wasn’t enough to build power to stop the incinerator.

The emergence of youth leadership against the incinerator began with the formation of a student social justice group at Ben Franklin High School called Free Your Voice. Supported by a staff organizer from a local grassroots-organizing nonprofit, United Workers, the students began meeting to discuss and research issues in the community for several months. Rather than pushing them to take a particular course of action, the organizer encouraged the students to take leadership and to choose what direction the group would go. Once they decided to focus on the incinerator, the students demonstrated themselves to be formidable organizers, creating an online petition and two videos, planning and securing student and teacher support for the demonstration. The galvanizing effect that the organizing has had on the students, creating a new sense of power and possibility, was palpable. One student organizer closed his speech at the rally with a quotation from Charlie Chaplin’s speech in The Great Dictator: “More than machinery we need humanity. More than cleverness we need kindness and gentleness. Without these qualities, life will be violent and all will be lost…” A poster created by students at Ben Franklin High School hangs on the auditorium wall during the anti-incinerator rally.

As an organizer seeking ways to connect the struggles of working-class and oppressed communities with the ecological struggle, the story of the Free Your Voice group had an obvious lesson for me. Through self-organization, members of these communities can draw these connections. Activists from outside the community should provide support, but allow time and space for local leadership to develop. Further, the protest and its demand for “fair development” raise important questions with implications that reach far beyond the fate of one neighborhood or city, questions such as: how should we dispose of our trash? Why does our society create so much trash in the first place? What will industry look like in a just society, and how will workers and communities plan it to be ecologically sound and socially just? These questions invite us to create radical visions of a new society and revolutionary ideas about what would be necessary to get us there. They are questions that this struggle shares in common with the political project I identify with, ecosocialism. It’s in struggles like this one that the true relevance of such radical questions—literally matters of life and death for individuals and communities—becomes clear.

At the close of the rally, demonstrators leave bright yellow flowers, representing the sun, in the chain-link fence surrounding the proposed incinerator site, to send a message to Energy Answers about what truly green development would look like. From their signs, chants, and banners, I believe that the student organizers in Curtis Bay are giving thought to these questions, crafting visions of how their community can take charge of the path of its own development, and I am optimistic that their struggle will only deepen as their radical vision develops. The growing struggle in Curtis Bay, and the change in consciousness that it is engendering, demonstrate why such struggles are critical to building an international movement to save our planet and its people from the toxic effects of capitalism.

Maryland residents: Please sign Free Your Voice Group’s online petition to Governor O’Malley calling on him to stop the incinerator.

Nick Davenport is an activist in Baltimore and a member of Solidarity and System Change Not Climate Change: The Ecosocialist Coalition.