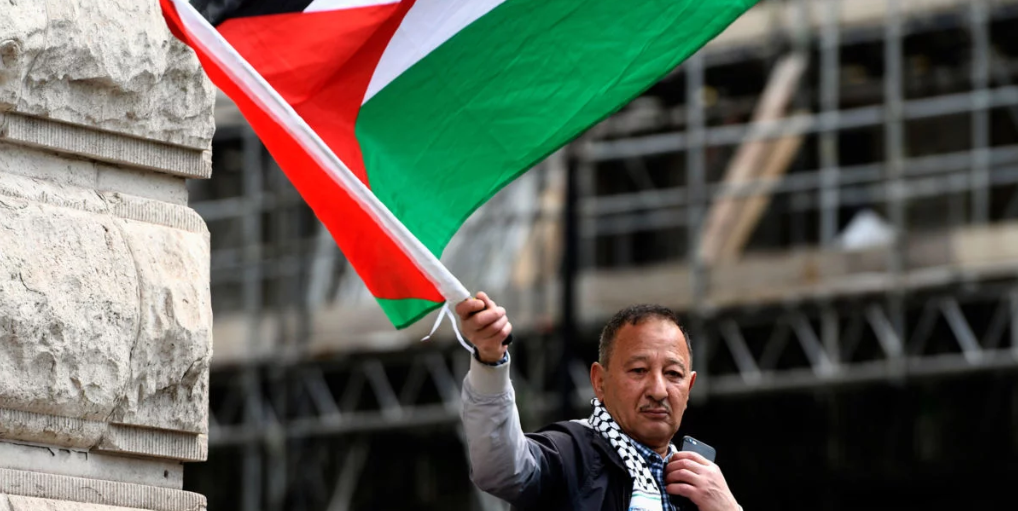 A BDS Campaign Tackles The Sports Industry In Portland — And Wins

Above Photo: A protester waves the Palestinian flag during a rally on May 11, 2019, in London, England. Grassroots pressure to support Palestinian rights is sweeping the globe. After a year-long protest campaign, the Portland Trail Blazers basketball team recently ended a corporate partnership with Leupold & Stevens, which makes rifle scopes for Israel’s army.ANDRES PANTOJA / SOPA IMAGES / LIGHTROCKET VIA GETTY IMAGES

Boycotting for Palestinian rights works. A reporter broke the news in late September that the Portland Trail Blazers basketball team ended their partnership with Leupold & Stevens, which makes rifle scopes for Israel’s brutal occupying army, following a year-long protest campaign led by our Portland, Oregon, chapter of the Democratic Socialists of America (DSA) and many allies.

For nearly 10 years, Leupold & Stevens sponsored a “Hometown Hero” segment during Blazers games, ostensibly to honor veterans and first responders but more obviously to market the company, with their crosshairs “L” logo lighting up the arena nightly. The same L logo sits atop the rifles of Israeli snipers who shot dead more than 200 Palestinian protesters who participated in the Great March of Return in Gaza since March 2018, and injured thousands more.

On October 10, as the team came under attack from right-wing outlets like Breitbart and the New York Post for bowing to pressure from the Palestinian-led Boycott, Divestment and Sanctions (BDS) movement, the Blazers felt they needed to claim publicly that Leupold & Stevens made the decision for “business-related” reasons, and were “not influenced by external pressure.” Many businesses don’t want to admit to acting under pressure to address human rights concerns. Most famously, when Citibank, the final U.S. bank operating in apartheid South Africa, withdrew in 1987, it cited a “business decision” and denied being swayed by protests.

We’ll probably never be able to prove who suddenly ended this Portland partnership or why. But for us, what matters is that it ended after we made a public demand to respect Palestinian human rights and amid controversy surrounding the partnership specifically because Leupold supplies scopes to Israel’s army. What matters even more is that we educated thousands, shaped the narrative and shifted public opinion — goals central to the BDS movement.

When we began this campaign, only 30 people came to our press conference. But our point wasn’t to intimidate or even protest. It was to educate through real conversations with people who were open to hearing about social justice causes but likely didn’t know much about Israel and Palestine. We succeeded.

Though the Blazers organization refused to meet with us, we heard from hundreds of fans — diehard fans, fans with box seats and fans with season tickets. Sports reporters covered the controversy. Veterans and first responders, the people who the partnership purported to honor, told us they were upset with how their experiences were exploited to promote this company. A player even approached the Blazers privately to express his distaste.

But we really got our message out when Marine veteran Josuee Hernandez, a “Hometown Hero” nominee, used the ceremony to protest. He wore a shirt that said: “End This Sponsorship #NoLeupold,” took a knee and refused the goodie bag emblazoned with the Leupold L crosshairs. The entire world saw Hernandez’s protest on camera.

Our campaign supports Palestinian civil society’s BDS movement. BDS aims to exert nonviolent pressure on Israel until it complies with international law and respects Palestinians’ fundamental rights by ending Israel’s military occupation of the West Bank and Gaza Strip, its systematic discrimination against Israel’s Palestinian citizens and its denial of Palestinian refugees’ right of return.

As socialists, we must side with the oppressed and demand their unconditional liberation, and we recognize that Palestine serves as a window into U.S. empire as a whole. As Daniel Denvir of “The Dig” recently articulated: “You can trace the fault lines of mainstream politics by identifying where people stand on Palestine…. ‘Progressive except for Palestine’ is a bit of a misnomer: because any politician who supports Israeli settler-colonialism likewise supports Empire as a whole — If Palestine is an exception then it is one that proves the rule.”

Since its founding in 2005, BDS has grown rapidly from a little-known acronym to a global movement, despite the passage of laws penalizing BDS supporters and attempts to blacklist them. DSA provides an example of how BDS is catching on among progressive, anti-racist groups. In 2017, we endorsed BDS at our national convention and began local campaigns. We then moved to begin national BDS organizing after our 2019 national convention.

Worldwide, musicians, athletes and grassroots organizations like ours have participated in BDS campaigns. Now, presidential candidates are talking about cutting aid to Israel, and celebrities have canceled or apologized for trips to Israel.

We’re often told by naysayers and conservative or apolitical sports fans or commentators to “leave politics out of sports.” We say: you first. Leupold spent hundreds of thousands of dollars to promote scopes that have been used for war crimes. Israel pays for U.S. players and teams to travel there on propaganda trips. The Israel Football Association includes in its official leagues teams based in illegal Israeli settlements on stolen Palestinian land in the occupied West Bank, and Israel prevents Palestinian players from traveling to their games. All we’ve done is ask them to stop.

As long as sport is used to help prop up Israel’s oppression of Palestinians, and BDS continues to spread, we should expect more sports-related BDS campaigns. Supporters of human rights called on Argentina and Uruguay’s national soccer teams to cancel a November “friendly” match in Tel Aviv. There’s currently a global campaign for Puma to end its sponsorship of the Israel Football Association. FIFA has been asked to suspend the Israel Football Association’s membership over Israel’s teams based in illegal settlements.

We in Portland will continue campaigning for the Blazers not to play games with Israeli teams. We can also expect to see more sports campaign victories, but don’t be surprised when the teams and companies involved again claim the campaigns didn’t influence their decisions.