Above Photo: A rendering of the Detroit People’s Food Co-op at its planned location on Woodward Avenue. Russell Baltimore

The Detroit People’s Food Co-op will control food production and dissemination to bring good food and wages to an underserved community.

He viewed controlling food retail and production as important aspects of black self-determination, echoing the sentiments of organizations like the Nation of Islam and Detroit’s Shrine of the Black MadonnaChurch that emphasized owning farmland and running food businesses. Healthy food was important to Yakini, but so was making sure “the majority of people had their needs met as opposed to a system that concentrates wealth in the hands of a few.”

Now, after years of teaching and serving as a principal in Detroit schools, helping lead the Detroit Black Community Food Security Network (DBCFSN) and starting D Town Farm on the city’s west side, Yakini and DBCFSN are planning a 34,000-square-foot food co-op, event space, and commercial kitchens in Detroit’s North End neighborhood. The project could serve as a proof-of-concept for the ability of co-ops to build wealth, create food security, and drive investment in underserved communities. 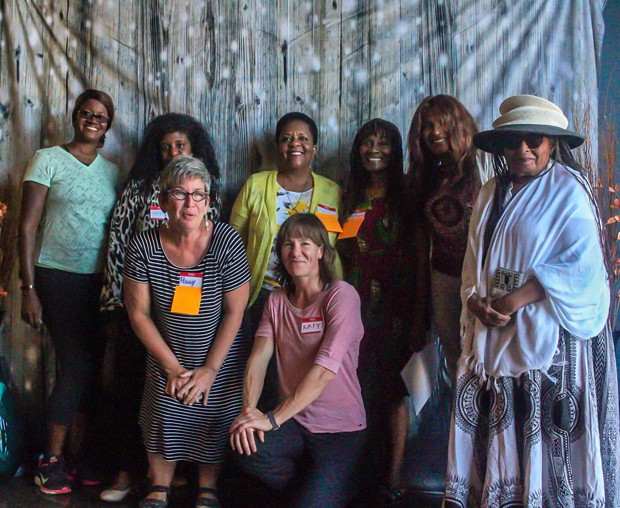 Some of the core members working on the Detroit People’s Food Co-op. (Denerio Watkins)

The project, which is called the Detroit Food Commons and contains the Detroit People’s Food Co-op, builds on a tradition of African-American business cooperatives that were championed by the likes of W.E.B. Dubois as tools for building economic and ultimately political power. Following slavery, African Americans formed co-ops for things like credit and farming to survive under a segregated and exploitative system. Unlike other businesses, co-ops are jointly owned enterprises, focused more on meeting collective needs than turning profits, although profit or “surplus” as it’s sometimes called is necessary to exist in a capitalist system. At the Detroit People’s Food Co-op, each owner will get one vote, creating equality between owners, at least in theory.

As well as delivering the benefits of a democratically-governed institution that sells healthy food, the Detroit co-op plans to create 20 to 40 jobs, provide opportunities for local entrepreneurs and stimulate other aspects of the local economy, like urban farms. It is part of a wave of similar projects in cities such as Flint, Michigan, and Dayton, Ohio, that have received support from charitable foundations. The Michigan Good Food Fund is helping this project, which is a partnership among Capital Impact Partners, the Fair Food Network, Michigan State’s Center for Regional Food Systems and the W.K. Kellogg Foundation. This fund has invested over $12 million in food-based projects in the state, as well as providing technical assistance, and sees food co-ops as an especially effective way to build wealth in communities facing redlining and systematic disinvestment.“We prioritize our work with food cooperatives because we feel that the model allows for the creation of quality jobs and these jobs have low barriers to entry, especially within the food economy,” Olivia Rebanal from Capital Impact Partners said. “It creates employment opportunities for those that are most difficult to employ … We also see the cooperative model as a catalyst for community development. They empower leaders. They provide more equitable access to services like Malik’s project would do. They are more likely than non-cooperatives to recirculate local profits back into the community.”

The Detroit co-op would also employ black people in management positions—jobs that they have often been denied in Detroit grocery stores according to Yakini—helping build capacity for this kind of leadership. 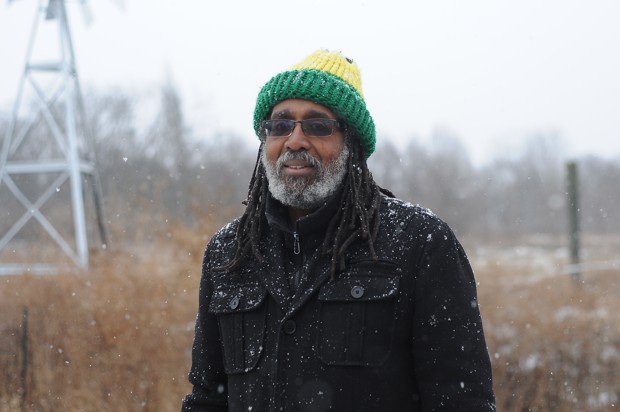 However, food co-ops and similar businesses still have to contend with the same challenges faced by other African-American businesses to obtain financing. “The exclusion of certain groups from accessing credit is no mistake,” Rebanal says. Some have understandably questioned the ability of co-ops to reverse the growing wealth gap between black and Latinx households and white ones. Rebanal says she believes it will take a while to reverse this trend and the onus needs to be on lenders as well as communities to create change. But she thinks her organization can help by both providing investment and technical assistance. Cooperative ownership itself also helps with financing—the cost to join the Detroit co-op is $200, although there is a matching fund for a number of low-income people to buy-in with just $100.

Additionally, the Detroit Food Commons possesses what Jean Chorazyczewski, a program director for the Fair Food Network, terms an “ambitious vision” that makes it appealing to foundations looking to drive change and could help it succeed at a time when other co-ops are struggling. Today, many are based on a model that was established in the 60s and 70s in which co-ops found a competitive advantage offering healthy, organic food. During the last few years, large grocery stores have moved into the organic sector, offering competitive prices and cutting into co-op profits, causing some long-established enterprises to close. One pitfall the Detroit People’s Food Co-op wants to avoid is the practice of giving discounts to members at the register, something Yakini says, “(is) giving away profit before you know if the store is profitable.” Instead, member-owners will receive periodic discounts and an equity-share at the end of the year.

To remain competitive, co-ops have had to re-evaluate how they attract customers. The Detroit Food Commons hopes to establish itself as a destination for “hyper-local” produce and offerings from local food businesses, as well as hosting events. It also plans to draw income from its commercial kitchens. The co-op’s position near a major freeway and directly on Woodward Avenue—a major road that connects downtown Detroit with the wealthy suburbs of Oakland County— might also help. It could benefit from the boom in Detroit’s downtown and Cass Corridor neighborhoods while also serving residents of the predominantly black areas of the city outside downtown. 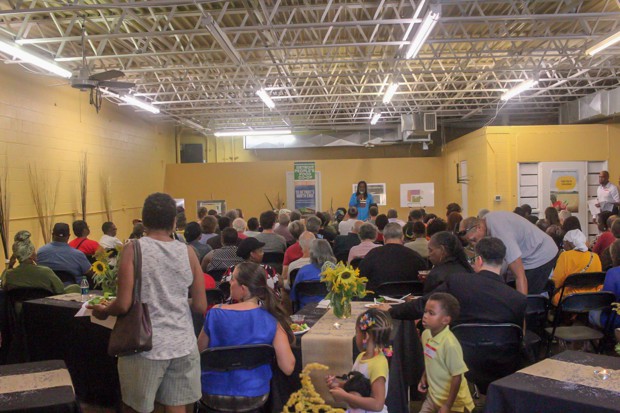 “One of the challenges we’re faced with is that the neighborhood is changing,” Yakini says. “And co-ops, no matter how thoughtful we are, help to spur gentrification. And so, we’re thinking about ways that we can circulate wealth within the existing community.” They’re also trying to make themselves more accessible to historical residents by rewriting some of the rules of the co-op playbook, offering what they call “clean conventional” products, which will make up 25 percent of the store. They’re coming up with their own standards for these more affordable foods that will exclude ingredients like BHT and artificial colors, while also accounting for other things like labor practices.

Outreach is also a top priority. Yakini has been in contact with a number of co-ops across the country including the Renaissance Community Co-op in Greensboro, North Carolina, which initially had trouble attracting shoppers because residents had become so accustomed to leaving the neighborhood to buy groceries. Those that Yakini spoke with at Renaissance and elsewhere also stressed the importance of hiring a competent general manager. “Food retail is not easy,” Rebanal says. “The margins are low, the waste is high, you need to turn volume. It does take an expert to be able to navigate towards success.”The terminology itself presents another obstacle. “I know that for some co-ops in primarily black communities, the word ‘co-op’ is even exclusive,” Rebanal says. For its part, the Detroit co-op is trying to recruit 1,000 members before a prospective late 2020 opening, which will help with both outreach and opening costs. So far, it has signed up 271 members.

Although connecting with black Detroiters is a priority, Yakini makes clear that the goal is to create a welcoming environment. “That’s kind of a delicate balance that we’re walking because we definitely believe in black self-determination and black leadership and this is black-led … And the white people who are working with us—I think for the most part—have an awareness of the racial dynamic and the need for black leadership, and are trying to function in a way that helps promote that. But we don’t want to frame it in such a way that everybody doesn’t feel welcome to shop there.”

After ten years of work, Yakini and the various co-op steering committees are still deep in the planning process for the store, doing things like “detail/retail” planning to project the income from various store departments, and deciding how much space to devote to each one. They’re also working on the building’s construction in partnership with the non-profit Develop Detroit—which is also building housing in conjunction with the project—and that work is all contingent on permitting and the often unpredictable machinations of city governmentAt the end of this grueling process, Yakini hopes to have created not only a community hub for food and education in Detroit, but a replicable model for communities elsewhere, that among other things “causes funders to be more thoughtful about how funding and finance is deployed in majority black urban areas.”

Rebanal believes this is already happening, noting a dozen other projects that have been inspired by Malik’s mentorship. Although the circumstances in Detroit are unique, this project is still expected to change the conversation around cooperative enterprise. “We think the model is aspirational,” Rebanal says, “and we see it happening in many other communities.”