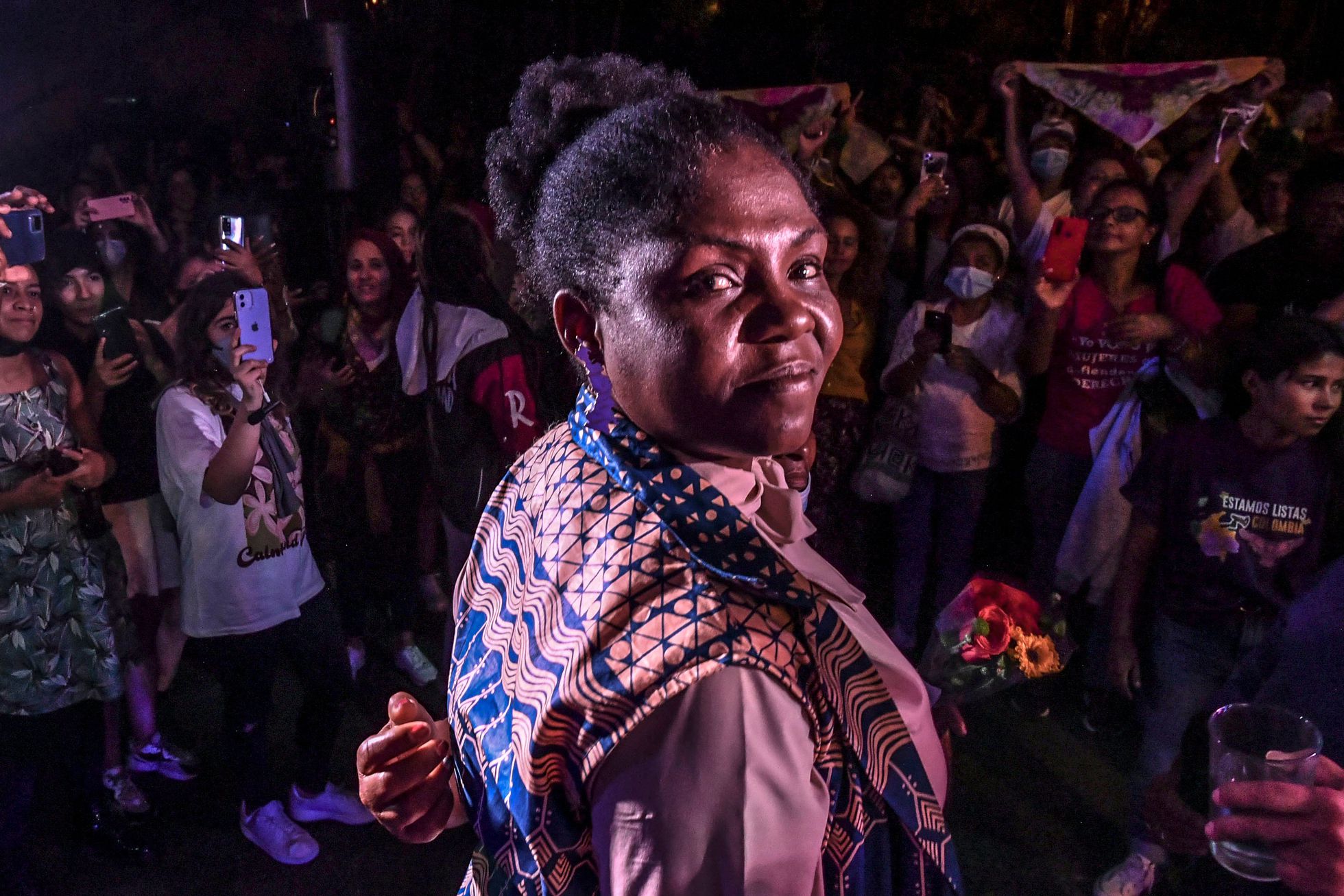 Soy Porque Somos (I Am Because We Are).

This article was written before the March 13 primaries when Francia Marquez received more than 780,000 votes. She received more votes than any Black politician in Colombian history. Would her outstanding performance, surpassing even candidates from right-wing parties, be enough to secure her the nomination to run as vice-president candidate in the frontrunner party Pacto Historico?

Francia Márquez Mina, a 40-year-old Black female activist from the predominantly Black and forgotten region of the Colombian Pacific coast, is shifting the terms of political debate in the second ‘Blackest’ nation in South America. Francia, the first Black woman to run for the Colombian presidency, is leading a collective effort by women, LGBTQ+ communities, Black youth, peasants, and the poor in general to transform Colombia’s insidious patterns of violence and socio-racial inequalities. According to  Infobae , as many as 54.2% of Colombia’s population face food insecurity, 42% are under the poverty line, and 10.8% of children are under chronic malnutrition. The country has one of the largest internally-displaced populations and the longest armed conflict in the hemisphere. Racism is at the core of these dynamics of violence as the predominantly Black Pacific coast, and indigenous territories of the Andean and Caribbean regions, bear the brunt of these inequalities and victimizations. “This is a nation that has been governed as a hacienda by the same elite. Now it is time to occupy the Casa de Nariño, the master’s house!” says Francia, referring to the Colombian presidential palace in Bogotá.

This black woman’s presence in the electoral race stands in sharp contrast to the familiar faces of the owners of power in her country. She is definitely “out of place” in a society where the expectation is Black women performing domestic work in the kitchen of white/mestizo elites who are her political opponents. This Colombian racial imagery has been openly vocalized, for example, by Spanish magazine Hola . An infamous special issue praised Colombian socialite Sonia Zarzur (from a traditional agribusiness family) with two Black maids standing in uniform in the background. Despite the public outcry, this is indeed the socially shared imaginary of Black women’s place in Colombian society since the abolition of slavery in 1851. Having survived assassination attempts and being displaced from her own community by land-grabbing and paramilitary-linked groups in the war-torn Cauca region, Francia does not have doubts about the antiblack animus that governs the nation and the current presidential campaign. “We are tired of sembrar nuestros muertos (burying our dead). That is why I decided to say yes to this challenge,” says Francia.

Black people occupying the house of the founding fathers (Casa de Nariño) is a nightmare from the perspective of the war-lords, whose political advancements rely on Black evisceration. It is also a hard-to-digest idea to progressive forces that, while relatively open to ‘accept’ minorities in politics as a sign of democracy’s maturity, block the ways for Black women’s advancement. Consider, for instance, how gendered antiblackness has pervaded party politics and mainstream media’s coverage of the election. Commentators have disqualified Marquez as an “inexperienced and outsider.” She has also been portrayed as “nobody,” someone from the mass of invisible ordinary people that, as Black activists Lina Lucumí and Lizeth Ossa forcefully denounce, “have scars in their bodies and souls.”  Interestingly enough, even when the media mobilize gender in an effort to recognize the legitimate claims of a former female senator and war victim to participate in the male-dominated race, Francia’s own life,  intersected by the cruelties of war as well as her internationally recognized efforts as an environmentalist and peacemaker, does not generate similar recognition. As the holder of the Goldman Environmental Prize, Francia is a global authority on the pressing problem of climate change and alternative economic justice.

Still, the establishment seems more prone to embracing an all-inclusive white/mestizo icon of a national tragedy at the expense of invisibilizing multiple indignities ordinarily experienced by those whose gender, race, sexual orientation, and region of origin place them outside the imaginary of victimhood and the promises of Colombian democracy. As Francia would ask, can poor people’s fate become the common ground to celebrate a social pact that may “give birth to a democracy that dignifies life?”

The question is also relevant to shed light on Pacto Histórico ‘s anti-Blackness. Pacto Histórico – the ample arch of alliance formed by political parties and social movements to defeat traditional power-holders – has important homework before accomplishing its promise of being a progressive political force in May’s election. Perhaps not surprising to those attentive to Colombia’s racial history, disturbing demonstrations of anti-Black racism abound in the form of micro/macro-aggressions endured by members of the SoyPorqueSomos (I am Because We Are) movement. For instance, candidates under the Black-centered initiative were practically excluded from the closed-list voting system of nominations to the Senate and House of Representatives. Vicenta Moreno and Carlos Rosero – two social activists who have labored their whole life to advance democracy in the country – were promised a position in the congressional list on the grounds of racial and gender reparations. In the end, however, they were replaced by white/mestizo center and leftist politicians who cannibalized the discourse of inclusion. The Pacto had to compromise. Black leaders were sacrificed (sent to the end of the list) to save the coalition. Then, the national electoral board has been denounced for restricting Marquez’s campaign access to public funds amply available to other candidates. Finally, although the block’s primaries on March 13 would nominate presidential and vice-presidential candidates for national elections according to their voting performance within the “Pacto Histórico,” some have sent conflicting messages about a possible trading-off (with the same old-white-men) in which Marquez would be asked, once again, to show “historical responsibility.”

We want to believe SoyPorqueSomos will not be sacrificed at the altar of traditional politics. No doubt, Presidential front-runner Gustavo Petro – and his Colombia Humana – is a progressive political project against uribismo and its tentacles in the state apparatus. Still, without Black women’s leadership, a new project is likely to become the repetition of “elites criollas” tragic progressivism that has marked the country and Latin America’s exclusionary projects of emancipation since 19th-century independence movements. Perhaps rightfully pessimist with electoral democracy, Afro-Brazilian philosopher Sueli Carneiro has contended that “between right and left, I am Black.” Now, to prove Carneiro’s statement wrong in the Colombian context, the Pacto Histórico must disinvest itself from its addiction to racism, and recognize and accept Black women’s leadership. In Francia’s terms, “I am not here to carry Petro’s bag. I am not here to perform this job. I am here to lead the transformation toward a new Colombia.”

In a campaign rally at the San Francisco Plaza in Cali, la capital de la resistencia, Francia outlined the multi-faceted program to “decolonize,” “depatriarcalize,” and demilitarize Colombia: gender and sexual justice, a social pact for peace, dismantling paramilitarism and restructuring the police, land distribution, sustainable economy of zero growth, the right to the city, the democratization of education, a new drug policy to stop the war on Black youth and Black territories, and a legal provision to protect rivers, forests, and all earth beings. SoyPorqueSomos proposes a Black-centered peace project to the war-making economy of the traditional white/mestizo elite. The country with a US-supported expansive military apparatus that is consistently deployed against Black territories abroad and at home (the assassination of Haitian president Jovenel Moïse by former Pentagon-trained Colombian mercenaries, and  the enduring anti-drug war waged against Black and Indigenous territories, with US taxpayer’s money under Plan Colombia , have deadly racial affinities) may now be the birthplace of a long-forged life-based and Black women-led project to overcome white destruction in the region.

Attentive to the radical tradition of Black liberation (el palenquismo) as a praxis for local and planetary liberation, Francia has promised to shift Colombia’s geopower from war-hungry to life-promoting regional leadership. These intersectional and supranational ethics of life provide blueprints for overcoming the current devastation of white-led war-capitalism. In Colombia, it is a choice between Black visions for a new nation and the persistence of white destruction. Nothing less than that!