A Century Of U.S. Intervention Created The Immigration Crisis

Above Photo: The 1823 Monroe Doctrine set the stage for U.S. intervention throughout Latin America. Photo by Michael Nicholson/Corbis via Getty

A national spotlight now shines on the border between the United States and Mexico, where heartbreaking images of Central American children being separated from their parents and held in cages demonstrate the consequences of the Trump administration’s “zero-tolerance policy” on unauthorized entry into the country, announced in May 2018. Under intense international scrutiny, Trump has now signed an executive order that will keep families detained at the border together, though it is unclear when the more than 2,300 children already separated from their guardians will be returned.

Trump has promised that keeping families together will not prevent his administration from maintaining “strong — very strong — borders,” making it abundantly clear that the crisis of mass detention and deportation at the border and throughout the U.S. is far from over. Meanwhile, Democratic rhetoric of inclusion, integration, and opportunity has failed to fundamentally question the logic of Republican calls for a strong border and the nation’s right to protect its sovereignty.

At the margins of the mainstream discursive stalemate over immigration lies over a century of historical U.S. intervention that politicians and pundits on both sides of the aisle seem determined to silence. Since Theodore Roosevelt in 1904 declared the U.S.’s right to exercise an “international police power” in Latin America, the U.S. has cut deep wounds throughout the region, leaving scars that will last for generations to come. This history of intervention is inextricable from the contemporary Central American crisis of internal and international displacement and migration.

The liberal rhetoric of inclusion and common humanity is insufficient: we must also acknowledge the role that a century of U.S.-backed military coups, corporate plundering, and neoliberal sapping of resources has played in the poverty, instability, and violence that now drives people from Guatemala, El Salvador, and Honduras toward Mexico and the United States. For decades, U.S. policies of military intervention and economic neoliberalism have undermined democracy and stability in the region, creating vacuums of power in which drug cartels and paramilitary alliances have risen. In the past fifteen years alone, CAFTA-DR — a free trade agreement between the U.S. and five Central American countries as well as the Dominican Republic — has restructured the region’s economy and guaranteed economic dependence on the United States through massive trade imbalances and the influx of American agricultural and industrial goods that weaken domestic industries. Yet there are few connections being drawn between the weakening of Central American rural agricultural economies at the hands of CAFTA and the rise in migration from the region in the years since. In general, the U.S. takes no responsibility for the conditions that drive Central American migrants to the border.

U.S. empire thrives on amnesia. The Trump administration cannot remember what it said last week, let alone the actions of presidential administrations long gone that sowed the seeds of today’s immigration crisis. There can be no common-sense immigration “debate” that conveniently ignores the history of U.S. intervention in Central America. Insisting on American values of inclusion and integration only bolsters the very myth of American exceptionalism, a narrative that has erased this nation’s imperial pursuits for over a century.

As the British immigrant rights refrain goes, “We are here because you were there.” The adage holds no less true here and now. It’s time to insist that accepting Central American refugees is not just a matter of morality or American benevolence. Indeed, it might be better described as a matter of reparations.

The following timeline compiles numerous sources to lay out an incomplete history of U.S. military and economic intervention in El Salvador, Honduras, and Guatemala over the past century. 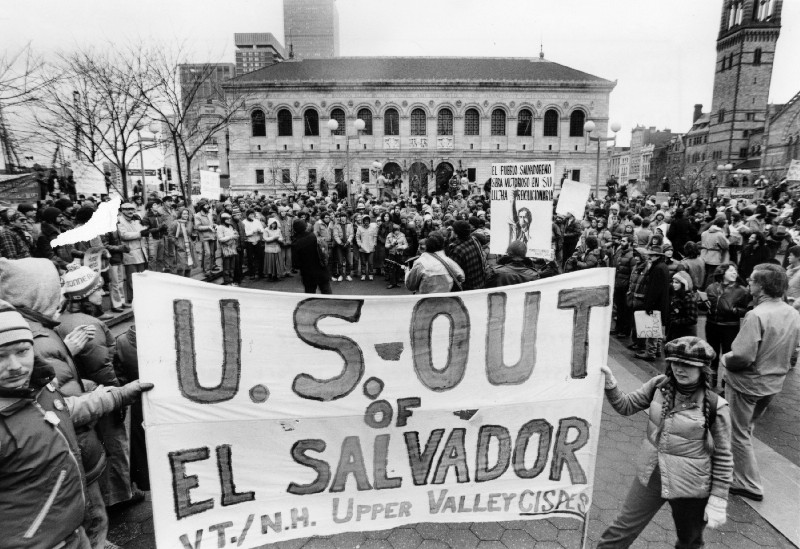 Anti-war marchers at Copley Square on their way to Boston Common to protest U.S. military involvement in El Salvador, on March 21, 1981. Photo by John Tlumacki/The Boston Globe via Getty

1932: A peasant rebellion, led by Communist leader Farabundo Martí, challenges the authority of the government. 10,000 to 40,000 communist rebels, many indigenous, are systematically murdered by the regime of military leader Maximiliano Hernández Martínez, the nation’s acting president. The United States and Great Britain, having bankrolled the nation’s economy and owning the majority of its export-oriented coffee plantations and railways, send naval support to quell the rebellion.

1944: Martínez is ousted by a bloodless popular revolution led by students. Within months, his party is reinstalled by a reactionary coup led by his former chief of police, Osmín Aguirre y Salinas, whose regime is legitimized by immediate recognition from the United States.

1960: A military-civilian junta promises free elections. President Eisenhower withholds recognition, fearing a leftist turn. The promise of democracy is broken when a right-wing countercoup seizes power months later. Dr. Fabio Castillo, a former president of the national university, would tell Congress that this coup was openly facilitated by the United States and that the U.S. had opposed the holding of free elections.

1980–1992: A civil war rages between the military-led government and the leftist Farabundo Martí National Liberation Front (FMLN). The Reagan administration, under its Cold War containment policy, offers significant military assistance to the authoritarian government, essentially running the war by 1983. The U.S. military trains key components of the Salvadoran forces, including the Atlacatl Battalion, the “pride of the United States military team in San Salvador.” The Atlacatl Battalion would go on to commit a civilian massacre in the village of El Mozote in 1981, killing at least 733 and as many as 1,000 unarmed civilians, including women and children. An estimated 80,000 are killed during the war, with the U.N. estimating that 85 percent of civilian deaths were committed by the Salvadoran military and death squads.

1984: Despite the raging civil war funded by the Reagan administration, a mere three percent of Salvadoran and Guatemalan asylum cases in the U.S. are approved, as Reagan officials deny allegations of human rights violations in El Salvador and Guatemala and designate asylum seekers as “economic migrants.” A religious sanctuary movement in the United States defies the government by publicly sponsoring and sheltering asylum seekers. Meanwhile, the U.S. funnels $1.4 million to its favored political parties in El Salvador’s 1984 election.

2014: The U.S. threatens to withhold almost $300 million worth of Millennium Challenge Corporation (MCC) development aid unless El Salvador ends any preferences for locally sourced corn and bean seeds under its Family Agriculture Plan.

2015: Under the tariff reduction model of CAFTA-DR, all U.S. industrial and commercial goods enter El Salvador duty free, creating impossible conditions for domestic industry to compete. As of 2016, the country had a negative trade balance of $4.18 billion.

The Impact of CAFTA: Drugs, Gangs, and Immigration
On , 2006 the U.S.-Central America Free Trade Agreement (CAFTA) went into effect between the United States and El…www.telesurtv.net
America’s Role in El Salvador’s Deterioration
It was a civil war of the 1980s, one that pitted leftist revolutionaries against the alliance of countries, oligarchs…www.theatlantic.com
How US ‘Free Trade’ Policies Created the Central American Migration Crisis
When tens of thousands of Central American migrant children streamed across the US-Mexico border last year, some in…www.thenation.com
Time for a US Apology to El Salvador
Over the ages, the United States has routinely intervened in Latin America, overthrowing left-wing governments and…www.thenation.com

1912: Bonilla rewards his corporate U.S. backers with concessions that grant natural resources and tax incentives to American companies, including Vaccaro Bros. and Co. (now Dole Food Company) and United Fruit Company (now Chiquita Brands International). By 1914, U.S. banana interests would come to own one million acres of the nation’s best land — an ownership frequently insured through the deployment of U.S. military forces.

1975: The United Fruit Company ( rebranded as the United Brands Company) pays $1.25 million to a Honduran official, and is accused of bribing the government to support a reduction in banana export taxes.

1980s: In an attempt to curtail the influence of left-wing movements in Central America, the Reagan administration stations thousands of troops in Honduras to train Contra right-wing rebels in their guerrilla war against Nicaragua’s Sandinistas. U.S. military aid reaches $77.5 million in 1984. Meanwhile, trade liberalization policies open Honduras to the interests of global capital and disrupt traditional forms of agriculture.

2005: Honduras becomes the second country to enter CAFTA, the free trade agreement with the U.S., leading to protests from unions and local farmers who fear being outcompeted by large-scale American producers. Rapidly, Honduras goes from being a net agricultural exporter to a net importer, leading to loss of jobs for small-scale farmers and increased rural migration.

2009: Left-leaning and democratically elected President Manuel Zelaya, who pursued progressive policies such as raising the minimum wage and subsidizing public transportation, is exiled in a military coup. The coup is staged after Zelaya announces intentions to hold a referendum on the replacement of the 1982 constitution, which had been written during the end of the reign of U.S.-backed military dictator Policarpo Paz García. Honduran General Romeo Vásquez Velásquez, a graduate of the U.S. Army training program known as the School of the Americas (nicknamed “School of Assassins”), leads the coup. The United States, under Hillary Clinton’s Department of State, refuses to join international calls for the “immediate and unconditional return” of Zelaya.

2017: Honduras enters an electoral crisis as thousands of protesters contestthe results of the recent presidential election, which many allege was rigged by the ruling party.

The U.S. Role In The Honduras Coup And Subsequent Violence
This past March, Berta Cáceres, a brave and outspoken indigenous Honduran environmental activist and winner of the…www.huffingtonpost.com
How US policy in Honduras set the stage for today’s mass migration
Central American migrants – particularly unaccompanied minors – are again crossing the U.S.-Mexico boundary in large…theconversation.com

1947: President Juan José Arévalo’s self-proclaimed “worker’s government” enacts labor codes that give Guatemalan workers the right to unionize and demand pay raises for the first time. The United Fruit Company, as the largest employer and landowner in the country, lobbies the U.S. government for intervention.

1954: Fearing the Guatemalan government’s steps toward agrarian reform and under the influence of United Fruit propagandist Edward Bernays, President Eisenhower authorizes the CIA to overthrow democratically elected President Jacobo Árbenz, ending an unprecedented ten years of democratic rule in the country, colloquially known as the “ten years of spring.” In Árbenz’s place, the U.S. installs Carlos Castillo Armas, whose authoritarian government rolls back land reforms and cracks down on peasant and workers’ movements.

1965: The CIA issues Green Berets and other counterinsurgency advisors to aid the authoritarian government in its repression of left-wing movements recruiting peasants in the name of “struggle against the government and the landowners.” State Department counterinsurgency advisor Charles Maechling Jr. would later describe the U.S.’s “direct complicity” in Guatemalan war crimes, which he compared to the “methods of Heinrich Himmler’s extermination squads.”

1971: Amnesty International finds that 7,000 civilian dissidents have been “disappeared” under the government of U.S.-backed Carlos Arana, nicknamed “the butcher of Zacapa” for his brutality.

1981: The Guatemalan Army launches “Operation Ceniza” in response to a growing Marxist guerrilla movement. In the name of “counterattacks” and “retaliations” against guerrilla activities, entire villages are bombed and looted, and their residents executed, using high-grade military equipment received from the United States. The Reagan administration approves a $2 billion covert CIA program in Guatemala on top of the shipment of $19.5 million worth of military helicopters and $3.2 million worth of military jeeps and trucks to the Guatemalan army. By the mid-1980s, 150,000 civilians are killed in the war, with 250,000 refugees fleeing to Mexico. Military leaders and government officials would later be tried for the genocide of the Maya victims of military massacres.

1982: A second U.S.-backed military coup installs Efraín Ríos Montt as president. Montt is convicted of genocide in 2013 for trying to exterminate the indigenous Maya Ixil.

The devastating effects of American intervention in Guatemala
In 1954, a CIA-orchestrated coup d’etat put an end to the first ten years of democratically elected government…thepanoptic.co.uk
Guatemala is the Future: Neoliberal Democracy and Authoritarian Populism
For decades the US was held up as Guatemala’s future. In this article, I argue that Guatemala’s experience with…www.counterpunch.org