A Cold War Power Play At The Inter-American Development Bank

The election of former Trump advisor Mauricio Claver-Carone as president of the Inter-American Development Bank is a sign of the Trump administration’s intent to turn Latin America into an unwilling partner in the New Cold War on China.

Having launched his presidential campaign by labeling migrants from south of the U.S.-Mexico border as “rapists and criminals,” Latin America was perhaps one of the last places President Donald Trump expected to rely on as a source of steadfast friends. It thus comes as no surprise that in the new Cold War against China, Trump’s tactics in recruiting allies in Latin America have been reminiscent of the many “caudillos” that have plagued the continent in the past. The politicized impeachment of Dilma Roussef, deposing of Evo Morales, and attempted invasion of Venezuela set the backdrop to U.S. efforts to bring Latin America under U.S. influence by force.

Founded in 1959, the Inter-American Development Bank (IDB) has grown to 48 member states primarily concentrated in South America and the Caribbean. Like the IMF and World Bank, IDB’s ostensible aim is to facilitate loans for infrastructure and economic development projects, often with severe austerity provisions attached.

Despite being based in Washington D.C. and with 30% shares giving the U.S. supreme decision-making authority over the institution, the U.S. has always strategically ensured that the president of the bank is a citizen of a Latin American country.

After over half a century of abiding by this unwritten rule, maintaining the veneer of IDB independence from Washington interests has officially fallen to the wayside with the selection of Miami-born Mauricio Claver-Carone to head the bank. It is one of many examples of the Trump Administration’s uncouth approach to ensuring U.S. supremacy in international relations.

Attorney Mauricio Claver-Carone originally caught the attention of the Trump administration with his hardline anti-Communist beliefs and his staunch opposition to the Obama administration’s normalization of relations with Cuba. Eager to expunge Obama’s legislative legacy, Mauricio became a top advisor and architect of Trump’s re-imposition of sanctions on Cuba in 2016.

Taking a hardline stance on Cuba remains a priority, but it is understood that Mauricio Claver-Carone’s wish to lead the IDB stem from much bigger ambitions—an agenda that finds itself conveniently congruent with the broader foreign policy priorities of the Trump administration. Namely, shoring up U.S. influence over Latin America amidst a growing Chinese presence in the region.

In the past few years, China’s involvement in Latin America has risen substantially. In 2018, it officially became the continent’s second-biggest trading partner. In that same year, China proposed to extend its signature Belt and Road Initiative to an enthusiastic response, with 16 countries expressing an interest in joining the initiative—including Bolivia, Chile, and Panama.

Long having been considered one of the richest regions in the world for natural resources, China has been seeking to gain a share of copper exports from Chile, iron-Ore from Brazil, and lithium deposits in Bolivia to fuel its still expanding economy. In order to better facilitate this cross-Pacific trade, China has also expressed interest in upgrading the region’s infrastructure.

Despite its historical diversity, Latin America has been a continent of few inter-state conflicts. It has also been a continent where government projection of power in its own domestic borders have been difficult, leading to guerilla movements and drug gangs operating in many cases with impunity. The duality of this political reality has stemmed from one factor, geography. Jungle makes up a total of 79% of Latin America’s land and it is also home to vast mountain ranges such as the Andes.

The jungle-dense geography of Latin America makes overland trade costly and inefficient. Given the importance of seaborne trade to the region, it is no surprise that China has almost 19 cooperation pacts to upgrade port facilities in countries such as Chile, Brazil, and Panama. The most impressive project however, has been the Bi-Oceanic Railway. The brainchild of a meeting between China and the former President of Bolivia, Evo Morales, in 2013 consists of a 3,750 km railway that will bypass the complex terrain of the Andes mountains and the Bolivian Amazon. 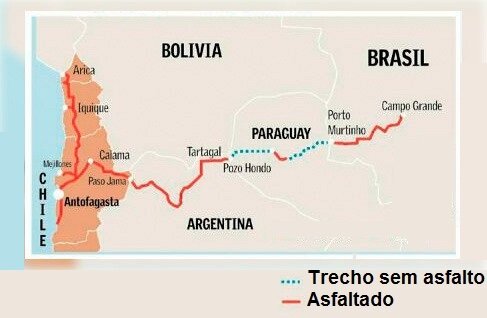 Most importantly, for a major market like Brazil, the effect the railway will have on its Pacific trade will be of great expedience as it will no longer have to circumnavigate the southern tip of the continent. Rather, it can rely on a newly created inland route that will allow its products to be exported via Chile to the markets of Asia, all with an estimated 14 day reduction in its total travel time and save the country $760 per container shipped. What is more, is that the railway line will abet the development of traditionally landlocked countries such as Paraguay and Bolivia, by giving them vital access to the sea. Naturally, as the idea for the project had been the product of both Chinese and Latin American cooperation, so too will Chinese and Latin America cooperation provide the funding and see its ultimate fruition.

But of greater value than the infrastructure projects, may very well be China’s investments in Latin America’s tech sector. Latin America’s economic history has tragically been characterized by its enslavement to commodity prices. Good times usually resulted in relative wealth gains and increased standards of living, whereas times of commodity price crashes have ushered in recession and domestic instability. Upgraded infrastructure will boost Latin American exports but it will, as it always has been in the past, be for naught if the continent’s countries do not diversify and create a strong middle-class to shield the country from economic shocks induced by falling commodity prices. China has had such a solution with its investments into Latin America’s burgeoning startup scene. Valued at 1 billion dollars, it is a strategic investment which will ensure that while exports will continue contributing to government revenues, the creation of a knowledge economy will finally help Latin America surge past the middle-income trap into greater prosperity.

This bountiful cooperation has most certainly caught the attention of the United States, which has long considered the continent to be its backyard. It is an interesting position to stand by, especially from an administration that has done nothing but level insults to the citizens of Latin America and ignore bi-lateral relations as a whole, save for a select few relationships such as with the similarly fascistic Jair Bolsanaro. But as the failed coup in Venezuela and the unrightful ousting of Evo Morales has shown, U.S. imperial ambitions prohibit it from ceding an inch of what it perceives to be rightfully its own.

A prelude to the current tensions involving the IDB manifested in 2019, when the organization abruptly cancelled a summit that was to be held in Chengdu as a result of U.S. pressure. This trend now culminates with the ascension of Claver-Carone. His tenure as the bank’s president will consist of nothing less than the enlistment of Latin America into a new Cold War it has no wish to be a part of.

What is more egregious is the fact that Trump is extending the same callousness through which he has treated his own people in the COVID-19 pandemic, to Latin America as well. Latin America has been devastated by COVID-19 with five of the ten worst-affected countries located in the region. The coronavirus has not only exacted a crippling human toll but exacerbated the economic conditions in the region, which even prior to the outbreak had been afflicted with slowing growth, widening economic inequality, and growing discontent.

While Washington has politicized every facet of the pandemic right down to the scientific validity of wearing a face mask, China and similarly socialistic Cuba have filled the void in helping “America’s backyard” combat the pandemic. It has done so through medical aid and granting South American countries priority in the eventual dissemination of the SinoVac vaccine.

More importantly China, as the only country thus far to have recovered economically from the pandemic, will be the chief driver of the broader global recovery. As such, the economic projects proposed by China in South America are no longer just business, but paramount in preventing the common people’s further degradation into absolute poverty.

However, with complete hegemony over an institution of regional development, the U.S. will now dictate the terms through which much needed aid can be allocated to its struggling member states. Through sheer might, it will likely impose terms that countries must shun economic relations with China as a prerequisite for American funds that they have no guarantees will even come. In a more extreme iteration of U.S. unilateralism, it could even impose punitive measures on countries that continue to receive COVID-19 relief from China and even dictate which vaccines Latin American countries can distribute to its citizens.

Much to the chagrin of even some foreign policy hawks, Donald Trump has shunned multilateral organizations, soured bilateral ties, and withdrawn from international institutions. With the selection of a Trump asset as IDB president, the question arises: how might Trumpian unilateralism be wielded over a multilateral institution such as the IDB?

The inauguration of the first-U.S. born president of the IDB once again raises the occasion to imagine a future for Latin America beyond the vice grip of U.S. imperialism—a future seemingly more remote as the region is instrumentalized as a theater in the U.S.-led Sino-American Cold War.