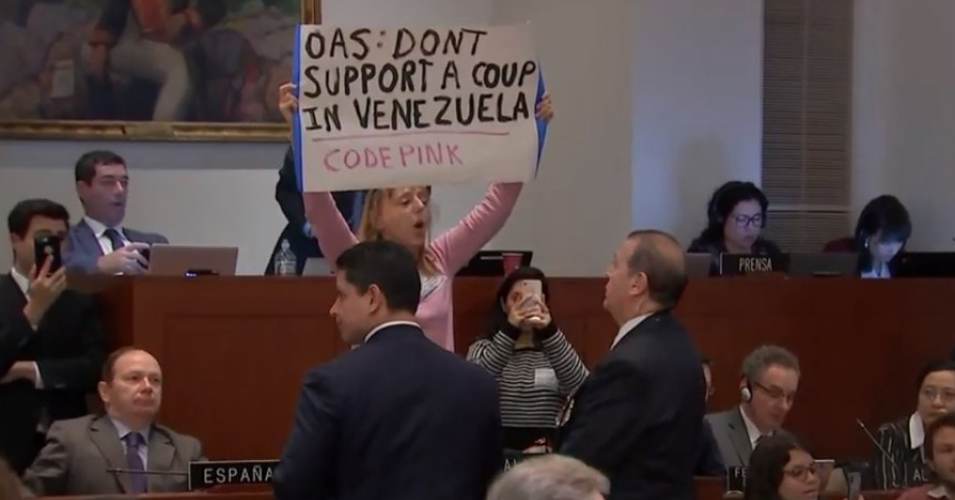 “A Coup Is Not a Democratic Transition!” US Peace Activist Interrupts Pompeo Speech On Venezuela

Above Photo: Human rights activist and CodePink co-founder Medea Benjamin on Thursday interrupted a meeting of the Organization of American States (OAS) in Washington, DC as she spoke out against the coup attempt being orchestrated by Secretary of State Mike Pompeo and other anti-democratic forces. (Photo: Screenshot/Twitpic/@dancohen3000)

“Do not listen to Secretary Pompeo!” declares Medea Benjamin during meeting of OAS delegates in Washington

U.S. peace activist Medea Benjamin, co-founder of CodePink, called on her government to end its meddling in the affairs in Venezuela on Thursday—and called on other nations in the region to respect Venezuela’s sovereignty—as she interrupted remarks by Secretary of State Mike Pompeo during a meeting of the Organization for American States (OAS) in Washington, DC.

“Don’t support the coup!” Benjamin declared, holding up a sign at the end of the council room. “A coup is not a democratic transition! Do not listen to Secretary Pompeo!”

An activist with @codepink disrupted a meeting of the OAS to denounce their role in the coup underway in Venezuela. pic.twitter.com/SDiHasAHsc

BREAKING: @medeabenjamin just disrupted @SecPompeo “Pompeo & OAS should not supporting coup on Venezuela. The US has long & sorted history of supporting coups in Latin America & they always turned out horrible for the people. Look at Guatemala 53’ Chili in 73’, Honduras today.” pic.twitter.com/euzV0T1cUG

Pompeo used his remarks to parrot the Trump administration’s claim that the government of President Nicolas Maduro, who was reelected president in May of last year, is not the legitimate president of the country and called his government “morally bankrupt” and “undemocratic to the core.”

Benjamin’s fellow CodePink co-founder Jodie Evans, however, was having none of that:

While the OAS has so far backed efforts to undermine Maduro, Laura Carlsen, who heads the Center for International Policy’s Americas Project, wrote this week that the regional body has become a misguided machine seeking “regime change” in Venezuela while “abetting corruption and dictatorship” across Latin America.

Specifically criticizing Luis Almagro, the OAS Secretary General, Carlsen explained that “throughout his tenure, Almagro has acted against many of the basic principles and mandates of the organization and consistently represented U.S. interests above those of its neighbors, generally supporting allies and punishing adversaries of the U.S. government.”