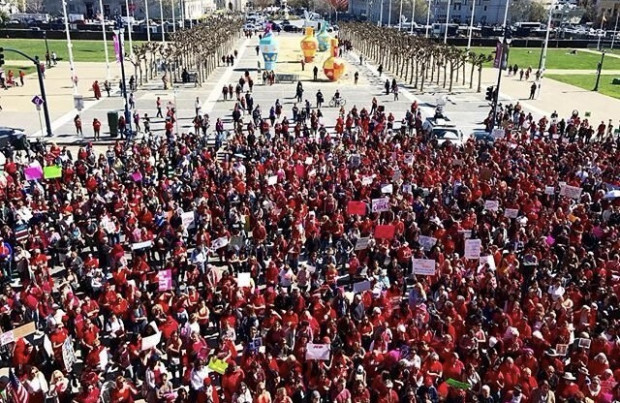 Here are the women you missed.

Cities across the country were awash in red on Wednesday as thousands gathered to show support for International Women’s Day.

The rallies ― which mobilized men and women in New York, California, Pennsylvania and Washington, D.C., among other states ― was part of “A Day Without A Woman,” which organizers described as a day of “economic solidarity.”

Women were encouraged to take the day off and strike to “highlight the economic power and significance that women have in the U.S. and global economies,” Women’s March organizers said. Many people wore red to show their support for the movement.

The strikes were similar to last month’s A Day Without Immigrants, a nationwide protest against President Donald Trump’s immigration crackdown.

The strike in New York City began as early as noon, starting in Central Park before moving to Trump International Hotel, and later to Washington Square Park.

Maribeth Whitehouse, 53, a middle school special education teacher in the Bronx, said she took a personal day from work to attend her first-ever strike.

“Attending this strike is something you have to wrestle with as a teacher, because you’re leaving your students for a day. But teachers use many ways to instruct, including teacher modeling,” Whitehouse said. “And today I’m modeling social justice for my students.” 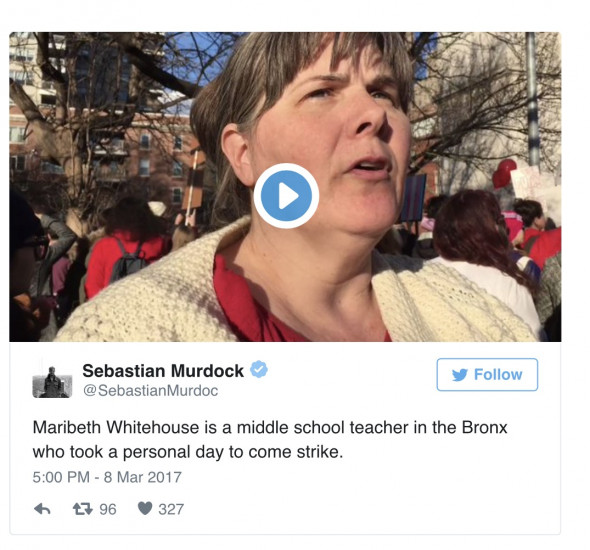 She said she has noticed an uptick in hateful speech among some students ever since Trump was elected. Other kids, she said, came to school after the election in tears because they were afraid of the future.

“They’re worried about their parents being deported, or separated from their relatives,” she said. Some parents have started calling her on the phone for teacher meetings rather than showing up in person because they worry about being taken by Immigration and Customs Enforcement agents, she added. 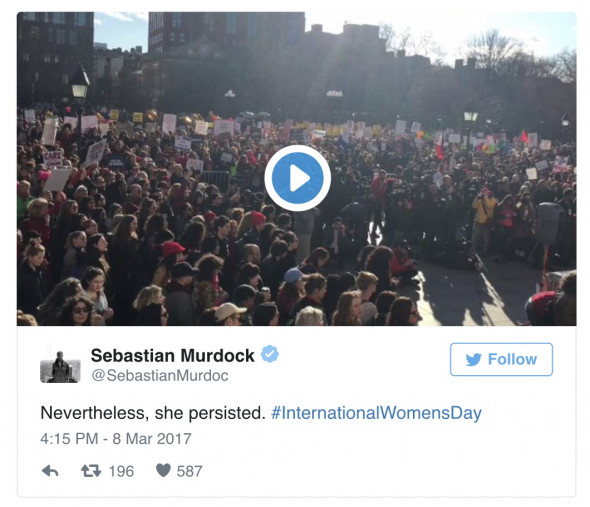 Some of the organizers of the Jan. 21 Women’s March on Washington were arrested outside Trump Hotel in Manhattan after engaging in civil disobedience ― cops had demanded they get off the street, and they refused.

The crowds in Los Angeles and outside San Francisco’s city hall were gargantuan.

She said she’s been keeping a list of “20 to 30 issues” that she calls Congress about every day.

“I think they’re just kind of waiting for us to lose interest,” she said. “Steve Bannon even made a comment about how he’s waiting for this to die out due to apathy, and I don’t see that happening. I think a lot of people are very serious about this and not willing to watch their country be destroyed by Trump and his agenda.” 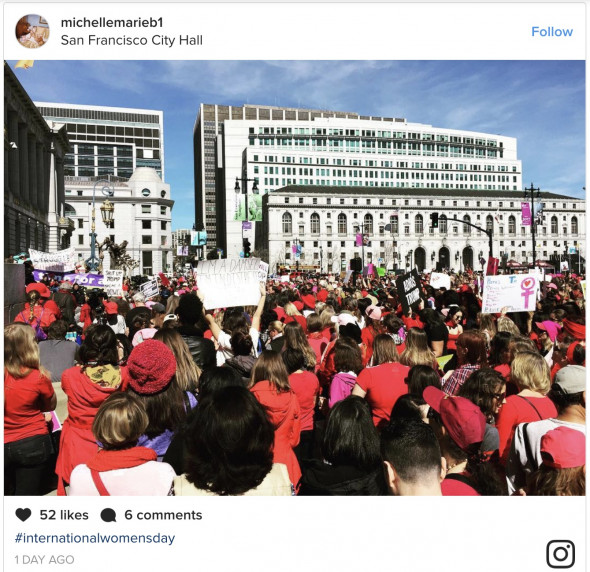 In Chicago, roughly 400 people gathered Wednesday evening at the headquarters of the Chicago Teachers Union. They represented an array of groups: minimum-wage activists Fight for 15, local teachers, health care and transit union members, Planned Parenthood of Illinois, and immigrant rights and anti-racism groups.

Chloe Stratton, 33, said she attended Wednesday’s rally in part to promote transgender inclusion at the events organized by the coalition behind the Women’s March.

Stratton, a trans woman, said she was “terrified and angry” in the wake of Trump’s recent order that rescinded federal protections for transgender students. “It’s even harder for those young students — as you grow older, you learn how to cope with these things. But for a kid, it’s just so hard.”

Despite the actions and remarks by the Trump administration that have raised concerns among many women, a feeling of determination was widespread at the rally.

“He just makes me stronger,” said Stratton, who plans to speak at a women’s rally Sunday in Chicago. “Everything he does just makes me want to fight harder.”

Earlier in the day, Trump tweeted that he has “tremendous respect for women.” 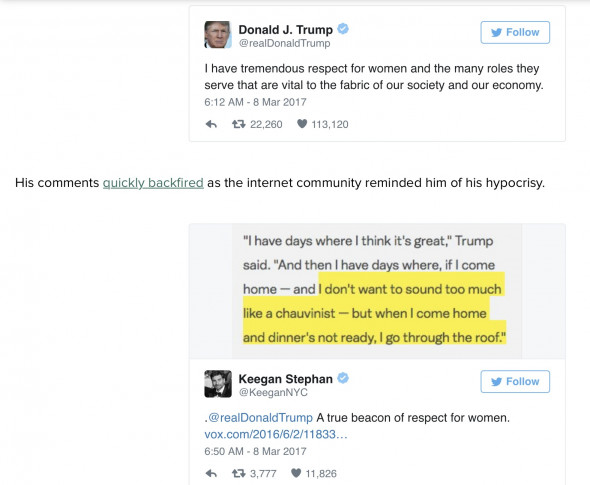 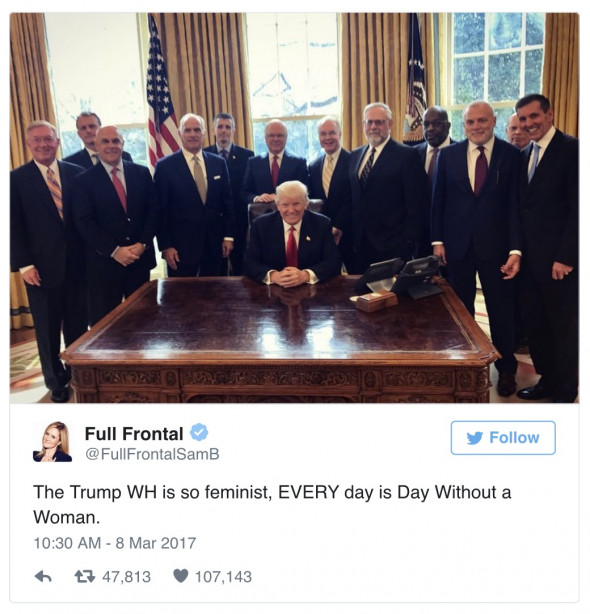 Trump was also on blast for a now-infamous video in which he advocated for sexually assaulting women and bragged that he tried to have sex with a married woman.

When you’re famous, Trump said, “you can do anything. Grab them by the pussy.”

On Wednesday, women showed they weren’t having it. The processions were partly a show of solidarity against sentiments like Trump’s, as well as a soapbox for women who have gone unheard for far too long.

“When you find your voice, you never want to shut up,” said Bree Washington, 26, in Los Angeles. “I feel like we’ve come full circle ― that we’re still fighting on issues from the ‘60s like equal pay for women. I want to be a part of something bigger than myself, for my grandmothers, for my mother, for myself.”

It would appear even Lady Liberty participated in the strike. The statue went dark for two hours Tuesday night in what the National Park Service called an “unplanned outage” while repair work was done. But we like to think the real reason was out of solidarity for her fellow women. 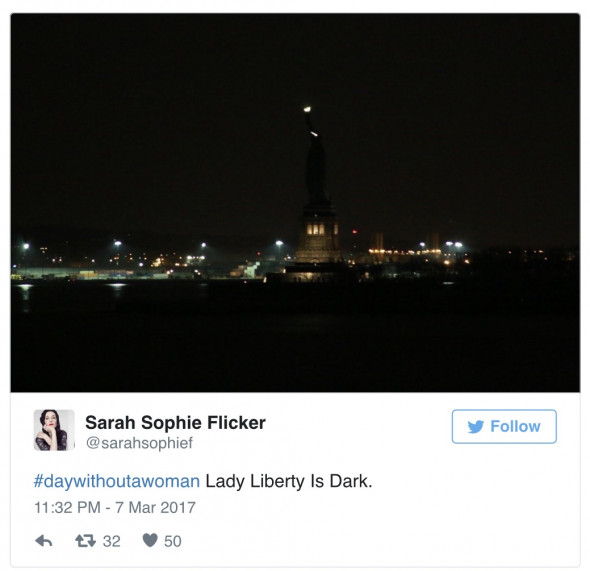