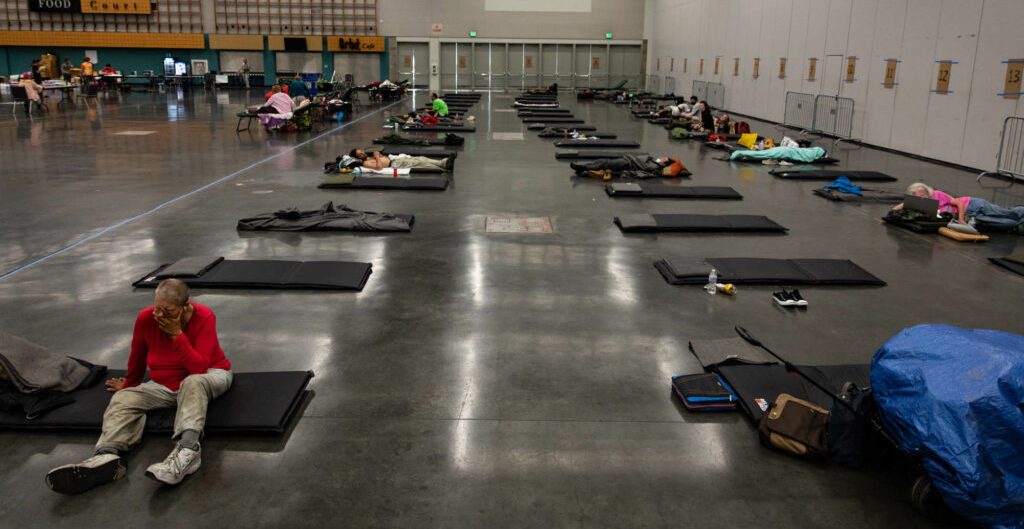 And More Deaths To Come.

Some Scientists See A Day When Heat-Related Deaths May Match Those Of All Infectious Diseases.

It was the most extreme heat wave on record in the Pacific Northwest. And as officials count the heat-related deaths over the next weeks, it will almost certainly turn out to be one of the deadliest.

In Vancouver, British Columbia, police responded to at least 65 sudden deaths suspected to be heat-related. And the province’s chief coroner said Wednesday that at least 486 deaths likely linked to the heat had been reported since Friday. The residents of one British Columbia community, Lytton, where a temperature of 121 degrees Fahrenheit was higher than any ever recorded in Canada, were ordered to evacuate because of an encroaching wildfire.

“We’ve never seen anything like this, and it breaks our hearts,” said Sgt. Steve Addison, a spokesman for the Vancouver police department. He said a lot of calls were coming from family members who checked on a loved one in the morning, only to find that they had died overnight.

And in Oregon, the state medical examiner’s office attributed 63 deaths to the heat wave, with more likely to come. On Wednesday afternoon, heat warnings remained in effect for parts of Washington, Oregon and Idaho, with heat advisories for parts of Nevada and California. The East Coast was not spared. Newark recorded its hottest ever June day with a high of 103 degrees Fahrenheit, and in New York, thousands of homes were without power and smartphones buzzed with an energy conservation alert from the city.

As climate change drives up global temperatures, deaths linked to extreme heat are increasing, with some scientists projecting that by 2100, the number of heat deaths will match those from all infectious diseases.

Life-threatening extreme heat linked with global warming has broiled parts of every continent over the last few decades, killing at least 166,000 people from 1998 to 2017, according to the World Health Organization. A 2020 heat wave study found that, since the 1950s, periods of extreme heat have become more frequent, longer-lasting and hotter, matching, and even exceeding climate projections made 20 years ago.

Research on links between heat waves and global warming suggests that several of the most recent extreme heat waves would have been all but impossible were the climate not being warmed by greenhouse gases. Based on the studies, the Fourth National Climate Assessment projects that dangerous heat waves should be expected across much of the U.S., with big impacts to key economic sectors like transportation and agriculture. In the Pacific Northwest, the heatwave buckled numerous roads, melted power lines and caused airport delays, with air travel affected from Canada down through California, as well as Texas and Arizona.

“Perhaps the most important thing for everyone to realize is that extreme heatwaves are becoming more frequent and hotter because of human-caused global warming,”said University of Michigan climate researcher Jonathan Overpeck, who moved from Arizona to the Midwest a few years ago partly based on his concerns about extreme heat and lack of water in the Southwest. “The devastating extremes associated with climate change,” he said, “are only going to get worse and worse until we halt the causes of global warming.”

While the intensification of heat waves is well documented, it’s harder to pinpoint global mortality trends linked to them, because heat wave deaths are not always accurately counted. This is especially true in developing countries that lack the resources for the sophisticated statistical evaluations commonly used to count heat mortality. That also makes it more challenging to prepare for heat threats, said University of Oxford climate scientist Fredi Otto, who has studied the data gap.

But from regions where there is data, the threat is clear. A severe and long-lasting 2003 heatwave in Europe killed about 70,000 people, mostly in France. Subsequent research showed that climate change made that summer’s extreme heat twice as likely and was responsible for many of the deaths, because heat-trapping greenhouse gases made the heat wave more intense.

According to a 2016 climate monitoring report by the European Environmental Agency, the number of heat extremes has substantially increased across Europe in recent decades. “It is virtually certain that the length, frequency and intensity of heat waves will increase in the future,” the report said, leading to a “substantial increase in mortality over the next decades, especially in vulnerable population groups, unless adaptation measures are taken.”

Data from the U.S. Global Change Research program show the average number of heatwaves in major cities across the country has risen from two per year during the 1960s to six per year in the 2010s. The average heatwave season across 50 major cities is now 47 days longer than it was in the 1960s, the data show.

In the United States, the Centers for Disease Control and Prevention calculated that extreme heat “caused or contributed to more than 7,800 deaths” from 1999 to 2009, while some studies used by the Environmental Protection Agency show an average of 1,300 heat deaths per year.

Brian Stone Jr., director of the Urban Climate Lab at the Georgia Institute of Technology, said actual deaths related to excessive heat are much higher, and can only be calculated months after heat waves through statistical analysis. But each heat wave shows the need for more attention to how to adapt to the heat, he said. For all the deserved attention that the Biden administration is putting on reducing greenhouse gas emissions, the federal government should also be doing more to help communities handle the deadly consequences of rising temperatures, he said.

Too many people see heat waves as isolated weather events, when they really are a sign of deepening climate change, Stone added. “I try to imagine those current conditions as the normal regime of summer temperatures, because that is where we are headed. We seem to lose sight of the heat once the spiking mercury has subsided.”

Lisa Lapointe, the chief coroner in British Columbia, said the almost 500 deaths reported there represented a 195 percent increase over the approximately 165 deaths that would normally occur in the province over a five-day period. She added that she expected the number of deaths to grow, and that the increase was likely to have been caused by extreme heat.

The Pacific Northwest heatwave is a major health threat mostly because people who live in the region are not acclimated to extreme heat and are not prepared to deal with it.

What could sicken or kill people in Seattle might feel like a nice fall day in the Southeast, said Samatha Scarneo-Miller, a health scientist at the West Virginia University School of Medicine who specializes in heat stroke from exertion. Such strokes can kill athletes, like football players during summer practice sessions, and Scarneo-Miller said she is worried that heat-related deaths across the country could soar this summer.

“I think this is about to be the deadliest summer we have ever had with exertion heat stroke,” she said, explaining that student athletes might be overzealous after the pandemic lockdowns and their athletic programs might ignore safety precautions.

Rising heat will “test our human physiology,” and also our health care systems and practices, said Rebecca L. Stearns, the chief operating officer at the Korey Stringer Institute at the University of Connecticut. The institute conducts research and education on how to keep athletes, soldiers and laborers safe from extreme heat.

“We are going to see a lot more issues like we see with this heat wave, and we know the climate is just getting hotter,” Stearns said. “The population needs to be aware that it is not an aberrant issue and will only become more predominant.”

Laborers will need more rest and water breaks, and working hours may need to shift away from the hottest hours of the day. People may need to learn how to cool themselves down before going outside and exerting themselves, with techniques like chilling their forearms in cold water, drinking slushy ice water or jumping in a pool.

The health care system also will need to be better equipped, Stearns added. Most hospital emergency rooms don’t have cooling tubs, which have been shown to be effective in treating heat stroke from exertion. And many ambulance crews don’t have rectal thermometers, which she said are the most accurate way to determine whether someone has heat stroke.

She said that violence goes up by about 4 percent and suicide increases by about 1 percent per degree Celsius of warming. “The reasons for that probably have to do with neurotransmitters in the brain,” she said. “You know, our blood literally boils, in certain ways, when we are exposed to these high temperatures, and there are changes in [messenger chemicals in the brain like] epinephrine and serotonin and all sorts of other physiological things that make us less emotionally stable.”

Extreme heat in general raises levels of unease and depression, Haase said. It also “in a completely linear way, raises the incidence of violence and civic conflict, both interpersonal violence, as well as group-on-group violence of all kinds,” she added.

Heat wave threats are widespread and pervasive. For example, according to the Centers for Disease Control and Prevention, farmworkers die from heat stroke at a rate nearly 20 times greater than all other U.S. workers.

Bruce Goldstein, president of Farmworker Justice, told Congress during a recent hearing on proposed legislation to protect workers from excessive heat exposure, that many employers do not offer reasonable protections against heat stress, and many farmworkers are reluctant to speak up about unsafe conditions due to fear of retaliation.

And based on climate projections, it’s reasonable to expect that many other places in the U.S. will experience similar, and worse, heat extremes in the next few decades, said Michael Gerrard, director of the Sabin Center for Climate Change Law at Columbia University in New York.

That means sweeping measures to protect a growing number of vulnerable people are needed. He said a national heat standard for workers from the Occupational Health and Safety Administration would be a good first step.

Public Citizen, a nonprofit organization that advocates for the public interest, petitioned the agency for such a safety rule in 2017, but the petition was rejected, he said.

In a 2019 working paper, Gerrard outlined other legal tools that communities use to cope with extreme heat, and posted some of the key points on Twitter as the Pacific Northwest heat wave peaked.

Number one on the list is expanding the implicit habitability requirements for landlords to provide protection against heat, as well as cold. “Almost everyone will need air conditioning,” he said, “but not everyone can afford it. There are government programs that will pay for air conditioners, but they don’t pay for the power. There are a lot of poor people who have air conditioning they can’t afford to run.”

Revamping the federal energy assistance program to cover that cost would save lives immediately, he said, adding that, “A large percentage of public housing in the U.S. lacks air conditioning, that needs to be corrected.”