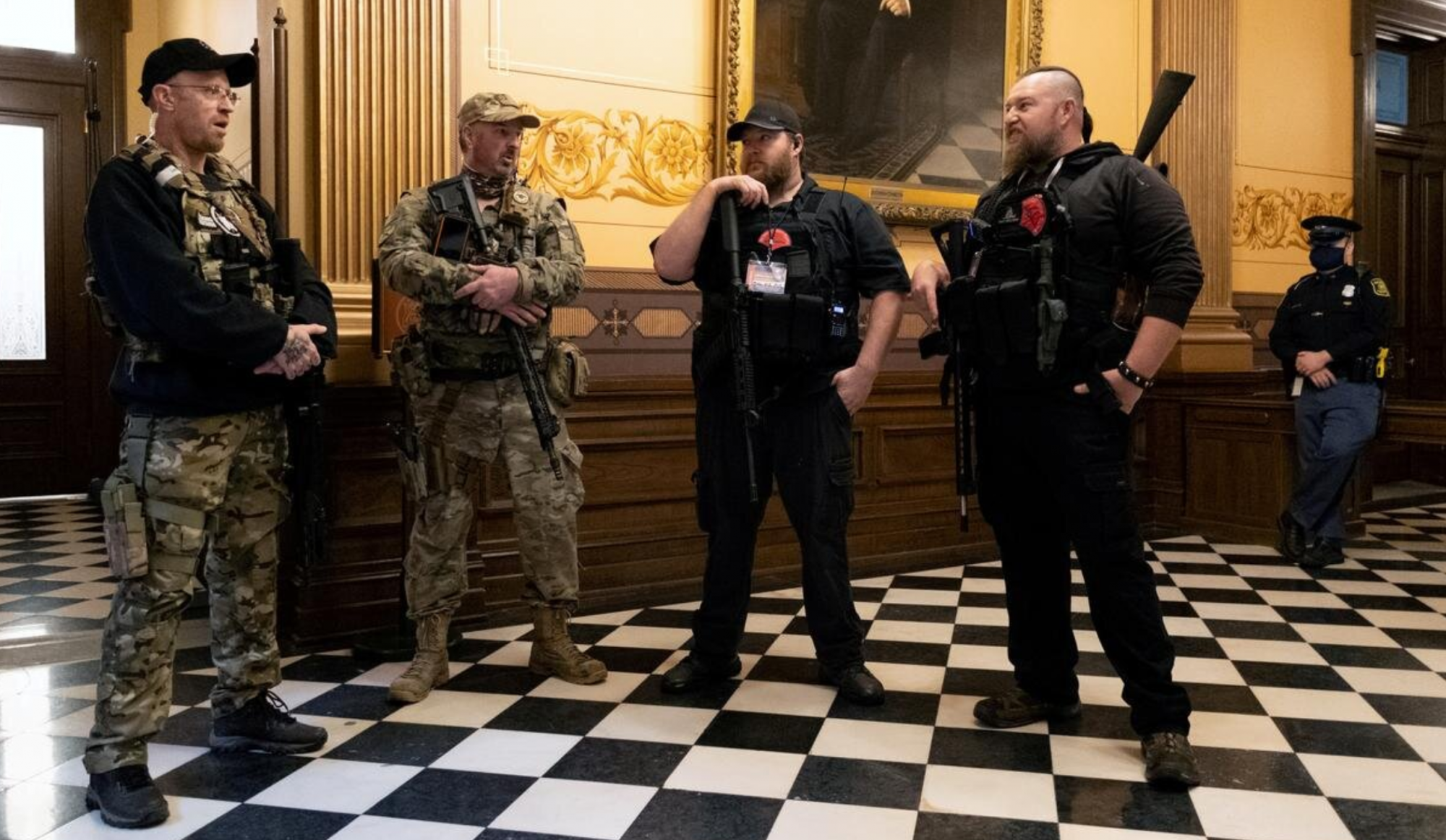 A Delusional Nation In Decline

The United States Is Coming Apart At The Seams, And No One Seems To Notice.

In recent weeks, the fabricated “Reopen America” movement, funded and focused by Right Wing billionaires and conservative media, has led to protests around the country, including in Michigan, where white supremacist militias have used it to their advantage for the purposes of recruitment and action. These militias have stormed the Michigan state legislature, interrupted business, and, as of this week, shut down the government of Michigan for fear of possible violence.

Any student of history understands the process by which nations slide into authoritarian abyss. It comes, most often, after years of political and social decay, wherein the people lose faith in their corrupted governments and systems, are won over by a budding authoritarian, and watch lawlessness, both in the form of corruption and in out and out fascism, comes into full and unavoidable view. Unfortunately, we’re in one of those moments now, but Americans just aren’t ready to see it.

Michigan is just the first state to experience this problem in this moment. Of course, in Oregon we saw an outlaw group led by the Bundy Clan occupy federal ground and escape consequences, but this new incident is an escalation of a trend that we should become unfortunately accustomed to. As governments and countries fall apart, the appearance of paramilitary forces is to be expected. It is a seizure of authority from citizens with plans and designs to forego democratic institutions in favor of authoritarian measures.

The danger lies not only in the physical threatening, but in the societal repercussions. It feels now almost certain that the stalemate in Michigan, between a governor protecting her constituents from a deadly pandemic and a group of armed men looking to start a race war and install a fascist dictatorship, could lead to violence. That’s what these demonstrations are about. Putting people in pressurized situations and waiting for the tinderbox to ignite. Each march and protest and siege is about upping the ante while awaiting the terrible next act.

But even if there is no violence, the political act of intimidating legislatures, of interrupting the people’s business with weapons and maneuvers intended to terrorize lawmakers, is an affront to the concept of an open and democratic society. Even while no blood has been shed, and hopefully none will be, armed men stalking the statehouse and occupying the halls of a democratically-elected legislature is a symbol of violence as a means of governing.

These moments inspire other actors to do the same, and we will probably see more incidents of mobs of Americans and terrorist organizations occupying public spaces. It is infectious and as it grows it only hastens the decline of a nation and its democratic institutions. This is the case and has always been the case. Meanwhile, the story is largely just a blip on a radar of continued coverage of Donald Trump’s lies, scandals, and conspiracy mongering. And those who should know better show concern, but are slow to admit the growing existential threat lingering over the nation.

We are watching America in decline, an empire coming apart at the seams. We can bury our heads in the sand and pretend it isn’t happening, but it doesn’t make it any less true. As long as criminals go unpunished, whether they be in the White House or engaging in political terrorism in the halls of statehouses around the country, it quickens our slide. This will not simply go away and it will not heal itself.

Jared Yates Sexton is the author of American Rule: How A Nation Conquered The World But Failed Its People, available for pre-order from Dutton/Penguin-Random House. His work has appeared in The New York Times, The New Republic, The Daily Beast, Politico, and elsewhere. Currently he serves as an associate professor of writing at Georgia Southern University and is the co-host of The Muckrake Podcast.