A Dispatch From the Caravan

The massive open migration from Central America highlights the growing sense of desperation in the region.

On March 14, NACLA will be celebrating its 50-year history with a special gala fundraiser in New York City. Tickets are now on sale, click here for more information.

The new year began with the ongoing exodus of Central Americans as part of caravans of migrants and asylum seekers, which gripped international media in 2018. With continued pressure from the United States, migrants face an increasingly hostile and militarized response from Mexico.

The first caravan to leave formed two groups as they set out from San Pedro Sula in Honduras on January 15, taking two different routes north. One traveled the route taken by previous caravans through the Aguas Calientes border crossing and the other took the coastal route through the Corinto border crossing.

“There is no employment in Honduras,” Mario José Orellana, a 25-year-old campesino from Lempira, said. “If there were work in my country, then I wouldn’t be here now.”

He previously earned around 10 thousand Lempiras, or 400 dollars, per month, but in recent years this has fallen to only 3000 Lempiras, or about 120 dollars, beginning in 2018.

“This is why we are trying to leave our country,” he said. “It is very difficult there.”

The caravan quickly grew to thousands of Hondurans, Guatemalans, Nicaraguans, and Salvadorans, which formed another caravan that left San Salvador a few days after the caravan from Honduras.

In recent years, the open migration of primarily Hondurans and Salvadorans as part of caravans has become the preferred means of attempting to reach the United States. The use of caravans is in part for protection, as well as a means at avoiding the increase in cost of traveling with coyotes—migrant guides that the United States considers to be human traffickers. In 2018 and early 2019, thousands of migrants and asylum seekers joined caravans in search of a better life in the United States.

The migrants and asylum seekers of the caravan also were drawn by both the “American dream” and promises made by Mexican President Andrés Manuel López Obrador, who stated in January that there were 4,000 jobs available along Mexico’s southern border. But a message broadcasted on a loudspeaker at the border contradicted the Mexican president’s statement, saying that Mexico would assist migrants to find work in their countries of origin, which Mexico has promised to provide as part of two governmental programs along Mexico’s southern border and in El Salvador and Honduras. The contradiction generated concerns among migrants that Mexico would lead to the rapid deportation of migrants who registered with Mexican immigration officials.

The concerns of deportation led migrants to decline offers from immigration officials to pass through in small ordered groups to register with officials. A few had taken advantage of this opportunity days earlier after a smaller group of migrants had arrived at the border. Others remained waiting for the rest of the caravan to arrive.

On January 20, thousands of migrants crossed the Suchiate River, which marks the border between Mexico and Guatemala. The caravan was confronted by Mexican National Guard troops, which utilized teargas to push the caravan back to the banks of the river. Other migrants were detained by Mexican immigration officials, who were working alongside the National Guard. A small group of migrants remained overnight after crossing the river in makeshift tents on the beach on the Mexican side of the border. Others returned to Guatemala to reorganize. 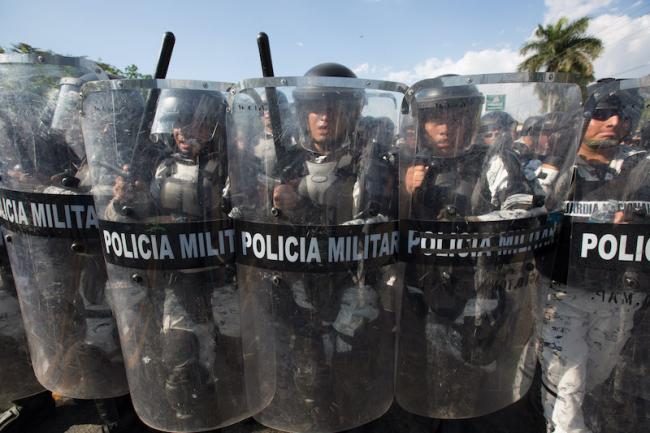 Days later, on January 23, the remaining caravan set out again in the early morning to once again cross the river into Mexico. Over one thousand migrants began to walk down Federal Highway 200 towards Tapachula, Chiapas. Hours later, the caravan was again intercepted by hundreds of National Guard troops, which used riot gear and pepper spray to break up the caravan.

Women and children cried as immigration officials forcibly pushed the migrants onto buses destined for the Siglo 21 immigrant detention facility in Tapachula. Migrant rights activists in the region condemned the heavy-handed crackdown by Mexican officials.

The López Obrador administration had initially appeared to be welcoming to the mass exodus of Central Americans, granting humanitarian visas to thousands of migrants in early January 2019. This policy was abruptly changed the same month following the Trump administration’s threats of tariffs. Since then Mexico has functioned as the United States southernmost border, keeping what migrants have entered in the region, and limiting the movement of new caravans.

Contradictions in Mexico’s Response to Migrants

Across the region, governments have followed the Trump administration’s example and attempted to crack down on migration. The official Twitter account of the United States embassy in Mexico began regularly tweet anti-migration images, including a menacing image of Donald Trump warning that migrants  who cross the Guatemala-Mexico border cannot apply for asylum in the United States, and messages stating that asylum claims are nearly impossible in the United States.

Mexico adopted the Trump administration’s zero-tolerance policy towards migrants after Trump threatened the country with tariffs in early 2019. The resulting policy, the Migrant Protection Protocols—known as the “Remain in Mexico” policy— forced over 59,000 migrants to wait out their asylum claims in northern Mexico.

In the meantime, the Mexican government has maintained a contradictory messageon migration. On one hand, the government utilized language of human rights and the protection of migrants, often referring to detentions as “rescuing,” while at the same time establishing a heavily militarized response to migration.

In 2019, the administration of López Obrador established the National Guard—a fusion of elements of the military police, federal police, and Mexican marines—into a border security force. By the middle of 2019, over 6,000 elements of the Guard were deployed to Mexico’s southern border with Guatemala. The National Guard has blocked caravans from leaving the southern Mexican states in collaboration with the Mexican National Institute of Migration. Acting U.S. Department of Homeland Security Secretary Chad Wolf has praised Mexico’s efforts to stop migrants. This increased crack down on migrants comes after Trump had further threatened Mexicowith increased tariffs in July if the United States’ southern neighbor did no secure Mexico’ s border with Guatemala.

The agreement with Guatemala was met by protests, with many arguing that Guatemala, as a country that has the highest rate of people in the region leaving on the migrant trail, is not a safe country for migrants. The agreement was also challenged in Guatemala’s Constructional Court by ex-foreign relation ministers. The court ruled that the country’s congress must approve the agreement, but this was ignored by officials in the Morales administration, who argued that it did not need to be approved by Congress.

The agreement went into effect November 21, 2019, when the first Honduran was sent to Guatemala on a flight arranged by the United States Immigration and Customs Enforcement (ICE). As of February 2, 2020, the United States has deported 368 Hondurans and Salvadorans to Guatemala as part of the agreement, according to data from the Guatemalan Institute of Migration. The majority have chosen to return to their home countries, but Father Mauro Verzeletti, who directs a migrant shelter in Guatemala City, has suggested many of these people have returned to the migrant trail. 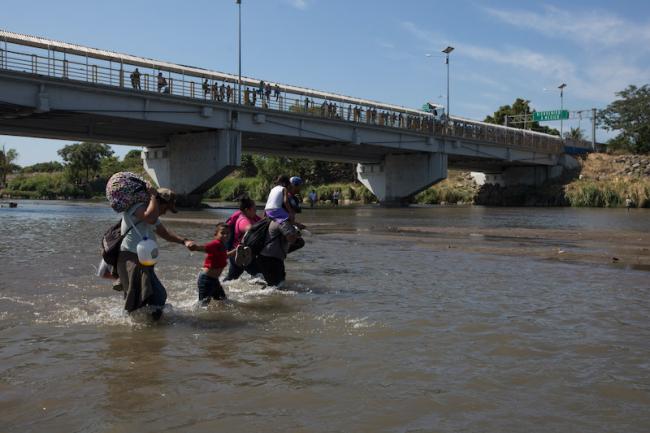 The massive open migration from Central America highlights the growing sense of desperation in the region. Embedded institutional corruption, poverty, rising costs of basic goods, rising influence of organized crime, and both gang and state violence continues to push migrants to make the increasingly dangerous journey to the United States in search of a better life.

The situation has continued to grow worse in Honduras since the illegal re-election of Juan Orlando Hernández in 2017. The re-election was met by massive protests and subsequent state violence. Many in the caravan also pointed to the rising costs of living in Honduras, arguing that the country’s low pay means they are often unable to pay for basic services, including medical costs and electricity, which began the process of privatization in 2016.

“I’ve applied in many places, but I haven’t found any work,” said Paula Bonilla, a 22-year-old from Tegucigalpa who graduated with the equivalent of a bachelor’s degree in international commerce in 2018. “Imagine, I have a Licenciada, but I continue to work in stores that sell used clothing from the United States. I earn only 200 Lempiras ($8.13) a day. That is barely enough to pay for breakfast and lunch. It is horrible.”

She adds, “Our government is extremely corrupt. The government only gives work to those who voted for [Orlando Hernández].”

Her friend Cristian Rivera Garcia, who comes from Santa Barbara, Honduras, added, “Everyday things are more expensive. The cost of basic items has gone up and the cost of electricity has gone up. We earn only enough to survive, we are unable to save. What do I do if my child, my wife, or I get sick?”

Furthermore, anti-corruption efforts ended in January when Orlando Hernández announced he would not renew the Organization of American States backed anti-corruption body, the Mission to Support the Fight against Corruption and Impunity in Honduras, commonly known as MACCIH. The administration of Orlando Hernández is also accused of being under the influence of drug traffickers. This is especially evident after the president’s brother, Tony Hernandez, was convicted of drug trafficking by courts in the United States. Following the conviction, key witnesses and lawyers have been murdered.

Violence in the region also pushes many to seek reaching the United States. InSight Crime, pointed out that violence in Honduras grew worse in 2019, once again labeling the country as the most violent country in Central America. This trend looks to grow worse in 2020, with the country registering over 100 homicides within the first two weeks of the year.

In Guatemala, while the number of homicides have fallen in recent years, extortions by gangs have risen to the highest levels in the region. Bryan Justin Pinara was one of the migrants who joined the caravan who was sought to reach the United States or Mexico due to the pressure created by gang extoritions. He and his family owned a small restaurant in the municipality of Escuintla, and were extorted 500 Quetzales, or 65 dollars, per week. He was unable to pay each week.

“[The gangs] are threatening to kill me,” he said.

He chose to uproot his family in order to seek asylum in order to escape the threats to his life.

The needs created by the precarious situations mixed with the crackdown on immigration across the region pushes migrants to take increasingly dangerous means of attempting to reach the United States. This includes the need to pay exorbitant sums of money to coyotes in order to pay to cross through territories controlled by drug cartels and to pay off immigration officials along the way. As long as the region suffers from unprecedented levels of structural and direct violence, the caravans and migration will continue in spite of whatever security measures the Trump administration and regional governments put into place.