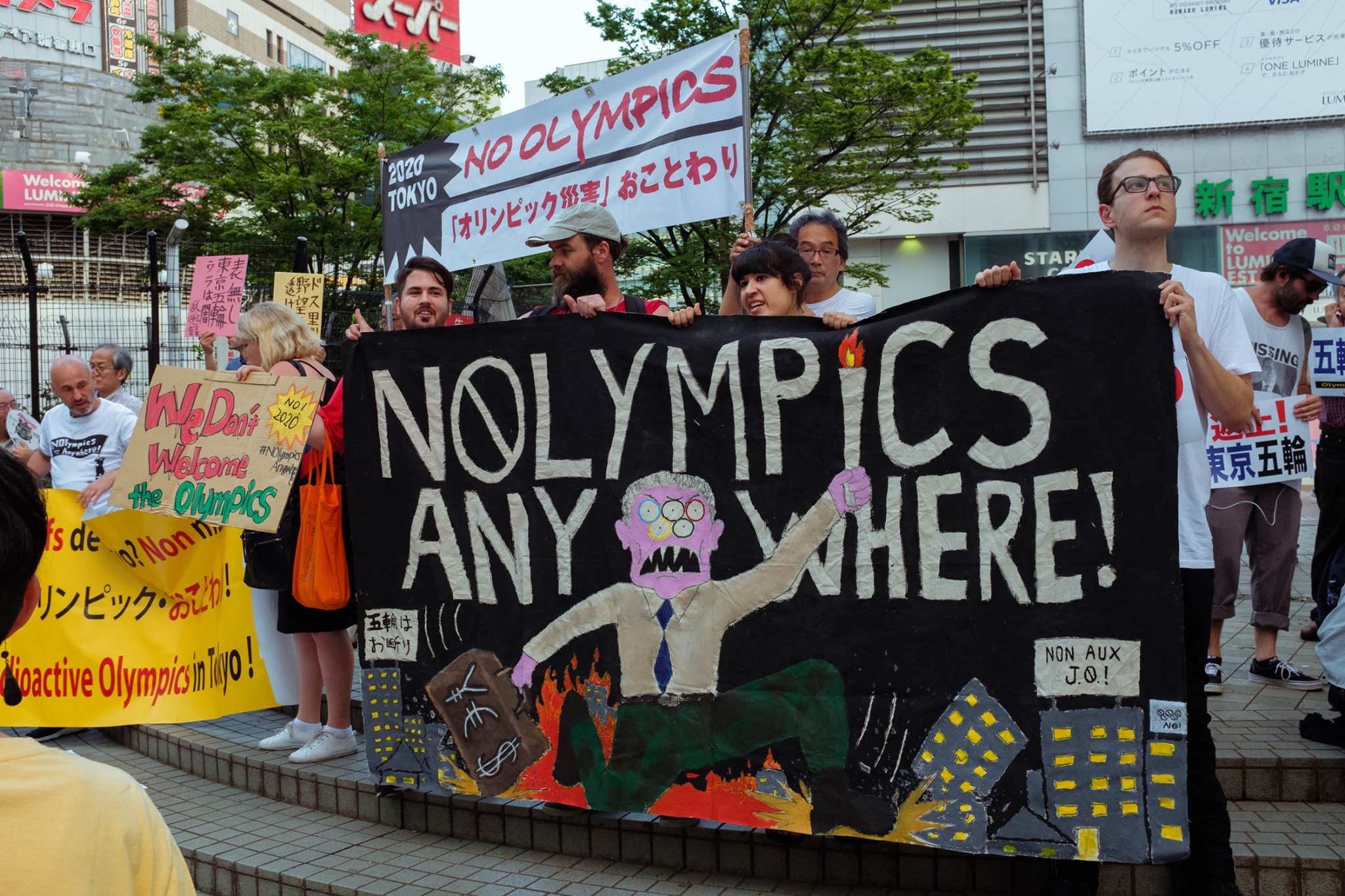 Above Photo: NOlympics LA members hold a banner at a protest in Tokyo during the 2019 anti-Olympics summit, July 2019. NOlympics LA / Facebook.

From Tokyo to Los Angeles, groups are protesting to end the displacement, policing and militarization faced by cities that host the Olympic Games.

Just three months into 2021, police officers wearing riot gear descended on an encampment of houseless people in the Echo Park neighborhood of Los Angeles, forcing residents out in a sweep that went viral on social media. For Los Angeles-based activist Gigi Droesch, the videos were reminiscent of a park sweep that took place in 2015 on the other side of the world — in Tokyo.

“When I was looking at the footage from the Tokyo sweep, it looked really similar to our own footage,” Droesch said. “The way the police were hassling residents — it was the same sort of thing. There were people who were unhoused in this park, and the police came and violently swept them away.”

While some might think it’s a big jump to go from Los Angeles to Tokyo, it was a natural conclusion for Droesch, who has spent the past several years involved in an international movement to end the Olympics and the displacement, policing and militarization that the games bring to hosting cities.

NOlympics LA, the group that Droesch is part of, was launched in 2017 out of the Housing & Homelessness committee of the Los Angeles chapter of the Democratic Socialists of America. It has since grown into a larger campaign made up of various political organizations. NOlympics LA activists focus the bulk of their canvassing efforts on educating their neighbors about the harm that comes with the Olympic games. Their actions include holding teach-ins, encouraging news outlets to cover the Olympics with more scrutiny, using social media to highlight attacks on Los Angeles’s houseless community and providing in-depth analysis of the economic situation in Los Angeles. Their hope is that with enough pressure and correction of disinformation, they can undo the deal that city officials made with the Olympic organizing committee to bring the games to Los Angeles in 2028.

The deal, made by Los Angeles Mayor Eric Garcetti, excluded input of the Los Angeles community. At the time of the bid, Garcetti used a single poll run by a real estate lobbyist — and propped up by a compliant press — to claim that 88 percent    of Los Angeles residents supported hosting the 2028 Olympics. Now, even though Garcetti will not be mayor in 2028, Los Angeles taxpayers will be forced to pay a conservative estimate of $3.2 billion in budgetary overages.

While the group’s website and social media pages are rich with information on how the spectacle of the Olympics has already had an adverse impact on vulnerable communities in Los Angeles, the group refuses to only focus on local issues.

The movement in Tokyo

The 2020 Tokyo Olympics are bringing more attention to the issues that many residents of cities hosting the games face. This was highlighted in a poll taken earlier this year that found more than 80 percent of Japanese people oppose the ongoing games, with 40 percent of those surveyed believing they should be postponed and 43 percent believing they should be cancelled altogether. While much of the recent public scrutiny has been boosted by concerns over the spread of COVID-19, opposition to the Tokyo Games is not new.

In 2013, Tokyo-based activists formed the group Hangorin-no-kai NO TOKYO2020 to shine a light on the inequities the games are now exacerbating. Formed while Tokyo was still just a candidate to host the 2020 games, the group originally consisted of members of Tokyo’s houseless community and their allies. Before long, they expanded their advocacy around housing issues to include a number of concerns among progressives in Japan, such as denuclearization, education and care work, gender equality, nationalism, anti-surveillance and policing.

In the years leading up to the games, Ayako Yoshida, a Tokyo-based organizer with Hangorin-no-kai, witnessed many of these injustices firsthand. In particular, she saw how the Olympics triggered gentrification not only in the construction of venues, but also throughout Tokyo. “[The games] have displaced people — especially the poor — from public spaces, and transformed the city into a place for private capital to generate profits,” Ayako said. “In public schools, kids have been taught to praise the Olympics and act as Japanese patriots.”

In 2017, the Japanese government used the 2020 Olympics to pass an anti-terror conspiracy law, which uses broad wording to give the government more power to repress citizens for acts such as protesting the construction of apartment buildings.

Hangorin-no-kai has not been deterred by the repression. The group has held monthly public protests leading up to the games. One of the largest protests took place a month before the opening ceremony, when around 850 people gathered outside the Tokyo Metropolitan Government Office. Then, on the day of the opening ceremony, 1,000 people participated in a march that shut down one of Tokyo’s busiest roads.

One of the largest overall anti-Olympics actions in Japan took place in 2019, when Hangorin-no-kai hosted an international anti-Olympics summit. The gathering convened groups from cities around the world that either hosted the games in the past or are scheduled to host them in the future, including NOlympics LA.

A history of harm

The recent movement is attempting to challenge the darker side of the Olympic Games, which have a longstanding and often under-scrutinized history. The founder of the Olympics, Baron Pierre de Coubertin, was a French aristocrat with racist and misogynistic views, which — along with his support for nationalism and imperialism — have shaped the culture of the games for their entire existence.

Jules Boykoff, U.S. Olympic soccer player turned prominent critic of the games, wrote about this history in a 2013 article for the Hillsboro News Times.

“The dazzling athleticism on the slopes, rinks and half-pipes need not blind us from critical thinking. Today the games can correctly be described as trickle-up economics meeting Sporty Spice on the hyper-commercialized conveyor belt of corporate capitalism.”

Much of the misogyny and racism carried on by the politics of the Olympics organizing committee can be seen in some of the bigger media controversies that have surrounded the Tokyo Games. For example, many people were outraged when track star Sha’Carri Richardson was suspended and publicly rebuked for smoking marijuana after her mother died. Richardson’s story has caused many to question the expectations placed on Olympic athletes, as well as the role racism and misogyny may have played in adding to the scrutiny of Richardson. The International Olympic Committee typically holds Black women to higher standards, while policing their behavior, their natural hair, their testosterone levels, and other excessive and racist criteria.

In contrast to Richardson’s suspension, U.S. fencer Alen Hadzic is participating in the Olympics after being accused of sexual assault. In fact, the athletic federation that selected Hadzic to compete has created a plan to keep him away from women and out of the Olympic Village just so that he can keep his spot.

While such issues may not provide spectators with a more comprehensive understanding of how the Olympics systemically harm the cities that host them, they have opened the door for criticism of the Olympics as an institution. Droesch spoke on how the controversy surrounding Richardson and Hadzic has made it easier to bring up more systemic problems in conversation.

“What we’ve found is it’s a good opening to tell people ‘Yeah, what you’re talking about is really messed up. It’s really messed up that you can’t smoke a joint once before the games even start,’” Droesch said. “Those are problems, but it goes even deeper than you thought.”

NOlympics LA recently published a syllabus on their website so that anyone can better discuss the harm of the games in their own circles and communities. While they don’t have any upcoming actions scheduled in Los Angeles, they have been using the publicity of the Tokyo Olympics to speak with press and share information on social media.

“The Olympics Games put tremendous pressure on the host city’s local budget, crash the democratic government process and destroy the environment,” Ayako said. “Yet, eventually, the sacrifice will be burdened by everyday people, who are often poor or in the most vulnerable position in the society.”