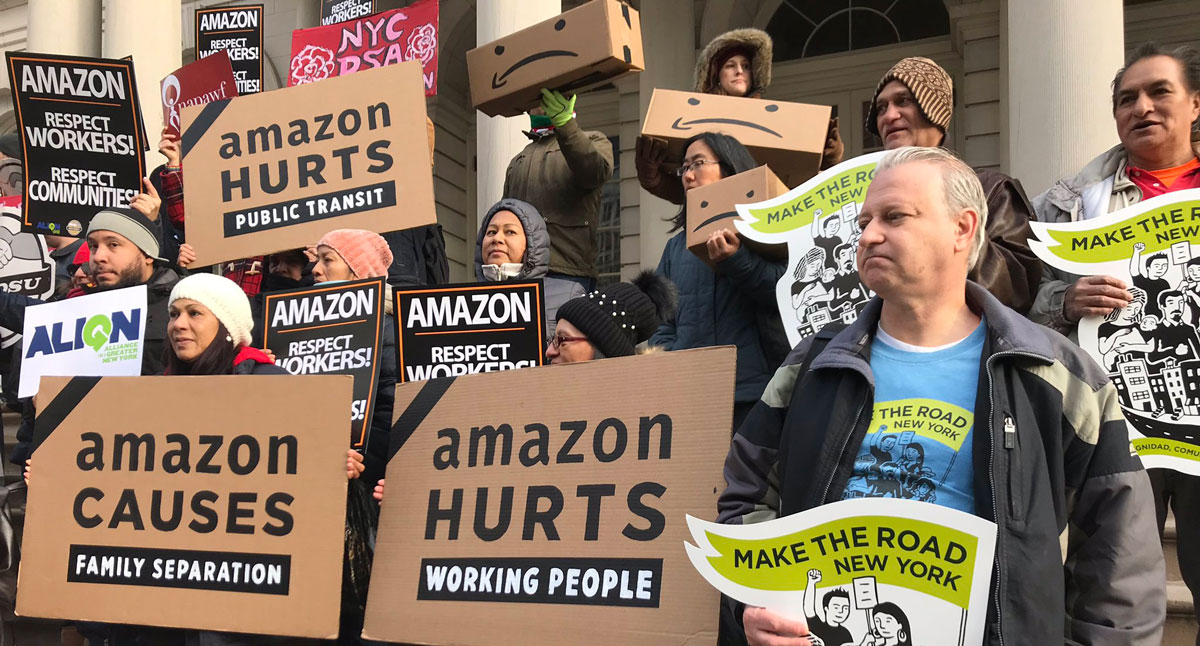 A Grassroots Movement Is Growing To Take On Amazon

I learned about Athena from a NY Times article Activists Build a Grass-Roots Alliance Against Amazon. The article highlighted recent victories by grassroots groups against Amazon writing:

“Last fall, the retailer was forced to begin paying a $15 hourly minimum wage nationwide. In February, it abandoned plans to establish a new headquarters in New York after opponents mobilized against Amazon and the politicians who had approved the deal. This month, an attempt to stack the City Council in Seattle, the company’s hometown, with members more acceptable to Amazon backfired with voters.

“These setbacks could be attributed to many factors, but one of them was the influence of labor and immigrant organizations. Now some of those groups are joining together under Athena.”

Coinciding with this is a report, from the Economic Roundtable, a nonprofit research group that focuses on the largely unexplored topic of what Amazon is costing the communities where it has warehouses. The report examines impact on land and air, workers, public subsidies and public oversight and concludes:

“It is time for Amazon to come of age and pay its own way. This means paying its full costs to the communities that host it and the workers who create its profits. Amazon will benefit when its workers have living. Too Big to Govern incomes because they will have the buying power to purchase the products it sells.”

Popular Resistance welcomes this new grassroots movement as we have been reporting on the impact of Amazon on local economies, the wealth divide and the public treasury for years. KZ

What We’re Fighting For

Athena is a new alliance of people who believe that control over our lives, our communities, and our democracy should be in our hands.

Everyone should be able to enjoy the benefits of digital technologies and online commerce without having to sacrifice our rights and liberties, health and planet, or hopes and dreams.

But billionaire corporations like Amazon rig the rules so only they can prosper. They threaten our ability to earn a good living and live a good life.

We are joining together to stop Amazon’s growing, powerful grip over our society and economy. We’re going to write new rules so that our economy puts people first, our public officials ensure that no corporation is above the law or too big to govern — and that our democracy, finally, represents all of us.

Why We’re Taking on Amazon

Corporations like Amazon are dangerous to our communities, our democracy, and our economy. Together, we need to: