Hundreds of worried people filled the gym of an elementary school bordering Detroit and Hamtramck, Michigan. The ones already in their seats were the first to sign their names for the chance to speak. But the sign-up line near the Michigan Department of Environmental Quality table was still growing. It was stretching closer and closer to the door.

At the front of the room, an official took the microphone to apologize. Technical issues meant information couldn’t be provided and they would have to re-work the schedule. “That’s not good enough!” someone yelled from the back of the crowd.

The voice came from the group responsible for the public meeting, the Coalition to Oppose the Expansion of US Ecology, which has been fighting a national hazardous waste processing corporation in the area since 2016.

According to a report in the Detroit Free Press, US Ecology’s Georgia Street location in Detroit has violated EPA regulations 150 times since 2010. Most of these infractions involved wastewater discharge in public sewers, which can damage public water treatment facilities.

Despite the reported violations, US Ecology has been seeking a license to multiply its waste storage capacity to more than 10 times the current space. But the urban environment, public health and the legitimacy of the Michigan Department of Environmental Quality (MDEQ) is already in jeopardy.

A QUESTION OF ENVIRONMENTAL JUSTICE

The issue of wastewater contamination goes all the way back to the environmental movement of the 1960s, when a growing population became suddenly conscious of the devastating effects of industrialized society on public health. But instead of addressing the cause of environmental difficulties, industries further concentrated themselves around poor and working class areas.

Mary Northridge, former editor-in-chief of the American Journal of Public Health, commented on this trend as far back in 1997, when she wrote that the environmental movement had “failed to address charges that poor and minority communities are dumping grounds for environmental hazards.”

Detroit and its suburbs have a fraught relationship when it comes to pollution. When the University of Michigan and the Detroit Free Press listed the most polluted ZIP codes in the state, half the spots on the top-ten list were in Wayne County – with Detroit near its center. US Ecology’s facility began operations in 1974, almost a decade after white flight to the suburbs took off around 1967.

Detroit’s population is 82 percent black and 7 percent Hispanic. The US Census Bureau shows that one in three Detroiters currently live in poverty. As Stateline writer Rebecca Beitsch discovered, environmental racism allegations often die in court, where the burden of proof is complicated without proof of intentionally targeting minority residents.

The coalition’s Diane Weckerle wasn’t looking for something as big as an environmental racism claim against US Ecology, but simply “no radioactive waste, no toxic chemicals, basic health assessment and an environmental justice assessment,” Weckerle said.

“EVERYONE WAS TALKING ABOUT US ECOLOGY”

Beginning around 2015, the administration of Michigan Gov. Rick Snyder was already encouraging the acceptance of Technologically Enhanced Naturally Occurring Radioactive Material, or TENORM, from fracking waste. His endorsement became an occasion to expand the storage capacity of the US Ecology site on Detroit’s Georgia Street.

Various activist groups were all aware of this possibility, and that fall they started working toward building an anti-frack waste protest. “Everyone was talking about US Ecology,” Weckerle recalled.

She helped organize a meeting in Detroit for whoever wanted to oppose the group’s expansion, and that’s how the Coalition to Oppose the Expansion of US Ecology began. “We’re very grassroots,” she said.

At the first public meetings held by MDEQ in 2015, less than 100 people showed up. Since 10,000 people live within a mile of US Ecology, it seemed that a lot of people didn’t know about the controversy. 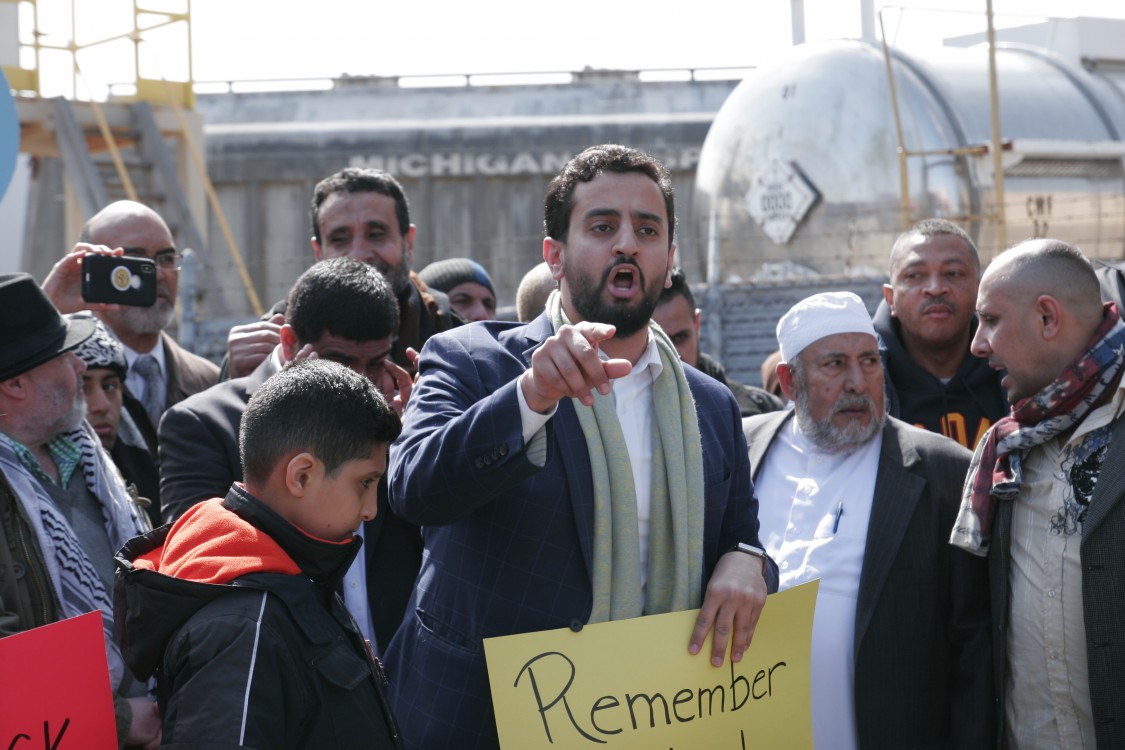 A MATTER OF PUBLIC HEALTH

The facility was waived from groundwater testing in 2004 and soil monitoring in 1990. Both were stopped before US Ecology bought the facility in May 2012, according to an MDEQ fact sheet.

The same fact sheet said the proposed application didn’t present any danger to health or the environment. Subsequent soil testing, however, showed otherwise.

Coalition members sampled soil from around the facility and sent it to the same lab MDEQ used for testing. Michigan Citizens for Water Conservation, another grassroots environmental group, paid the $3,000 bill for the results. “It showed elevated arsenic, lead, diesel,” said Weckerle, who noted that the MDEQ was dismissive of their claims, with one agent telling her: “That’s how it is all over Detroit.”

During a public meeting last month on the issue, one person commented to MDEQ officials that many who live in the area depend on their gardens to grow food because of the severe poverty in the neighborhoods. This means many people may have already been exposed to industrial contaminants.

In the summer of 2018, MDEQ was about to close the case and move on to approving the new storage license. That’s when Nick Leonard, from the Great Lakes Environmental Law Center, brought up the question of a language barrier for some residents.

“Hamtramck is a receiving city,” one person at a public meeting said. The history goes back to when the city was a safe place for German and Italian immigrants. Formerly, Hamtramck was famous for its large Polish-American population.

As Metro Detroit responds to the growing humanitarian crisis around the world, much of the population now comes from countries like Yemen and Bangladesh. It was only by reaching out to include them that MDEQ decided to re-open the public comment period.

At the March 28 public meeting, hundreds of people sat in the gym awaiting their turn to speak, and language difficulties aside, an overwhelming number of residents affected by the toxic waste knew what was happening.

During an interview, Weckerle said she was optimistic that people could find justice. More people and politicians were voicing outrage over US Ecology’s history of violations. And the coalition’s pressure on MDEQ to withhold the expansion’s approval seemed to be gaining traction.

For a large portion of urban America, environmental injustice still has deep roots, with no quick or easy solutions. The disproportionate effect industry and waste disposal continues to have on poor and working class populations is just one small piece of a complex network of issues.

But along the Hamtramck and Detroit border, people are now willing to navigate governmental agencies, public health dangers and even differences among themselves – in many ways opening up a new avenue to confront historic power inequities. And for those engaged in the current struggle, it’s nothing short of a community confronting its past in order to build a better and safer future. 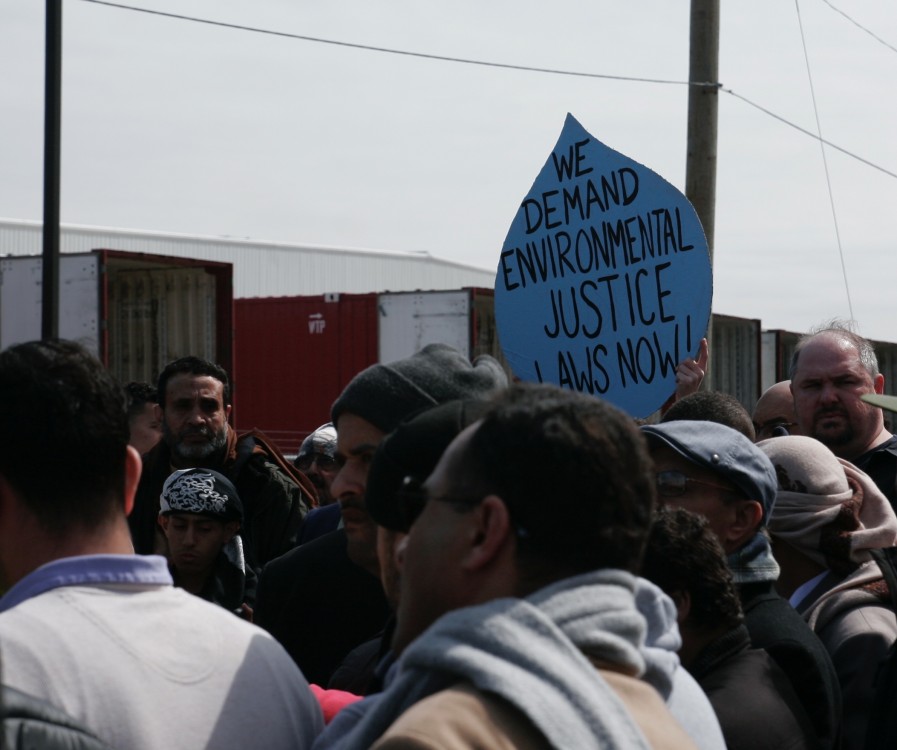