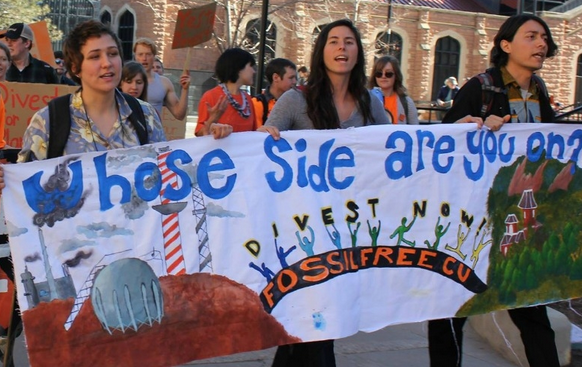 A Kayak For Bill And Melinda

grown as exploded. Over $2.6 trillion has now committed to divestment,

including commitments from venerable institutions such as Stanford University,

the University of Washington, the British Medical Association and the World

Council of Churches. High-profile supporters of divestment include luminaries

Yet, as Naomi Klein pointed out in all 3 of her recent Seattle appearances, while

the momentum behind divestment seems to be only gaining ever more steam,

UN Climate Conference in Paris later this year. The name of the largest

charitable foundation of them all: the Bill and Melinda Gates Foundation.

chance to live a healthy, productive life” – this is a somewhat surprising fact.

Why, after all, would you spend millions on trying to cure malaria while

simultaneously funding companies who plan to create a warmer, wetter world in

is something that our group, Gates Divest, has been raising awareness around

since our public launch back in September.

Since our launch we’ve been outside of the Foundation’s visitor center, with our

signs, flyers and banners, every single day that they’ve been open. Hell, we’ve

opening hours for a quarter of a year. We’ve made a part of the experience of

counter to their mission and their values.

On top of this we’ve now gained the support of over 50 local non-profits, social

Seattle’s 18 candidates for the recent City Council elections. On top of this

we’ve brought bands to the Foundation, marched with choirs and received

support from school groups. But perhaps my favorite action was when we went

On a damp and drizzly Saturday morning, the famous Seattle kayaktivists

Magazine) took to the waters of Lake Washington. Paddling out to the

waterfront of the biggest house in town, over 35 kayaks rafted up together to

heard inside the Gates’ mansion, as chants of “I Say Shell, You say Divest!”

(the Foundation has $5.6 million invested in Shell) rose from the chilly waters,

Yet, despite our efforts we were not invited in for a cup of tea by the Gates.

Furthermore, our efforts continue to only be met with evasive answers on the

question of divestment from both Bill and Melinda.

Which is kind of funny because, in a recent interview in The Atlantic, what Bill

of increased investment in research and development. And… well… that’s

exactly what divestment is all about: Enabling that sort of action.

Before we can see serious political action (such as, say, I don’t know, a carbon

tax) there must first be a cultural shift. This has always been true. Feminism had

to force a cultural shift before they won the right to vote; civil rights activists

had to force a cultural shift before LBJ came to the table; gay rights activists

had to force a cultural shift before they achieved anything like legal equality.

And it is in here that the true power of divestment lies: the power to change

what is culturally acceptable – and thus politically possible.

Unfortunately, Bill and Melinda just don’t seem to quite get that yet.

Gates Divest is a project of 350 Seattle. You can follow their creative and

inspiring actions by liking and following them on Facebook: