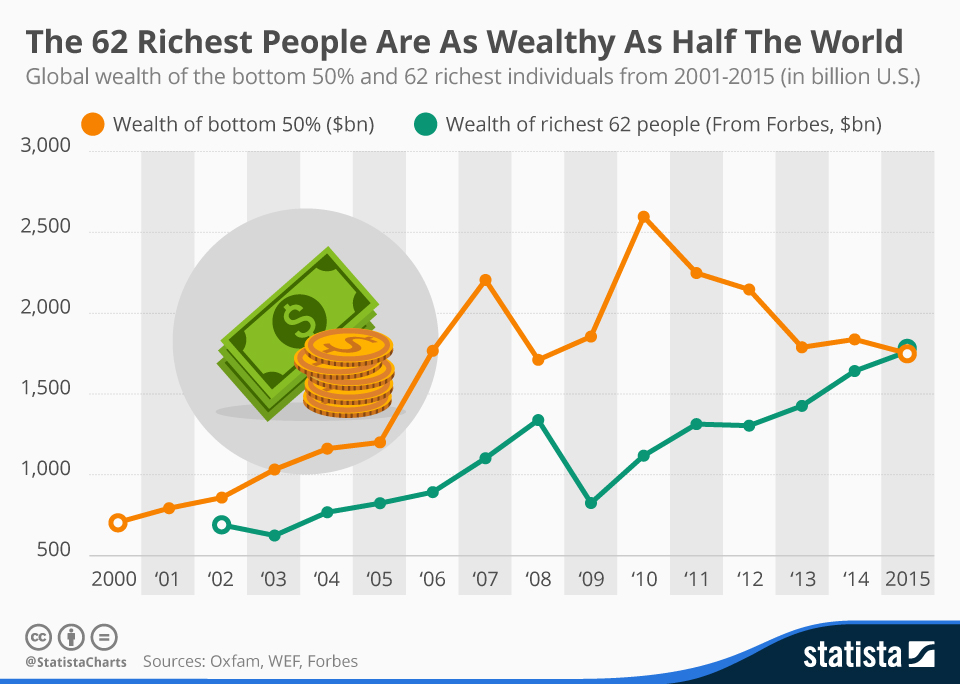 A Legal Precedent For A More Equitable Society

Above: The Wealthiest 62 People equal the wealth of half the world’s population. Image by statista,  DMCA

Billionaires are able to buy and elect our political officials from Senators and Congressmen to school board members. One recent billionaire presidential candidate, Donald Trump, even bragged that he expected to have influence after his political contributions.

The Supreme Court in Citizens United and related cases may have even put its stamp of approval on certain political campaign bribes. The Koch brothers are reported to plan to spend $750 to $800 million on the next election cycle, more than the total expenditures of either the Democratic or Republican parties. Over the last 30 years there has been a transfer of trillions of dollars from the middle class to the top one-tenth of one-percent (0.1%). The top one-tenth of one-percent (0.1%) owns almost as much wealth as the bottom 90%. The 62 richest people have as wealth as half the world’s population.

We have not seen this disparity since the gilded age or perhaps colonial times when five families had land claims along the Virginia – North Carolina boarder 69 miles wide running from the Atlantic to the Mississippi. King George III with the backing of the British parliamentary purloined all the land between the Appalachians and Adirondacks and the Mississippi to redistribute or use as he saw fit. Land at that time was the most respected form of wealth.

We have forgotten, and no longer teach or support, that a very primary reason for the American Revolution, for which blood was shed long before any Declaration of Independence, was based upon class and economic struggles. Attempts to prohibit wide disparities in wealth and power were at the heart of the American Revolution and incorporated in the Documents of the time, the Articles of Confederation, our first national constitution, and most state constitutions. Those ideals were taken from the Articles of Confederation directly into our Constitution of today. They still wait for us to enforce them.

The American Revolution was the first to successfully challenge the 1% of its day, the super wealthy and the powerful. Such aristocrats who survived the revolution, including many who became the Founding Fathers and leaders of the United States, had to accept that the governments of the states and the United States now insisted, using the language commonly understood of the times, that could and did place limits on social, political, legal and economic inequality, power and influence. It is time to enforce these basic constitutional principles to bring about a more just society.

The actions of George III and the British Parliament fomented the American Revolution by encouraging the American leaders of the time to take the reigns of power unto themselves. They used the constant undercurrent of social discontent shown both in North America and in Great Britain for over a century; leading to many riots and the malcontent of the people. Much of the leadership’s support for the American Revolution came from those financially damaged when George III drew a line on the map in 1763 cutting off the colonialists expansion to the west.

Further the Quebec Act passed by the British Parliament in 1774 moved future expansion by the Thirteen Colonies to the West from the Thirteen Colonies to the jurisdiction of Quebec and two other new colonial centers. The Quebec Act cost George Washington and Ben Franklin (along with some rich Englishmen) thousands of acres of land in western Virginia, and threatened their dream of Vandalia Colony in the west. Many influential colonials lost great potential wealth by these actions of King George III.

There was far more wealth lost in these actions than any paltry complaints about taxes. The colonists lost the fruits of the French-Indian war, the clearing of their land titles, at least as far as the Mississippi river. Saddling the Colonists with taxes imposed to help pay for the war merely added salt to the wound. All of the colonial claims west of the ridge line of the Appalachians and Adirondacks to the Mississippi were taken away from them by King George III.

This monumental land grab illustrated the power of politics, place and influence. John Adams even referred to the members of Commons in the British Parliament as part of the nobility. One prime reason that the colonies fought against the French in the French and Indian War was to protect their claims to the western lands. But most of the colonists had no actual legal claim to the land taken away from them, so they had to find some way persuade the common folks, malcontents and rioters to support a revolution, and form a revolutionary army willing to fight and die. The Continental Congress had no money and was down to working with promises. It promised the American people a new egalitarian society where all white men at the time could share in the wealth.

That promises of the Constitution today extends to all citizens regardless of race, religion, sex, ethnicity, or sexual preference, and bars the federal and state governments from supporting personal or corporate inequalities and immunities, and those promises may be found in Article One sections 9 and 10 of the Constitution forbidding the grant of any “Titles of Nobility”. In promoting the adoption of the Constitution of the United States of America, Alexander Hamilton named these Article One clauses the “Cornerstone of Republican Government“. He went on to observe that as long as “titles of nobility” were excluded, there could never be a serious danger that the government will be any other than that of the people. “Titles of Nobility” were terms familiar in the language of the times indicating social and economic superiority and political power.

We know they were clauses related directly to the revolution. While the Declaration of Independence written by a small committee, the Article of Confederation was proposed by committee members from all thirteen colonies formed at the same time and was written to join the colonies in the revolution and a new government, even if independence was not declared. In their original draft of the Articles of Confederation, prepared in June, 1776 by the hand of John Dickinson, confirmed by the equivocal notes of Joseph Bartlet, referred to the colonies as “colonies”, not as independent states. Dickinson opposed independence, though he supported the revolution and fought during the war. But he left the Continental Congress before the vote for independence. There is ample precedent for finding equality in these words.

The Nobility restrictions referred to equality. In the words of the early Constitutional Scholar, Joseph Story, born towards the end of the Revolution (1779) and a member of the Supreme Court from 1811 to 1845, that as perfect equality is the basis of all our institutions, state and national, the prohibition against the creation of any title of nobility seems proper, if not indispensable, to keep perpetually alive a just sense of this important truth.

These clauses are examined in far more detail in The Cornerstone Brief and Secrets of the Forgotten American Revolution. It is suggest that we now reexamine these words of social, political and economic equality as practical goals for our society required by our fundamental principles, and laws. Recognizing that we have far strayed from these principals, it is now time to face our inequities and start the tasks of a new reformation or revival.

All references can be found in The Cornerstone Brief and Secrets of he Forgotten American Revolution. Available on Amazon and CreateSpace eStore .