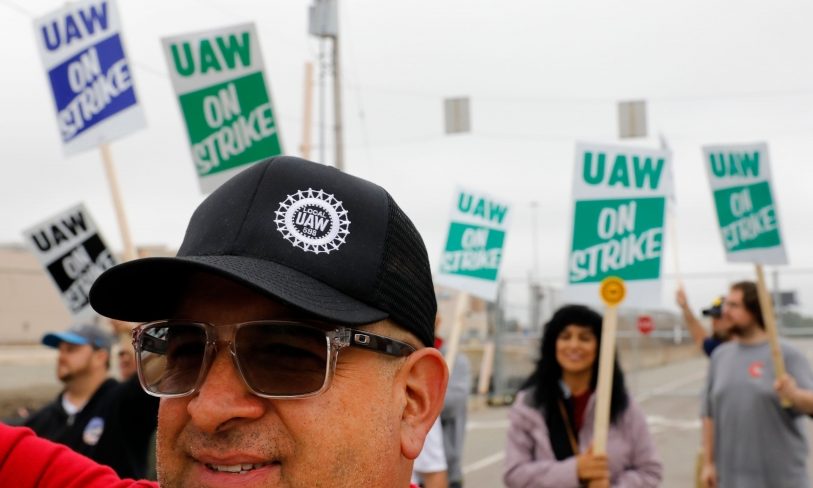 Above photo: David Garcia, a United Auto Workers (UAW) member who is employed at the General Motors Co. Flint Assembly plant in Flint, Michigan, pickets outside of the plant as they strike on September 16, 2019. Jeff Kowalsky/AFP/Getty Images.

GM Fairfax worker speaks out on spread of COVID-19.

The World Socialist Web Site recently spoke with a worker at the General Motors Fairfax Assembly Plant in Kansas City, Kansas, about conditions at the facility that are leading to the spread of the deadly COVID-19 disease.

Last week saw the highest number of new recorded cases for the Kansas City metro area since the start of the pandemic. The ever-increasing level of confirmed cases takes place as infection levels are soaring across both Kansas and Missouri, which have been recording record-breaking highs on a near-daily basis.

The GM Fairfax Assembly Plant is a sprawling 4,900,000-square-foot facility located in the Fairfax Industrial District along the Missouri River. Beginning production in 1988, on the grounds of the former Fairfax Airport, the plant now employees 2,385 workers in the production of the Chevrolet Malibu and Cadillac XT4 models.

Following the two-month shutdown of the auto industry forced by workers through a series of wildcat strikes earlier this year, production at the Fairfax Plant officially resumed on June 1, with the reinstitution of two full-time shifts. A third shift at the plant was previously cut and roughly 1,000 laid off in 2017, with the company’s move encountering no opposition from the United Auto Workers.

Prior to restarting production this summer, GM and the UAW trumpeted safety protocols such as hand washing, sanitizing, temperature screening and physical distancing, claiming they were adequate to protect workers from infection. All of these would-be preventative measures have amounted to little more than empty talk as demonstrated by the expanding outbreaks of infections across the auto industry since its reopening.

Following the June 1 restart of the Fairfax plant, a GM spokesman was forced to release a statement acknowledging that an employee at the plant had tested positive for COVID-19 on June 11. In the statement, GM claimed that the employee was infected outside work, while providing no evidence to support this claim.

“They always say it’s outside of work,” commented Sam, a Fairfax worker, in response to the GM statement (Sam’s real name has not been used as protection against retaliation). Asked if he thought that was the only case at the plant since reopening, he said, “I have a hard time buying that. I’ve heard of a lot more than one person who had COVID.”

The worker continued, “I heard someone had the COVID who works near the main door, the main entrance. Someone who was in the Cleanroom. Someone else on the Tech Team, and they’re all over, they go to several areas in the plant throughout the day.” He noted the high volume of workers calling off work every day. “What happens to those that were around that person? If they were exposed why weren’t they quarantined?”

“I think they’re trying to hide as much as they can, and the true impact on the plant. I believe the UAW and GM are in cahoots with each other. There’s no doubt in my mind. Both sides are withholding the truth.”

The cleaning and safety protocols that GM has outlined publicly have largely been ignored inside the plant. “The only thing I know of is that they’re cleaning the bathrooms more frequently. Cleaning ladies wiping down the rails. But that’s about all I see.” He added, “We’re given an additional five minutes to disinfect our work area before the line starts. They give us a spray bottle of something, we don’t know what it is. But now management is starting to complain that it’s damaging the equiptment and surfaces.”

“People are wearing masks, social distancing, but it’s getting worse because you really can’t distance, there’s a lot of jobs side-by-side where it’s impossible to control. People on the line are working two to three feet from each other, you’re right on top of each other sometimes.”

Commenting on the temperature in the plant, he recalled, “Prior to the July shutdown, they did cool some areas down. But since we returned it’s been hot. It was hot enough I was glazing in sweat.” He added, “One of the complaints for me is when you wear safety glasses and the mask, it causes the glasses to fog up, and makes it a lot harder to see. They said to rub some Joy [dish soap] on it, which helped a little bit, but not that much and you end up with soap on your face.”

Another factor he found seriously concerning was the potential for the transmission through the environmental system. “I think no matter what you do, whether manufacturing or in the schools, the heating and ventilation systems are going to spread it. If the virus gets in that system, it’s going to blow it right on you.”

Prior to the pandemic, GM laid off a number of temporary workers before they were to become full-time, Sam said. Such actions render all but meaningless the so-called “pathway” to full-time employment touted by the UAW in the 2019 national contract. “They had a lot of temp workers who were waiting to become permanent, and GM let them all go.” Since then, many of the temps hired to fill in the gaps from absenteeism have quit. “I was told there were about 170 people hired, and after a few days, there were just about 50 people left. It’s very demanding work. The turnaround is huge.”

There is an immense danger that workers may be unknowingly infected on the job and not yet showing symptoms. “A lot of people are very concerned for their families, or their children—afraid of giving it to their grandpas or grandmas, bringing the COVID home and infecting their loved ones.” He added, “We know there is no cure for it, and without a cure, that puts a lot of lives in jeopardy. That’s a lot of lives to put at risk. At what point do lives matter?”

Voicing concerns to management or the UAW or raising safety issues have time and again proved to be a dead end for workers at the plant. The UAW safety reps “don’t do anything,” he said. “They always have some kind of stupid story to help GM out.

“I see retaliation in this plant, I see the union working together with management and people are recognizing that.”

Faced with the intransigent refusal of management and the union to ensure safety, workers at Detroit-area Fiat Chrysler plants and the Ford Dearborn Truck plant have established rank-and-file safety committees independent of the UAW and management to fight for a healthy and safe workplace. These committees have demanded full disclosure of COVID-19 cases; for production to be halted for cleaning when infections occur; and regular, universal testing.

Asked what he thought about workers organizing independently, Sam responded, “We don’t feel like the UAW protects us anymore. We feel like we’re sold out. A lot of people are very angry. The world is changing, and we need to change too.

“We’re starting to break down and get tired of it. It’s just a matter of time before we organize and go after what’s right. That’s where our power is, in numbers.”