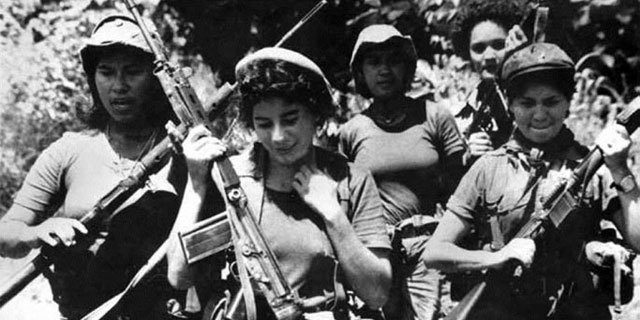 A Meeting With Historical Combatants

A few days ago I had the honor of participating in a meeting of historical combatants of the Southern Front, in a community in the department of Rivas. There is so much to tell that the words fail me and my heart trembles.

But really, slipping through the crowd at a meeting of historical fighters anywhere in Nicaragua, one makes a deep journey into the open veins of the people of Nicaragua and Our America. Because in Nicaragua even under the stones you find history, heroism, conviction and faith that the world can be a better place and that it is possible to change society with the strength of everyone. But it is not just faith, it is concrete experiences of struggle for life and genuine peace.

The heat was exhausting and the field was covered with an intense green. The children played freely climbing up and down some leafy tigüilote trees, their laughter seemed a proclamation of those dreams and visions of those who fell in combat there in days gone by. That peasant community and that field that iss now a baseball field for the enjoyment and recreation of the families 43 years ago was a field hospital for the combatants of the Southern Front.

While the agenda of the event was advancing, there in the periphery an old peasant woman approached, hunched over, with simple clothes, white hair and dusty slippers. Her plain rustic face and the firmness of her gaze made me think “she must be some great historian”. The lady did not say anything, she only observed the whole event, almost without gestures, at the end while everyone was hugging each other some women insisted: “Come on Teresita, come closer, you are among the most historical, you were one of the very first”.

Hearing that, the old lady half turned her eyes and gave them a shy smile. I watched her and I wanted to reach out to her, I wanted to interview her, but I stopped, that old lady went off with her cane, walking softly, with a look of pride and in silence, I wanted to respect her moment. People are very heroic, they do not seek recognition or individual relevance, they always continue working for the common good and recognize “the other”, “the others” and the collective.

As she advanced, others said goodbye, leaving on foot, getting on their bicycles, motorcycles or into the back of pickup trucks. At any moment you could hear bits and pieces of conversations like “you saw so-and-so and you thought we were going to take a break…”, “it’s because imperialism doesn’t let us”, “all the families here have put in their grain of sand”. While I was listening to them, I felt – I thought – that all too often this is what is not understood outside of Nicaragua.

The Revolution in Nicaragua was and is popular, it was and is from below, it was and is of the people. It is the daughter of the sacrifice of the humble people who gave up their lives and youth to see a Nicaragua different from the one they knew, of the people who have nothing to lose, but everything to gain. Of the mothers of Heroes and Martyrs, of the historical combatants, of the war wounded, of the common and ordinary people, of the neighborhoods, communities and popular sectors, those who are not easily deceived because their memories are fresh, imbued with common sense and authentic intelligence.

Despite the efforts of individuals who use their revolutionary past to confuse and distort the reality in Nicaragua, those people who became famous or well known thanks to the People’s Revolution. They are figures who gave up their connection with the people and allied themselves with imperial interests for their own personal ambition, and they hope to project themselves overseas base don their Sandinista past because in Nicaragua no one pays them any mind. And this is because as the popular saying goes, a small town makes an ample hell, because here everybody knows everyone else and knows who is who. People have known those false individuals for a long time.

The worst thing is that many times this pro-imperialist and self-centered narrative is echoed by a neoliberal and well-to-do Left, a Left of bookshops and cafés and comforts who go here and there seeking a revolutionary Garden of Eden and when real life political processes face the many setbacks and contradictions typical of class struggles, they rend their garments in frustration. People whose rhetoric is super-revolutionary, but when faced with the demands, the harshness, the complexity of the practice of social change never show the least capacity for self-criticism, sacrifice or willingness to listen to the opinion of those sectors of the people advancing with their own efforts, on foot, bicycle, motorcycles or whatever means they may have, but in silence.

Or people too who accompany that advance, being supportive, without imposing. The are very different to those who eloquently tell us what we should do, and when they tell us this really are crushing and transgressing what international solidarity means and forgetting that no one should seek to be prophets in a foreign land but rather should try and solve their own problems in their own countries. Such people also forget that Nicaragua’s brave people is full of anonymous heroes well versed in the art of resistance, who expect and deserve simple respect as they continue to show by example that a better world is indeed possible.

Here in Nicaragua, we are living through not just an electoral moment but a moment for reinventing hope out of our reality, our experiences and history. In Nicaragua, families continue to contribute their grains of sand, sweat, effort and collective work to build a better Nicaragua. Here you will find looks of pride among the common people because they have done and continue to do what needs to be done. People know that historical healing is collective and not individual, it is a process of working daily and hard for true peace, which is the vocation of Nicaragua’s people.