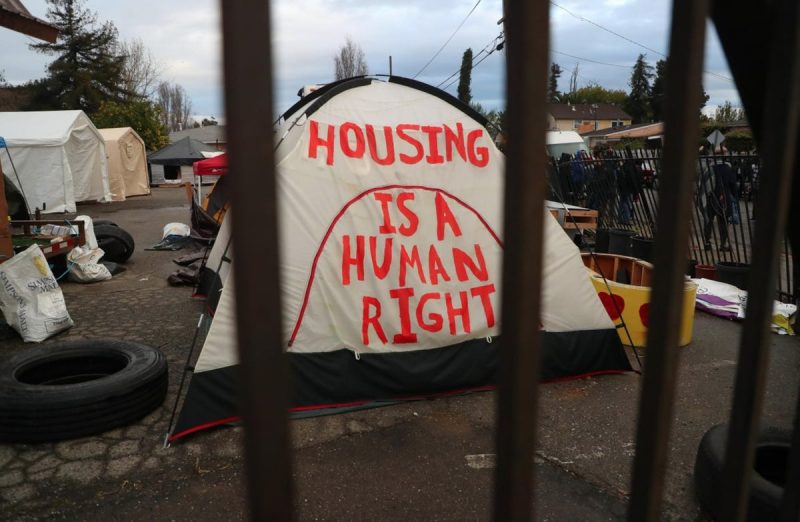 A New Campaign Fights To Stop The Criminalization Of Poverty

The effort is targeting laws that criminalize activities engaged in by people experiencing homelessness and encouraging an increase in affordable housing.

Anew campaign, Housing Not Handcuffs, is attempting to stop the criminalization of homelessness and poverty in the United States. Led by the National Homelessness Law Center, the effort builds on research the Law Center has been conducting since 2006.

The Law Center’s latest report, issued in late November, tracks laws in all fifty states—plus Washington, D.C.—that make it a criminal offense to sleep, lie down, ask for money, loiter, erect a tent, put down a bedroll, “loaf,” or feed unhoused people in public.

This extreme stance to remove the homeless from public sight is just one of many punitive policies that limit what the unhoused can do and where they can do it.

“Commensurate with the increase in homelessness, states and municipalities have increasingly enacted laws criminalizing activities engaged in largely by people experiencing homelessness and housing insecurity,” the report concludes.

Between 2006 and 2019, statewide bans on camping in public increased by 92 percent, panhandling and loitering by 103 percent, and living in vehicles by 213 percent. A conviction for these “offenses” can lead to both misdemeanor and felony charges and result in incarceration, fines, or both.

Eric Tars, legal director at the Law Center, notes that most of the measures that have been enacted have been passed at the local level, and in both liberal and conservative areas. But, he tells The Progressive, an emerging trend in states with Republican governors has been to penalize cities with less punitive policies.

For example, Tars reports that, in 2019, officials in Austin, Texas, modified the city’s ban on panhandling, camping, and lying down in public. This effort prompted Republican Governor Greg Abbott to champion an effort—which passed the state legislature and took effect on September 1—to deny state funding to communities that refuse to disallow these activities, basically forcing them to restrict what housing activists call “existing in public while unhoused.”

But this extreme stance to remove the homeless from public sight is just one of many punitive policies that limit what the unhoused can do and where they can do it.

New Hampshire, for one, has made sleeping in public completely illegal; Idaho, Mississippi, and South Carolina make it a crime only if one sleeps outside near a state capitol. Wisconsin, however, takes a different approach: According to the Housing Not Handcuffs report, “any person with the physical ability to work, who is without gainful means of support and does not seek employment is considered a ‘vagrant,’ ” a class C misdemeanor.

In addition, the report emphasizes that many policies are intentionally vague, allowing law enforcement wide discretion in determining which behaviors to punish.  Oklahoma, for example, makes it unlawful to “loiter in or upon any automobile or motor vehicle.” Similar statutes have been passed in Hawaii, South Carolina, and South Dakota. Not surprisingly, people of color are arrested at higher rates than their white peers.

Besides laws that seek to criminalize homelessness, many states and cities enforce “status offenses”—rules that criminalize behaviors for minors that are legal for adults, including running away from home with no intent to return, school truancy, or curfew violations.

The Build Back Better Act will provide needed funds for the repair of public housing units that have been deemed uninhabitable, increase the number of available vouchers, and create new or renovated supportive-housing units.

“These policies give law enforcement additional reasons to engage with homeless youth and do nothing to protect them,” Tars says. “If a kid is sleeping outside, it’s because they have no family or friends to go to. Arrest will most likely drive them away from systems that might assist them, including schools which can be a source of stability, where they can get one or two meals a day, take a shower, do laundry, and find support and counseling.”

Tars continues, “The idea that they should be arrested comes from a paternalistic notion that the family home is always the best place for children, and ignores the realities of abuse and neglect.”

These policies can also prolong homelessness and undermine efforts to become self-supporting. As the National Alliance to End Homelessness reports, having an arrest record can make it difficult to secure employment, housing, school loans, and other resources.

“Criminalization policies waste limited state and local resources,” the National Alliance website states. “Rather than addressing the causes of homelessness and helping people escape life on the streets, criminalization creates a costly revolving door that circulates individuals experiencing homelessness from the streets to the criminal justice system and back.”

Longtime activist and advocate Pat LaMarche, author of a four-volume children’s book series about homelessness, agrees. “Criminalization is cruel and only meets the needs of those who do not want to see people asking for money or pitching a tent on the street,” she says. “It also rests on stereotypes, that the unhoused are lazy freeloaders who want to milk the system. Maybe it gives people who have homes comfort, preserving the delusion that since they are not lazy, homelessness can’t happen to them.”

Similarly, filmmaker and writer Diane Nilan, president and founder of HEAR Us Inc, an organization that produces media about youth and family homelessness, says “it’s absurd for lawmakers to try to legislate homelessness away without actually doing anything to help people.”

The solution, housing justice activists say, is to stop criminalizing people and, instead, increase the supply of affordable housing.

In fact, the Law Center’s research found that, between 2001 and 2019, 12.8 percent of the nation’s supply of affordable housing was lost, including 10,000 units of federally subsidized housing per year.

Reversing this, Tars says, has several upsides. Not only does it get unhoused folks off the streets, but it also saves money. Research conducted in Charlotte, North Carolina, found that the city saved $2.4 million a year after creating a Housing First facility—providing shelter without demanding that residents find work, attend sobriety meetings, or obtain medical or psychiatric care as a condition of occupancy.

This finding has led to several federal efforts to steer away from criminalization and create supportive housing for low-income people. One effort is the pending Housing is a Human Right Act, which was introduced in June by U.S. Representatives Pramila Jayapal, Democrat of Washington, and Grace Meng, Democrat of New York.

In addition, the Build Back Better Act, as passed by the House, will provide needed funds for the repair of public housing units that have been deemed uninhabitable, increase the number of available vouchers, and create new or renovated supportive-housing units. The act is awaiting Senate action.

“If we can get BBB through the Senate, it will be the biggest step taken in decades to do something about housing instability,” Tars tells The Progressive. “It won’t fully remedy the crisis, but conversations are happening at a level I have not seen before. People are remembering that homelessness did not always look like it does today. Before the ‘Reagan revolution’ removed our imperfect safety net, we did not have massive numbers of homeless elderly or homeless families.”

Tars concludes, “It’s been a deliberate misdirect to blame poor people for their situation and then create arrest measures that elongate their homelessness.”