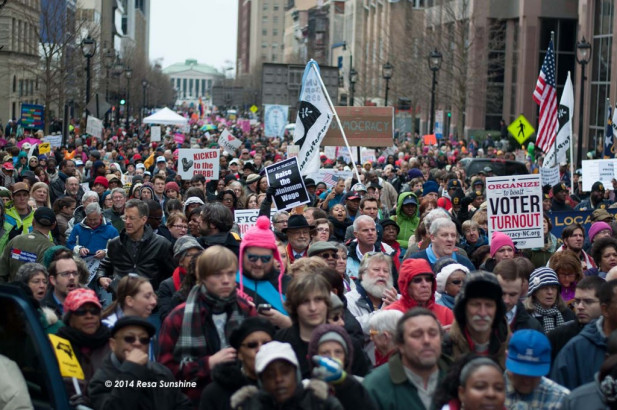 The Rev Dr William Barber is a leader of this campaign as part of the effort he is touring the country to bring about a “moral revival across the US.” The Poor People’s Campaign builds on the work that Rev. Dr. Martin Luther King, Jr. was engaged in when he was assassinated.

The Guardian reports the campaign seeks “to unite the disenfranchised groups in the US – across the spectrums of race and sexuality – under a common cause.”  Barber notes the Poor People’s Campaign of the King era sought to bring people “together to address the evils of racism, militarism, systemic poverty and ecological devastation.” The campaign is not built around partisan politics but around moral values and seeks to create a new moral narrative.

The Poor People’s Campaign hopes to sign up 1,000 people in 25 states and DC for a season of civil disobedience in the spring of next year and Barber is traveling the country to build it. Sign-up here. In Spring 2018, people will stage sit-ins at state capitols and in the US Congress advocating a “moral agenda” encompassing issues from LGBTQ and voting rights to immigration reform and access to healthcare and more.  KZ and MF

The Poor People’s Campaign: A National Call for Moral Revival has emerged from more than a decade of work by grassroots community and religious leaders, organizations and movements fighting to end systemic racism, poverty, militarism, environmental destruction & related injustices and to build a just, sustainable and participatory society. The Campaign aims to build a broad and deep national moral movement — rooted in the leadership of poor people and reflecting the great moral teachings — to unite our country from the bottom up.

For years we have seen a kind of attention violence towards issues of systemic racism, poverty, and militarism. There was a time when our nation was fighting a war against poverty; now it seems we are waging a war on the poor. Our social fabric is stretched thin by widening income inequality while politicians criminalize the poor, fan the flames of racism and xenophobia to divide the poor, and steal from the poor to give tax breaks to our richest neighbors and budget increases to a bloated military.

The twin forces of white supremacy and unchecked corporate greed continue to gain more power and influence, both in statehouses across this nation and at the highest levels of our federal government. Today, one in every two Americans are poor or low-income while millions of children and adults continue to live without access to healthcare, housing, clean water, or good jobs.

At the same time, the issues of poverty and racism have been forced to the margins of our moral narrative and claims that a limited focus on personal morality should overshadow and supplant a commitment to public morality rooted in a critique of greed, racism, and injustice.

The Poor People’s Campaign: A National Call for Moral Revival will strategically connect and grow different struggles and lift up and deepen the leadership of those most affected to transform the political, economic and moral structures of our society. The Campaign will push forward concrete demands, build unity across lines of division, and draw on art, music, and religious traditions to challenge the dominant narrative that blames poor people for poverty.

The Poor People’s Campaign: A National Call for Moral Revival will necessarily be a multi-year undertaking. The Summer of 2017 through the Spring of 2018 will be used as the public launching of the Campaign. By engaging in highly publicized civil disobedience and direct action over a 6-week period in at least 25 states and the District of Columbia during the Spring of 2018, the Campaign will force a serious national examination of the enmeshed evils of systemic racism, poverty, militarism and environmental devastation during a key election year while strengthening and connecting informed and committed grassroots leadership in every state, increasing their power to continue this fight long after June 2018.

At such a time as this, we need a new Poor People’s Campaign for Moral Revival to help us become the nation we’ve not yet been.