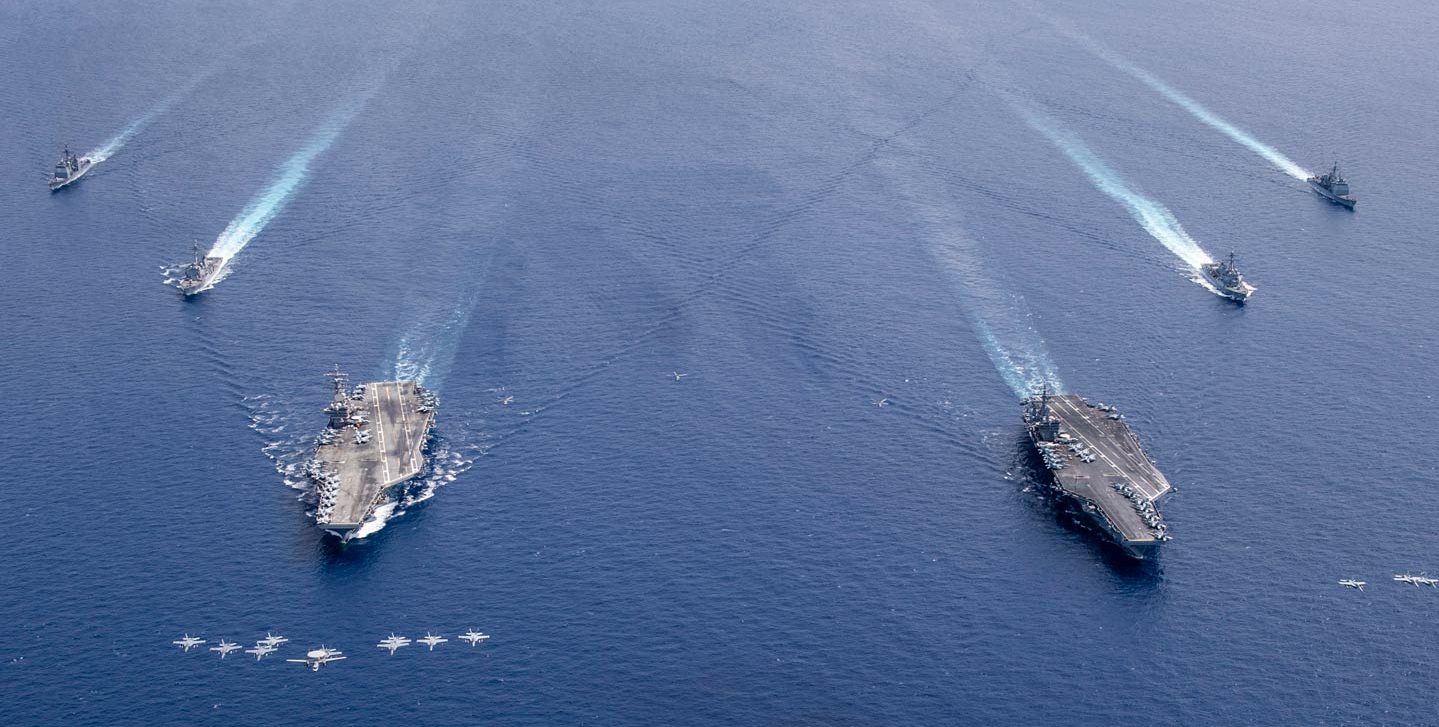 A New Tonkin Gulf Incident In The Making?

Halt the rush to war in the Pacific.

While the American public, the media, and Congress have largely been focused on the Covid pandemic, demands for racial justice, and other domestic concerns in recent months, the US military has been mobilizing all of its capabilities for a massive show of force in waters abutting China. Every Pacific-based US submarine is now deployed in the area; two nuclear-powered carriers and their escort ships are conducting naval maneuvers there; the Air Force has sent B-1 bombers overhead; and the Army is practicing to seize Chinese-claimed islands.

In the most provocative of these efforts, the carriers Nimitz and Ronald Reagan, accompanied by several cruisers and destroyers, have sailed into the South China Sea—an extension of the Pacific that abuts China, Vietnam, Malaysia, Indonesia, and the Philippines and encompasses several clusters of islands claimed in their entirety by China and in part by the others. The Chinese have installed military facilities on some of the islands, a move said by US officials to violate international law.

In recent months, the Navy has deployed missile-armed destroyers on “freedom of navigation operations” in waters surrounding the Chinese-occupied islands, prompting Beijing to send ships of its own to escort American warships out of the area. Until now, these operations have been limited to probes and taunts, intended to demonstrate Washington’s rejection of China’s claims to the islands and its emplacement of military facilities upon them. Its more recent activities, however, suggest something more sinister and dangerous—an intent to reverse China’s occupation of the islands by military force.

Consider this: On three separate occasions this spring, the Air Force sent B-1B supersonic bombers on long-range demonstration flights over the South China Sea, in some cases deploying them from bases in the United States. (Originally intended as a nuclear delivery system, the B-1B has been converted into a multipurpose bomber capable of carrying large numbers of bombs and missiles.) Even more ominously, on June 30, some 350 paratroopers from the 25th Infantry Division in Alaska flew across the Pacific and conducted a mock “forcible entry jump” to secure an air base on the island of Guam, presumably for use by following waves of American soldiers; the only conceivable real-world targets for such an operation are those Chinese-occupied islands in the South China Sea.

By far the greatest demonstration of Washington’s war-making capacity, however, is the multi-carrier operation now under way. With each carrier capable of launching 60-plus warplanes, and their accompanying vessels armed with multiple Tomahawk land-attack cruise missiles, the combined force poses a massive threat to China. As noted by RAdm. James Kirk, commander of the Nimitz strike group, “Our operations demonstrate the resilience and readiness of our naval force and are a powerful message of our commitment to regional security and stability as we protect critically important rights, freedoms, and lawful uses of the sea.”

For China’s leaders, especially President Xi Jinping, this represents both a crude dismissal of China’s ability to defend itself and a harsh repudiation of its claim to having achieved “great power” status—something that can only produce immense anger and dismay. How Beijing will respond to this is unclear, but it is obvious that the leadership must evince some muscularity in response to such taunts or lose credibility in the eyes of China’s increasingly nationalistic population.

The official website of China’s People’s Liberation Army (PLA) observed that “by massing these aircraft carriers, the US is attempting to demonstrate to the whole region and even the world that it remains the most powerful naval force.” In response, it suggested, the PLA could hold major drills of its own, possibly including the use of “aircraft carrier killer weapons like the DF-21D and DF-26 anti-ship ballistic missiles.”

With the PLA Navy also holding maneuvers in the South China Sea at this time, it is not hard to imagine how close encounters between US and Chinese warships could result in an accidental or ambiguous event, precipitating an armed incident and full-scale escalation. (Given that some of the recent encounters have occurred near the mouth of the Gulf of Tonkin, it is not hard to think back to the infamous “Tonkin Gulf Incident” of August 24, 1964, when US destroyers deployed off North Vietnam reported radar tracks of enemy torpedoes—an action, later deemed to be illusory, that President Lyndon Johnson seized upon to secure congressional support for full-scale US intervention in Vietnam.

Is the Trump administration actively seeking such an incident to divert attention from its failures at home? Is the Pentagon itself hoping to provoke China to justify the forcible expulsion of Chinese forces from those islands in the South China Sea? Without access to secret communications, it is impossible to answer one way or another. What can be said is that the US military is proceeding down an extremely dangerous path, and one very likely to lead to miscalculation and war—even nuclear war. It is essential, then, that members of Congress call on senior Pentagon leaders to withdraw the Nimitz and Ronald Reagan from the South China Sea and begin talks with their Chinese counterparts on steps to reduce the risk of conflict there.

Michael T. Klare, The Nation’s defense correspondent, is professor emeritus of peace and world-security studies at Hampshire College and senior visiting fellow at the Arms Control Association in Washington, DC. Most recently, he is the author of All Hell Breaking Loose: The Pentagon’s Perspective on Climate Change.