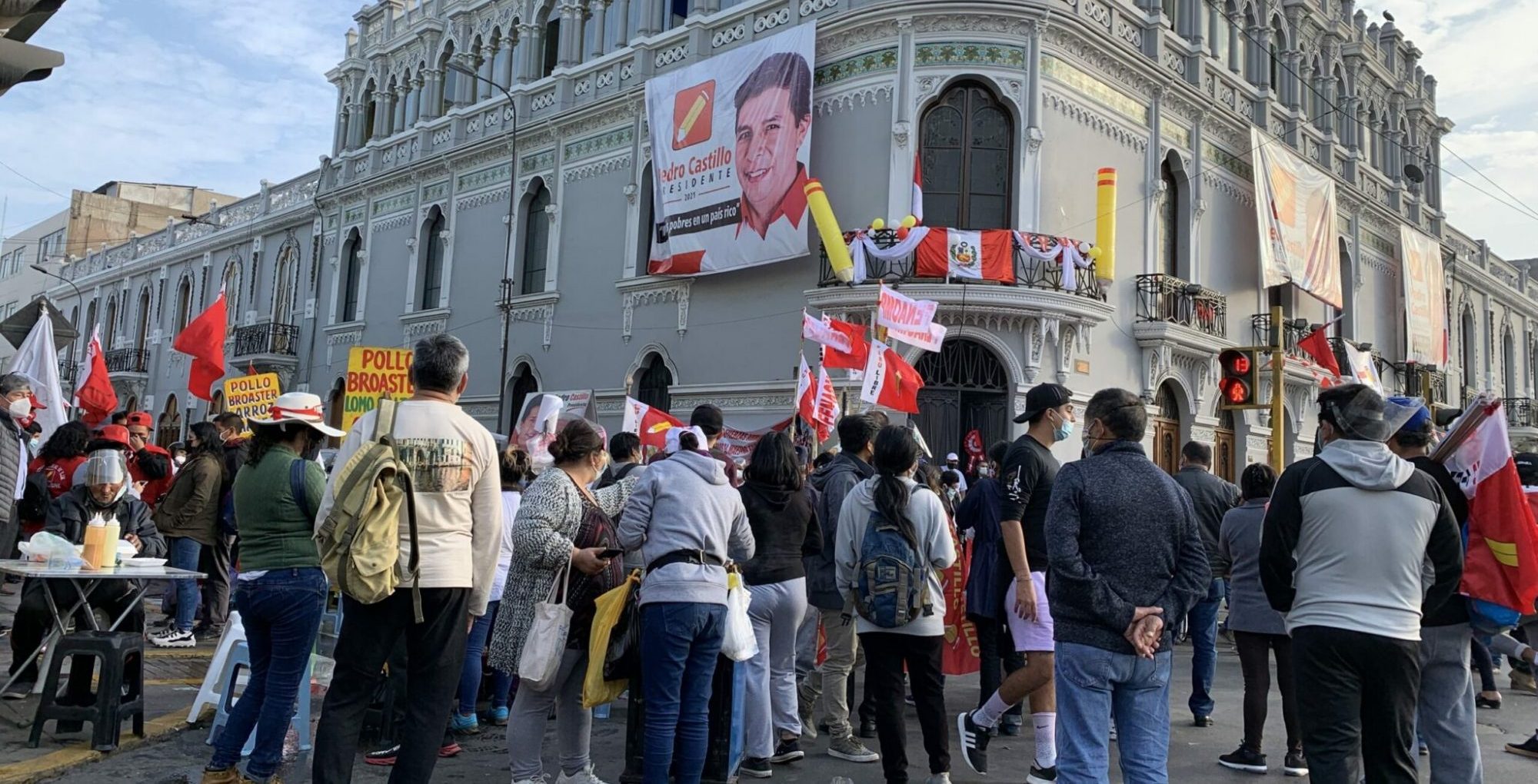 And The Right Can’t Handle It.

Castillo is at the forefront of a ‘pink tide’ rolling over Latin America.

On the ground in Lima, the cloud of political uncertainty remains so thick it can be difficult to grasp the basic facts about this election and its historic importance for the people of Peru.

The election of peasant-teacher Pedro Castillo from the Perú Libre (Free Peru) party as the new Peruvian president on 6 June was a victory for the country’s popular forces – an outcome almost impossible to imagine even just a few months ago. Castillo’s win has seen Keiko Fujimori, the daughter of former Peruvian neoliberal dictator Alberto Fujimori, lose the presidential race for the third time in ten years – and to a coalition of rural peasants, the urban working classes, Indigenous communities from the Andes to the Amazon, and leftists of all stripes.

It is now mathematically certain that Castillo won the most votes in last week’s election. Pending the certification of the electoral authorities, the former teacher and his allies across the Peruvian left will embark on an ambitious programme of national transformation, with two central pillars: redrafting the Fujimori-era constitution, and realising the campaign’s now-famous slogan: “No más pobres en un país rico” (“no more poor people in a rich country”).

But while Fujimori and her supporters may have lost the final vote count, they haven’t accepted defeat. In the face of a 50,000-vote shortfall, their strategy has been to attempt to nullify hundreds of thousands of already counted Castillo-leaning votes — a scandalous attempt to disenfranchise the Peruvian people after their votes have been cast and counted.

Any and all excuses were deployed by Lima’s top law firms to cancel votes en masse: slight shifts in the angle of signatures, the most minor of clerical errors, and racist anti-Indigenous claims of fraud in precincts with recurring, common last names. In parallel, coalitions of rightwing politicians from across Latin America provided political cover for this disgraceful, retroactive election theft. But fortunately, after sustained street demonstrations, vigilant international pressure, and validation from a wide range of electoral observer delegations, the electoral authorities refused to hear most of these challenges, thus closing the door on Fujimori’s pursuit of both the democratic and anti-democratic roads to power.

Fujimori’s third and likely final move, before her own preventative imprisonment and corruption trials begin, is a strategy of delegitimisation and delay. Daily street marches in Lima, complete with both Peruvian national imagery and Spanish imperial flags from centuries past, along with constant media attention, decry an invented ‘fraud at the voting table’ by mysterious, veiled, and supposedly ‘communist’ forces. Respected Nobel Prize winner Mario Vargas Llosa went on national television to warn against the recognition of Castillo’s victory and the power of the peasantry as “chaos for city people”. And the legal challenges continue too.

While Fujimori may have little hope of changing any outcome, it may yet be possible to try to provoke a constitutional crisis if Castillo is not recognised by the time of inauguration day — the very same strategy pursued by Donald Trump earlier this year.

Assuming these efforts are doomed to failure, especially after the armed forces issued official statements promising non-intervention, her machinations now advance a new objective: cast doubt over Castillo’s legitimacy. The more she can weaken his mandate in the court of public opinion through endless lawsuits, rallies, and manufactured doubt, the easier he will be to oust via parliamentary or judicial coup — not a rare occurrence in Latin America. And all the while, Fujimori reframes herself not as a three-time losing candidate under criminal indictment, but as a martyr stoically marching to prison in a last stand against an ascendant left. Both serve to weaken Castillo’s mandate and blunt the real story of a new ‘pink tide’ rolling over Latin America. She may not win, but she can torpedo Castillo’s project by exacting maximum friction and doubt, which is enough for capital and the ruling class (who play a patient long game).

Ordinary Peruvians are vigorously standing up to Fujimori’s attacks, however. Report after report is showing that voters reject Fujimori’s claims of signature forgery and fraud, speaking out against the false accusations against them. Progressive social forces – including the formidable autonomous peasant organisations of the Central Única Nacional de Rondas Campesinas del Perú (CUNARC-P) – are mobilising in the streets, demanding Peru’s institutions respect their vote while forging a common front against any possible coup attempt. In the wake of last year’s parliamentary coup against former president Martín Vizcarra, the people have already demonstrated their ability to successfully confront abuses of power.

As leftists outside Peru, we must stand in solidarity with the people’s struggle to realise their democratic will against a vicious ruling class that will not easily cede centre stage. But even after Castillo takes up residence in the Palacio del Gobierno in July, we must keep up our support. Time and time again across Latin America, reactionaries have been undaunted in the drive for power. From Dilma Rousseff in Brazil, to Rafael Correa in Ecuador, to Manuel Zelaya in Honduras, to Evo Morales in Bolivia, an internationally coordinated right has honed its tactics in lawfare to decapitate popular movements and their elected leaders. Time after time we have watched the havoc they have wrought. They are certainly trying again in Peru.

If Pedro Castillo, Perú Libre and the brave alliance of popular forces are to structurally change Peru, the presidency will not be enough. In Peru, mass social mobilisation and international support will be vital. Elsewhere, we must herald the people’s triumphs, defend their victories, sound the alarm when necessary – and yes, criticise appropriately too. But we mustn’t look away.

The Nicaraguan poet Gioconda Belli wrote: “La solidaridad es la ternura de los pueblos” (solidarity is the tenderness of the people). Beset by myriad forces of reaction, both the tenderness and the tenacity of our solidarity will be vital as the Peruvian left finds its legs in power.