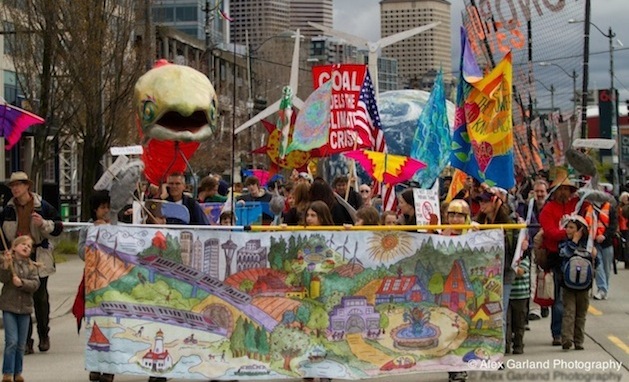 A Positive Vision For What The Green New Deal Could Be

We interviewed Dahr Jamail about his new book, “The End of Ice,” for our podcast, Clearing the FOG, this week. It will be available Monday. Jamail describes the grim reality of human-caused climate distortion. The bottom line is: It is here. It is accelerating. We need to take swift action to attempt to mitigate it and adapt to it as best we can.

The Green New Deal was introduced this week by Congresswoman Ocasio-Cortez and Senator Markey. It is best described by Jason Grumet, head of a conservative Washington, DC think tank, as “a mirror that allows anyone to see their own interest.” It is a resolution that Members of Congress can support because it doesn’t challenge their corporate donors while it gives the illusion of addressing the climate crisis.

The Green New Deal has received mixed responses from the climate justice movement. Some see it as a positive because the idea was introduced in Congress, while others raise serious concerns that its contents leave too much wiggle room for things to stay the same. What becomes of the Green New Deal is up to us to determine.

The Climate Crisis is Here

Dahr Jamail stated that while the amount of climate devastation he described in his book is severe, new reports since his book show the climate crisis continues to worsen. In January, scientists reported that Thwaites Glacier in Antarctica has a giant hole under it, two-thirds the size of Manhattan, and is melting faster than they thought. It alone could raise sea level globally by two feet.

Another new study finds that ice in the Himalayan Mountains is melting faster than the global average and could practically disappear in this century. They write that if we continue with the same level of carbon emissions, global temperatures will rise by 4.2º to 6.5ºCelsius by the end of the century, far higher than the goal of keeping global warming below 1.5ºC and far more disastrous.

It’s not as if our lawmakers are unaware of the crisis. US intelligence analysts cited the climate crisis as a significant threat to global stability in their recent Worldwide Threat Assessment because of loss of resources like water and resultant migration. They also alerted Congress members that some US military bases are at risk because of rising seas and storms.

The most recent United Nations Intergovernmental Panel on Climate Change (IPCC) report, which is considered a conservative document, calls for immediate action to attempt to keep the increase in temperature below 1.5ºC to give the best chance of human adaptation. The current levels of fires, storms, drought and more are the result of a 1ºC temperature rise, and they will worsen exponentially as the temperature goes up. The IPCC states, “limiting global warming to 1.5°C would require ‘rapid and far-reaching’ transitions in land, energy, industry, buildings, transport, and cities.”

The Door is Open for a Green New Deal

The Green New Deal, which could create such a transition, is an idea that has finally broken through into the mainstream public dialogue. Congresswoman Ocasio-Cortez has been working on it since she won her seat last November. She started with the idea of having a Green New Deal committee, but House Speaker Nancy Pelosi rejected that and created a Select Committee on the Climate Crisis headed by Congresswoman Kathy Castor instead. The committee has little power. It can neither subpoena witnesses to testify in hearings nor draft legislation.

In his analysis of the blue wave, which he calls a “corporate wave,” Nick Brana of Movement for a People’s Party describes the committee as “a public relations stunt for the fossil fuel industry.” He says, “It is worse than nothing to have a committee that pretends to be doing something while ensuring that nothing gets done to address climate change and other urgent environmental crises.”

This week, Congresswoman Ocasio-Cortez and Senator Ed Markey introduced “H. Res. 109 – Recognizing the duty of the Federal Government to create a Green New Deal.” It is a resolution, not a bill, that provides a framework for the Democrat’s Green New Deal. It is remarkably vague. It does not even contain keywords such as “oil,” “gas,” “coal,” “nuclear,” or “fossil fuels.”

Several groups have criticized the resolution. The Indigenous Environmental Network listed a number of concerns, from the use of terms that would permit market mechanisms for managing carbon, which would allow fossil fuel companies to keep extracting oil and gas, to not specifying what is meant by clean and renewable energy to failing to recognize the sovereignty of Indigenous Nations, and more. Food and Water Watch cited significant omissions in the resolution, writing that it needs to “halt the expansion of fossil fuels immediately, ensure that the transition to 100% renewable energy happens by 2035 at the latest, [and] exclude dirty energy sources like nuclear power…”

Whitney Webb explains that the Green New Deal leaves a lot for corporations to like and views it as an effort timed to benefit the Democrats in the 2020 elections, rather than a serious attempt to address the climate crisis. She compares it to the Green Party’s version of the Green New Deal, which calls for an immediate halt to investment in fossil fuels, 100% renewable energy by 2030, defined as wind, solar, tidal and geothermal, the creation of a Renewable Energy Administration tasked with supporting the development of cooperatively-owned energy and reducing the military by 50% to help finance the transition.

A Vision for a Green New Deal

Even if it is primarily an election season ploy for Democrats, to the millions of people who worry about the climate crisis and are pushing for solutions, the Green New Deal is an opportunity to define the transformations we need. That’s how Kali Akuno of Cooperation Jackson views it. He calls on “the Left to intervene” to make sure the Green New Deal doesn’t support the “market-based capitalist extractive system.” Akuno states that an ideal Green New Deal would prioritize reparations through financial compensation and decolonization.

Susan Scherarth and Sean Sweeney write that market mechanisms must be replaced with the concept of energy democracy, “public and social ownership of energy, to serve both social and ecological needs…” They view energy as a public good and a human right, not a commodity. Other writers argue that the Green New Deal must include a new agency that supports the development of energy cooperatives, much like the Green Party’s Renewable Energy Administration proposal. The Backbone Campaign takes that even farther with Solutionary Rail, a plan to create electric rail that moves people, freight and locally-produced renewable energy around the country. We interviewed Bill Moyer and Steve Chrismer about it on Clearing the FOG in 2016.

Current industrial farming techniques contribute significantly to greenhouse gas emissions. Elizabeth Henderson writes that sustainable agriculture must be part of the Green New Deal and outlines what that looks like. It includes support for agricultural cooperatives and family farms, unions for farm workers, regenerative farming and a just transition to end factory farms and the use of toxic chemicals.

Financing the Green New Deal is another opportunity to have an impact on transforming the economy. Ellen Brown describes how using a network of public banks to finance the transition to the new energy economy would not only avoid using tax dollars but would also generate a return to the government. We have long argued that instead of the profits from the transition going to Wall Street, they could be used to finance a universal basic income, which would reduce or eliminate poverty.

These are just some of the ideas that could be used to fill in the gaps of the Green New Deal and ensure it is both transformational in a way that ends wealth inequality and effectively addresses the climate crisis. Adam Simpson interviewed Johanna Bozuwa of the Democracy Collaborative, Anthony Torres of the Sierra Club and Evan Weber of the Sunrise Movement about their ideas for creating a new economy through the Green New Deal. We need to keep the public debate going on these issues to generate a common vision of what the Green New Deal could be.

There are many ways that we can make a transformative Green New Deal a reality even with a Congress that is bought by the polluting industries who profit by destroying the planet and hope to profit from attempting to fix it. The Sunrise Movement, a youth-led movement focused on the Green New Deal, is organizing people to impact Congress with their current week of action. They led protests in Congress over the past few months.

To win, there will have to be a movement outside of Congress that builds a national consensus for what the Green New Deal must be. If you are a member of an activist or community group of any kind, you can generate discussion and action about it.

On top of that, we need to continue the current work to shut down new fossil fuel and nuclear infrastructure, create democratized renewable energy programs and push for policies at the local level that put in place the changes we need to transportation, housing, food and farming, and the economy. There is something for everyone to do in their community.

Through all of this, we need to prioritize the voices and wisdom of those who are the most impacted by our current dirty energy and unfair economy and respect the sovereignty of Indigenous Nations to control what happens on their land.

The Green New Deal as a concept has arrived. Where it goes from here is up to us.