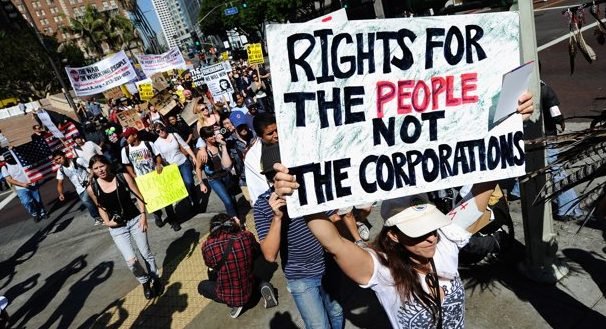 An American Democracy Movement is fighting brutal capitalism and the culture of blame.

In this tumultuous world, one thing seems certain: today’s dire threats to our democracy did not arise out of nowhere. Every culture thrives, or not, on whether its core narrative—the causation story we tell ourselves—enhances mutual gain or spurs division. And, the narrative driving today’s unfolding catastrophe feeds the latter.

It begins with a deep distrust of human nature.

Way back in 1651, philosopher Thomas Hobbes in Leviathan summed up our nature with the Latin proverb Homohominilupus, “Man is a wolf to his fellow man.” From this thought tradition, now reinforced through much of media and advertising, we absorb the notion that humans are essentially selfish, competitive, and materialistic. Yet, with this dim view of our nature, how can we possibly make society work? The dominant narrative has the answer: Just put self-interest to work.

So, by the end of the 1980s, the notion of a “free market” driven by calculated self-interest had risen to economic gospel. Influenced by 20th-century economists—led, for example, by F.A. Hayek and then Milton Friedman and his “Chicago School”—we’ve come to see the “free market” untethered from human meddling as an almost infallible law. It’s what Ronald Reagan called the “magic” of the “marketplace,” efficiently sorting out winners and losers for the benefit of all.

With help from a handful of billionaire families, this free-market ideology took hold. Since the 1970s, their funding has spread the idea of government-as-problem and market-as-solution through policy think tanks, the media, higher education, and far-right political organizing. The mindset steadily drove into private hands what had long been public goods—from the airwaves to schools to prisons—while simultaneously decimating government’s role in protecting public welfare.

Not surprisingly, trust in government has dropped to historic lows. Only one in five of us now feels such trust, down from roughly three-quarters in the late 50s.

Taking a step back, however, we can see that no market is “free.” While all markets have rules, ours has been increasingly whittled down to just one: Do what brings highest and most immediate return to existing wealth. Following Friedman’s mantra, the sole purpose of business must be maximizing profit.

With this simple logic, wealth inexorably accrues to wealth, making quickening economic inequality a given. Since 1980, the top 1 percent of U.S. earners has doubled its share of total income. And the top one-tenth of that 1 percent did even better. Its total pre-tax income quadrupled between 1980 and 2010. Compared to Europe, America now takes the economic inequality cake.

But Americans acquiesce, since market doctrine has convinced us to view the success of the few as deserved, or at least an inevitable side-effect of what’s conveyed to us as virtually a law of nature.

First, once trapped in the myth of the free market, Americans tie their own and their compatriots’ worth to their wealth. And, once accepting the notion of an unerring market rewarding those who work like the devil to succeed, it follows that those who fail to attain the “American dream” are at fault, and therefore undeserving. Representative Paul Ryan captured the outcome of this mindset when in 2012 he described our country as divided between the “makers” and the “takers.”

Plus, the aura of infallibility surrounding the market convinces many that assisting the “laggards” throws the market out of kilter, harming us all.

Then, once accepting, even unconsciously, that a market unerringly picks winners and you yourself are struggling to get by, it’s hard not to feel shame. To shield ourselves against shame, understandably many turn to blame. Especially when primed.

In Strangers in Their Own Land,professor Arlie Hochschild offers a helpful metaphor with which to understand the rush to blame. She describes the economically decimated, white working-class mindset this way: You’ve been waiting in line for the American dream, all the while playing by the rules and working hard. But the line isn’t moving. (In fact, workers’ real income has hardly budged since the 1970s.) Then, in coded and not-so-coded terms you’re told those others—people of color, immigrants, refugees—have cut ahead of you thanks to government favors and affirmative action policies.

Of course, you’re angry, and the blaming frame sticks even though whites have been the main beneficiaries by far of government rules and programs.

Into this flammable mix of suffering and confusion, Donald Trump’s hate speech throws a torch. White nationalists behind the Charlottesville tragedy acknowledged that they’d felt encouraged by the president. Tapping into the anger of those primed for shame and blame, Trump distracts Americans from the core, system problem—a one-rule market inexorably concentrating wealth—undermining democracy and thus our power to come together to shape solutions.

The second huge downside of a narrative making tightly held economic power inevitable is that almost universally it translates into tightly held political power. The 2016 federal election cost $6.4 billion, two-thirds of it coming from well less than 1 percent of donors. Those elected are thus set up to serve the donor class, not all Americans.

In 1938, Franklin Delano Roosevelt warned Congress of the dire consequence: “[I]f the people tolerate the growth of private power to a point where it becomes stronger than their democratic state itself,” he told us, “that, in its essence, is fascism.”

And the cycle is self-reinforcing.

The more money drives our political choices, the more policies favor the better off, bringing still more impoverishment, suffering, and blame. Today, half of babies born in America are so poor they rely on public aid for sustenance, and poverty robs Americans of years of life as the gap in lifespan between rich and poor widens. Homelessness is another measure. Not widespread until the Reagan years, it exploded during his presidency. In 2016, more than half a millionAmericans were without homes.

Such outcomes are one reason we call this variant of a market economy “brutal capitalism.” So, what is to be done?

We start by nurturing an evidence-grounded causation story—one aligned with the rich complexity of human nature and with the three essentials we need to thrive. They are a sense of personal power, meaning in our lives, and connection with community, and only inclusive, accountable democracy has a chance of making them possible.

The only way to create this new story of possibility is through our action, and it’s happening. In this dark time, a vigorous and unprecedented democracy movement is emerging. Led by citizens of all backgrounds—inspiring our new book, Daring Democracy—it is uniting groups long focused on specific issues, from the environment to racial justice to labor, who are now joining forces with veteran democracy-reform groups to tackle big money’s grip on our elections and to ensure voting rights. Step by bold step, citizens joining in this never-more-needed movement are gaining confidence in their capacities to shape an accountable, inclusive democracy in which all voices are heard.

Because the democracy movement holds the inherent dignity of all as a core value, this rising movement can be a key in freeing us from our blaming and shaming culture and moving us toward one in which we’re all responsible and thus able to experience the thrill of democracy.

Frances Moore Lappé is the author of 19 books, including the three-million copy Diet for a Small Planet. Her latest book is Daring Democracy: Igniting Power, Meaning, and Connection for the America We Want, coauthored with Adam Eichen. She is co-founder of Food First and the Small Planet Institute.

Adam Eichen is a member of the Democracy Matters board of directors and a fellow at the Small Planet Institute. He is the co-author, with Frances Moore Lappé, of the new book Daring Democracy: Igniting Power, Meaning, and Connection for the America We Want. Follow him on Twitter @AdamEichen.