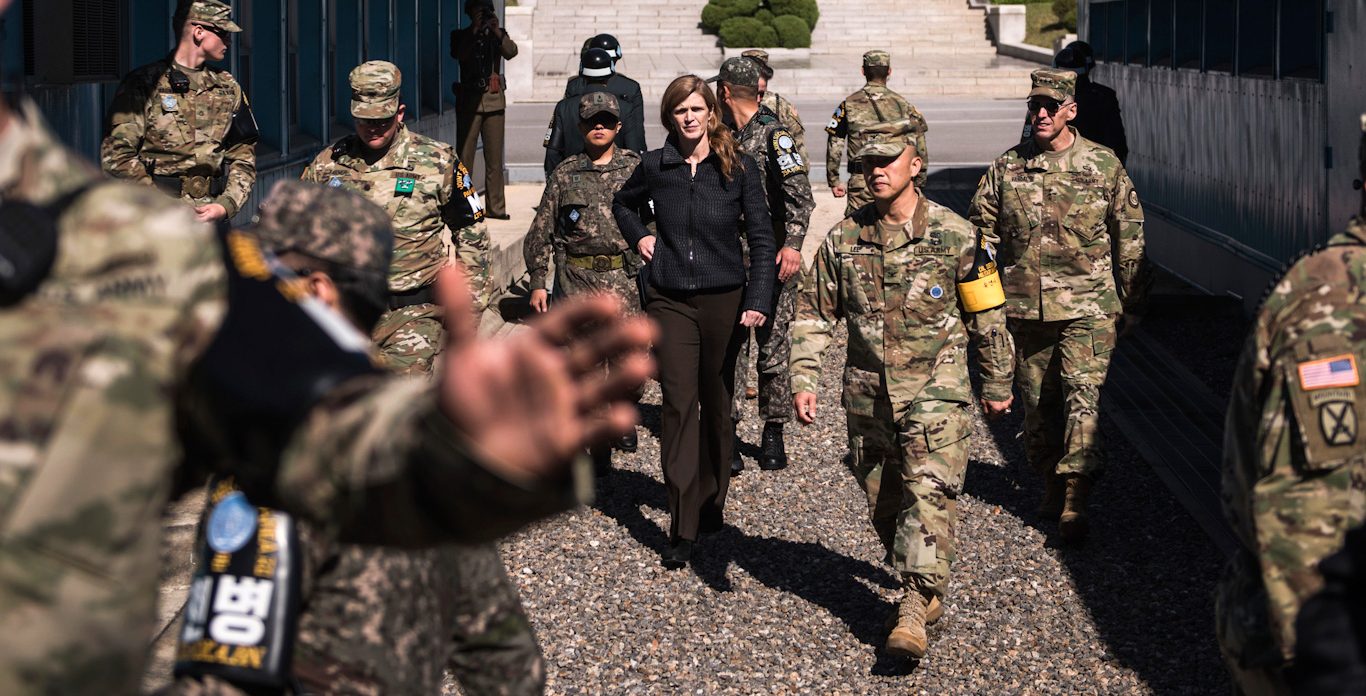 Above photo: Samantha Power, center, walks with U.S. soldiers away from the military demarcation line during a visit to the south side of the Joint Security Area at the truce village of Panmunjom inside the demilitarized zone which separates North and South Korea, Oct. 9, 2016. Ed Jones | Pool Photo via AP.

Samantha Power has been an outspoken advocate of US humanitarian intervention, promoting the Iraq war and defending human rights abusers like Israel and Saudi Arabia.

President-elect Joe Biden has selected longtime Democratic insider Samantha Power to lead the U.S. Agency for International Development (USAID). “There is simply no one better to ensure our development agenda is a core pillar of our foreign policy,” the 78-year-old Delawarean said in a video statement, claiming that, under previous Democratic administrations Power, “fought tirelessly to prioritize human rights.”

A leading voice for humane and principled American engagement in the world, she will rally the international community and work with our partners to confront the biggest challenges of our time. pic.twitter.com/Gv9G8CLrI5

USAID styles itself as a human rights organization, a Washington-sponsored group promoting democracy and development around the world. But if one delves deeper than merely the surface level, the organization has been crucial in financing a number of regime change operations across the globe. USAID money has been used to back opposition insurrections in Venezuela and Nicaragua, for example, while it continues to use its grants to provide leadership training for its preferred political candidates worldwide. Allen Weinstein, a co-founder of the National Endowment for Democracy, an organization USAID funds, told the Washington Post, “A lot of what we do today was done covertly 25 years ago by the CIA.”

Power’s appointment was warmly endorsed by Biden’s vice-president, Kamala Harris. “One of the most pressing challenges facing our nation is restoring and strengthening America’s global leadership as a champion of democracy, human rights, and the dignity of all people,” she said, adding that, “Few Americans are better equipped to help lead that work” than the former U.S. Ambassador to the United Nations.

Others were not so sure. Journalist Glenn Greenwald wrote,

“This is a good choice in the sense that as the head of USAID, an agency *ostensibly* devoted to assisting other countries, Samantha Power can work to repair the damage to all the countries she helped destroy the last time she was in government with her unhinged militarism.”

“A Problem from Hell”

Power came to national attention with the publication of her book, “A Problem from Hell: America and the Age of Genocide.” The book was published in 2002, in the wake of the 9/11 attacks and the invasion of Afghanistan and in the run up to the Iraq War. Unlike other critics of U.S. foreign policy, Power castigated Washington for not intervening enough in other countries, arguing the U.S. has a responsibility to protect the weak in the world. She was awarded a Pulitzer Prize for her work.

In general, Power supported the Iraq War, stating on television that, “An American intervention likely will improve the lives of the Iraqis. Their lives could not get worse, I think it’s quite safe to say,” although she criticized the Bush administration harshly for not effectively managing the conflict.

She got her chance in government once Bush’s years were over, being appointed to a number of positions in President Obama’s State Department and National Security Council, before being appointed Ambassador to the U.N. in 2013. Power presents herself as someone who stopped genocide in Central Africa and was strongly in favor of military interventions in Libya and Syria for the same reasons. Yet in her roles in the Obama administration, Power was a key promoter of some of the worst violence of the twenty-first century.

Yemen is the clear standout example. Described for years by the U.N. as the “world’s worst humanitarian crisis,” the Saudi-led onslaught on the country has led to 80% of the country needing humanitarian assistance, including some 20.5 million lacking access to clean water and sanitation, as Saudi planes target medical, water and sewage facilities. As Ambassador, Power defended Saudi Arabia from criticism and helped block international efforts to respond, even focusing the blame for the violence on Houthi rebel groups. Millions of Yemenis have died or been displaced due to the violence.

Power also strongly defended Israel from criticism at the U.N., despite the country’s bombing campaigns against the civilian population of Gaza. She excoriated the institution for their “unequal treatment” of the Jewish state and for their, “indefensible silence in response to terrorist attacks on Israelis.”

In her latest memoir, “The Education of an Idealist,” there is no mention of Yemen, Israeli attacks on Gaza, or drone warfare, subjects she seemingly edited out of history for convenience. Her “education” already appeared complete by 2014, however, when she attended a baseball game with Henry Kissinger, one of the world’s worst human rights abusers and a man she had previously harshly criticized.

Two years later, she accepted the Henry A. Kissinger Prize from the man himself, a sign that she had earned his respect and admiration.

In a sense, Power could be seen as the perfect pick for the Biden administration; a woman who continues to use the language of human rights, but completely committed to the U.S. imperial project and is every bit as hawkish as her Republican counterparts. With groups close to the president already advising him to push for increasing tensions with Russia and China, Biden might have found the right person for the job.