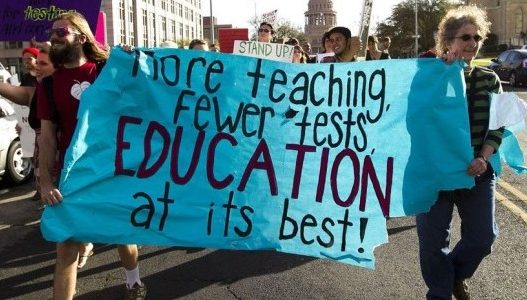 Above: Education protest in Chicago

Late last month, over 100 teachers, students, and parents from across the country gathered in Denver for the United Opt Out National Spring Action, a conference aimed at growing the resistance to corporate education reform and high stakes standardized testing across the nation. Throughout the weekend, the education activists brainstormed and planned in area-focused work groups, interspersed with talks from, among others, a Finnish teacher and education scholar, a parent turned education activist, and a high school senior. All of it revolved around one central theme: organizing resistance to the global corporate education reform movement.

The event was organized by United Opt Out (UOO), an all-volunteer organization of parents, teachers, and students dedicated to ending the use of high stakes standardized testing in schools by creating organized, large-scale refusal to participate in high stakes testing regimes. UOO originally formed with the intention to increase the number of people “opting out” of high stakes standardized tests – whether parents preventing their students from taking them, students refusing to take them, or teachers refusing to administer them – but it has become much more.

While the opt out strategy remained central, the conference attendees participated in weekend-long discussion groups focused on devising even broader strategies to build a broad-based movement aimed not only at stopping the corporate education reform machine, but at transforming and democratizing public education as a whole. The groups focused on a number of areas from winning back local control of school boards to strengthening teacher unions to educating the broader public about the effects of corporate reform on their communities and their children’s futures. Their aim is nothing short of a revolution in the public education system.

“This is the education revolution,” said high school senior and conference speaker Alex Kacsh. “We are creating a better tomorrow.”

How is not taking or administering a school test part of the revolution? High stakes standardized testing is the cornerstone of the neoliberalism’s corporate education reform agenda – and also its Achilles heel.

Reshaping of education systems as privatized, competition-based markets instead of public, collaborative infrastructures for educating a society’s young people all relies on high stakes standardized tests to measure “success.” Test scores then become the weapons that corporate reform policies use to privatize public schools, standardize curricula, break teacher unions, and pick winners and losers in the “competition” it creates among schools.

And as Dr. Ricardo Rosa, a Cape Verdean immigrant and scholar who spoke during the weekend, reminded the group, dismantling that weapon is striking a blow in the global fight against imperialism: the US has been exporting these education policies around the world not as a way to better educate the next generation, but as social and economic policies rigged against the people they’re foisted upon.

Defeating corporate education reform here in the US could save millions of young, critically thinking minds around the world. And figuring out how to grow a movement that can prevent the destruction of that vital resource for the revolution is what kept the education activists at the UOO gathering energized all weekend.

Since it was formed parent and teacher activists in 2011, United Opt Out began a campaign of educating students, teachers, and parents across the country on strategies and protocols for opting their children out of state testing as well as supporting teachers who refuse to administer the test.

A staple of that campaign has been the annual UOO national conference, of which the Denver gathering was the third. The previous two gatherings served as educational and networking events where  parents, student, and teacher activists from across the country could support and learn from each other and share what was working and what was not. But this year, UOO came to Denver to take the opt out movement to the next level.

“This is our third gathering,” says Boston UOO organizer Ruth Rodriguez, “and we felt that we needed to move on. We’ve identified who the enemy is, we’ve identified what the issues are, so this weekend is about working for action.”

This year’s gathering was intended to be a time that the national UOO network could turn its attention toward planning and supporting local resistance in one place. Ceresta Smith, a veteran teacher from Florida and UOO co-founder, says that coming to Denver was a strategic decision. “Colorado was selected to begin to create a model for organizing and action implementation that can be replicated across the country,” Smith said during the gathering.

“We’re going try to take this type of activity to other areas in the country,” Smith says. “We’re not going just stop in Denver.”

Attendees were roughly half Colorado locals and half education activists from other parts of the country who came to reconnect and to add their ideas and resources to the local struggle in Colorado. The hope was that as strategies devised over the weekend play out, lessons learned in Colorado can be used to inform struggles starting up in other places. As Rodriguez put it, “From here, our hope is to galvanize communities all over the country to take on the task of fighting [the corporate reform movement].”

The UOO conference working groups focused on strengthening strategies to bring that fight to many fronts at once: working to support and grow models of social justice unionism among teachers, supporting parents in opting their children out, educating the public about corporate education reform, and looking to students for leadership in encouraging their peers to join the fight. UOO hopes to eventually distill the best of the ideas into a publication that can be used as an guide and resource for education justice activists across the country.

Spreading The Word, Getting Noticed

A key to those strategies taking hold has been UOO’s ability to share their knowledge and resources. UOO has used their website to compile years of research, with an archive of guides and tutorials for opting out tailored specifically to almost every US state being the highlight. Mobilizing the information strategically in this way has helped make UOO’s resistance increasingly widespread and effective.

Too effective, it appears, for their opposition not to notice.

“It’s clear we pose a serious threat,” Denver UOO organizer Peggy Robertson said, as she explained to others on the second day of the gathering that the UOO website had just been hacked into and destroyed – along with a great deal of their web-based educational tools. “It’s pretty clear that it’s not the typical hack job,” Robertson said after consulting with UOO’s online support provider, “it was malicious.”

While Robertson and other UOO organizers don’t know for sure who was responsible for attacking their website, judging from the timing, how the attack was executed, and what resources it destroyed, it was tempting to speculate that the attack was connected to those who profit from the current testing regime UOO seeks to undermine.

“Our site has been maliciously hacked and destroyed in an act of political sabotage” is how the placeholder website reads for now. “Please be patient while we rebuild the site, and get our Opt-Out resources back online.”

“It’s still really hard for me to fathom that this happened,” Robertson said. “But,” she added, the attempt to stop their work makes it obvious, “we are making headway.”

Despite setbacks, the opt out strategy is continuing to gain momentum, and the movement is being joined by growing numbers of teachers and students across the country.

In many school districts, opting out even a small percentage of students from a given test can effectively invalidate an entire school’s test scores, thus denying corporate reformers the test score leverage they could otherwise use against a school, its teachers, parents, or students. That small amount of disruption can be organized fairly simply, but it is especially powerful because it also hinders corporate reformers’ ability to  realize their major goal: profit.

“Without the testing,” Rodriguez says, “there is no profit to be made.”

And without that bottom line driving testing and data collection, the hope is that teachers, students, and communities would be able to regain control of their schools.

“Once you throw a monkey wrench in the profit machine,” says Smith, “You’ll have to go back to the old ways, back when [education policy] was very local. It was very close to that individual teacher – with her individual students in her individual class room – who can identify the weaknesses and address them.” At the very least, she says, “it will certainly stop the pilfering and robbing of public schools dollars that are channeled to [corporate reformers]… at the expense of teachers, taxpayers, and children.”

It is the re-establishment of that local control that former Denver school board member Jeannie Kaplan, who attended the weekend’s gathering, is hoping to see coming out of the plans made during the UOO conference.

“We need to beat the power,” Kaplan said. “And that’s done by taking back our schools to have really local control. My priority is to put students, parents, and teachers together, that’s really how it happens.”

The gathering ended with a palpable sense of optimism and determination, crystallized in the closing remarks from Kacsh, who – invoking the words of Assata Shakur – reminded the crowd that “It is our duty to fight, and it is our duty to win.”

When asked what comes next, Smith and other UOO organizers responded that they have lots of organizing to get started on in Denver and across Colorado. They are prioritizing support for Colorado teachers, students, and parents who  know something is wrong and want to stand up, even though they might be afraid, and are hoping it will encourage others around the country to join because they see that they are not alone.

“Our hopes from this weekend will be to get that nice strong model and to take that to other cities that need to be critically informed and become organized,” Smith stated. “Will we get push back? Yes, definitely. But we’re ready to stand up to it and take on the fight.”

If you would like to support United Opt Out in rebuilding their website after the cyber attack, they are soliciting donations, and you can contribute at http://www.gofundme.com/83if88.

Roshan Bliss is a student organizer, inclusivity & anti-oppression trainer, and democratic process specialist with a passion for empowering young people to defend their futures and democratize their schools. Bliss, a former occupy activist, serves as Assistant Secretary of Education for Higher Education for the Green Shadow Cabinet.