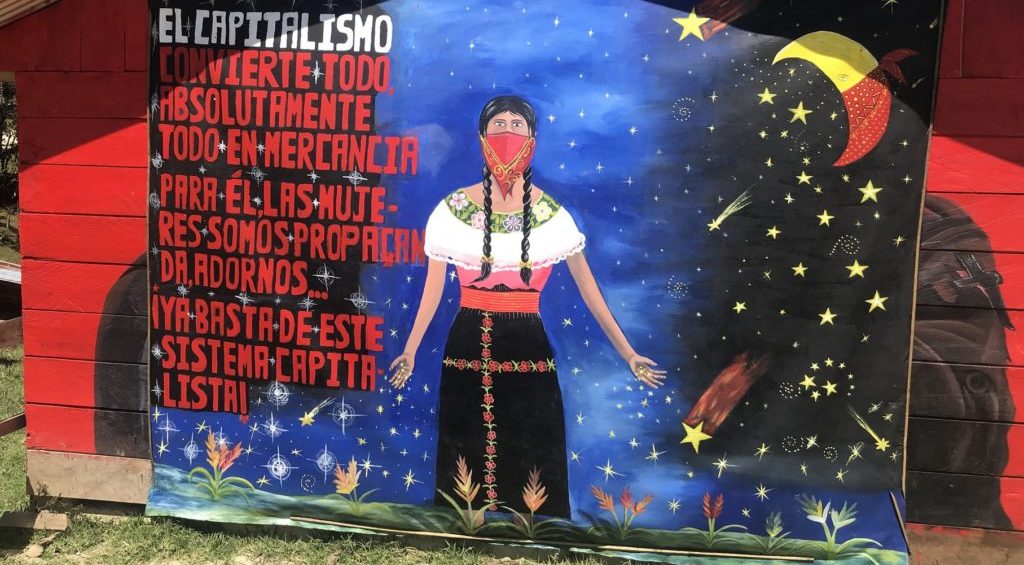 A Spark Of Hope: Lessons From The Zapatistas On The 25th Anniversary Of Their Uprising

Above Photo: At the 2018 International Summit for Women in the Struggle called by the Zapatistas. The mural reads: “Capitalism converts everything, absolute everything into commodities. For it [capitalism] we women are propaganda, decorations…Down with this capitalist system!” Photo credit: Global Justice Now/Flickr/CC 2.0

January 1, 2019 marks the 25th anniversary of the Zapatista uprising in Chiapas, Mexico. For those of us who remember that day well, it’s hard to believe it was a quarter century ago. It’s been many years since the Zapatista movement was the darling of the international solidarity scene, and many years since I’ve been back to Chiapas. But in the era of Trump – of white nationalist populism on the rise around the world, of migrant children dying in ICE detention centers, of countless other horrors, the Zapatista movement still has much to teach us – about having the chutzpah to take on state-sponsored terrorism and global capitalism, while having the wisdom and humility to know that no one has all the answers, that we make the road by walking. There is much to learn from the Zapatista movement about the enduring nature of this work and the patience that comes with that understanding.

In the era of the Me Too movement (with all its successes, we still have so far to go!) there is much we could learn from Zapatista women. I feel lucky to have worked side by side with them for several years, witnessing and absorbing the quiet dignity of their resistance, their unflinching commitment, and their discipline infused with humor, militancy infused with tenderness. In the face of patriarchy’s ugliest manifestations, they made some tremendous strides towards collective liberation. A handful of Zapatista women in key roles of leadership, combined with a broad push from women in the Zapatista base, succeeded in changing laws, institutions, behavior and expectations around gender roles and domestic violence, achieving a series of remarkable transformations for women in Zapatista territory.

In a moment of heightened polarization in the United States, I appreciate the Zapatistas’ ability to remind us what we have in common. A group of indigenous peasants in southern Mexico, the Zapatistas were fighting for land reform and indigenous autonomy. But they also succeeded in communicating a vision of a just society so universal that people all over the world – living in very different contexts from them – felt included in their struggle.

As we face a daily barrage of hateful words and actions, I am reminded of the intertwined relationship between family, community, and political struggle in Zapatista territory, and what that might tell us about building social justice movements that are also a political and creative home – spaces where we foster community, where we treat each other with respect and dignity, where we collectively create some shelter from the storm.

In 1994, the Zapatistas were often celebrated for their creative use of the Internet to reach people all over the world (the Internet being relatively new back then). But anyone who has spent time in Zapatista villages can tell you that was a very externally focused strategy, and that one of the strongest foundations of the Zapatista movement is the deep social fabric of community, the unquestioned assumption that the collective well-being takes priority over the individual. So yes, let’s continue to use new technologies to get our message out, but let’s not forget to build community, and to have rigor and discipline while we do some old-fashioned face-to-face organizing.

I could go on – there are many other valuable, strategic lessons we could draw from the Zapatista movement. But, a quarter century after their uprising, perhaps the most meaningful gift from the Zapatistas is a spark of hope, a sense of what is possible, even in dark and uncertain times.