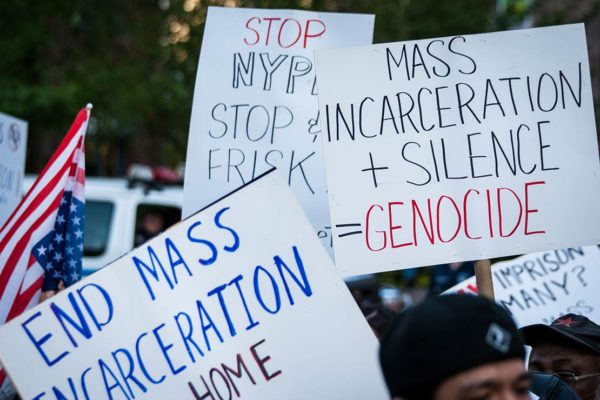 A State-by-State Plan To End Our Mass Incarceration Crisis

Above Photo: From Aclu.org

The Smart Justice 50 State Blueprints are the product of over two years collecting data, analyzing policies, and learning from people impacted by our criminal legal system. This is how we can end the mass incarceration crisis.

The United States locks up more of its people than any other nation in the world. A whopping 2.2 million people are living behind bars in this country on any given day. Our national incarceration rate is four times that of Australia, five times that of the United Kingdom, and six times that of Canada.

This uniquely American problem is not one crisis — rather, mass incarceration is a series of state-based catastrophes, each one different from the next. While much attention was paid to the federal reforms passed last year through the First Step Act, of the 2.2 million people locked up on any given day, 90 percent are under state and local jurisdiction.

Because the overwhelming majority of people are incarcerated at the state level, ending mass incarceration is not something that a single act of congress or a Supreme Court decision can fix. It will require changes to hundreds of laws and practices in all states.

For this reason, over the past three years, the ACLU and the Urban Institute studied the carceral systems in each state, and what it would take to cut each state’s incarceration rate by half. National data fails to guide the most impactful reforms because it misleads and masks important variations from state to state. For example: while some states, like Mississippi and South Dakota, can achieve substantial reductions in incarceration by reforming drug laws, others can’t.

We conducted in-depth reviews in each state, looking at who’s incarcerated, for what reasons, and for how long. We then analyzed the impact future reforms would have on each state’s incarceration rate, including its racial disparities and fiscal savings. We released our findings through 50 state blueprints that explain what each state can do to cut its incarcerated population in half.

This ambitious and first-of-its-kind prison population analysis of each state offers important lessons for anyone serious about ending mass incarceration.

Our findings pointed to a variety of drivers of incarceration. In many states, like Wisconsin, mass incarceration is driven by probation and parole officers sending people into jails and prisons for breaking their rules — some as simple as missing a curfew or not being able to afford a mandatory fee. In other states, it’s driven by needlessly long sentences, even for people who are ready to go back to their communities. Many states, like Michigan, also have rigid time-served requirements that impose extreme sentences on people, requiring they serve 100 percent of their time, with no opportunity to earn credits or good time for earlier release.

But we did find elements that all states have in common.

Racial disparities are so ingrained in the criminal legal system that focusing solely on reducing the scale of mass incarceration cannot mitigate them. It requires a proactive strategy, one that focuses on reforming the discretionary components of the criminal legal system — mainly prosecutors and police, the two primary actors responsible for deciding who enters the criminal legal system in the first place and how to treat people once they’re in the system. This is why it’s so important to hold prosecutors accountable for decisions around which arrests to prosecute, charges to bring, bail to request, and plea bargains to offer. Similarly, we must hold police accountable for over-policing communities of color, including for practices like stop-and-frisk and broken windows policing.

Second, all states rely too heavily on incarceration, including long-term incarceration, for offenses involving violence, even though safe alternatives exist in many circumstances. The truth is, America will never end its obsession with mass incarceration unless we change how we respond to violence. Restorative justice programs which hold people accountable while supporting those who were harmed by a violent crime, have successfully reduced recidivism and decreased symptoms of posttraumatic stress with victims. These kinds of programs better protect public safety than knee-jerk responses to lock people up. For situations that may require incarceration, states should avoid extreme sentences and provide opportunities for people to rehabilitate and earn early release.

Finally, in all states, people with needs related to mental health and substance use make up a shockingly high percentage of people in prison. People with disabilities are two to six times more likely to be incarcerated than people without disabilities. Most of these people should never be brought into the criminal legal system in the first place, and incarceration only exacerbates their conditions. All states must implement reforms to imprison fewer people who would be better served by community interventions, such as voluntary treatment and diversion programs designed to help people experiencing mental health crises or substance use disorders.

We can end mass incarceration in the United States, but it will require each state to take an honest look at the policies, assumptions, and politics that drive its incarceration crisis and implement the required reforms. Some of these reforms are readily achievable, while others are likely to be controversial. But we need audacious change to put an end to our crisis of mass incarceration.