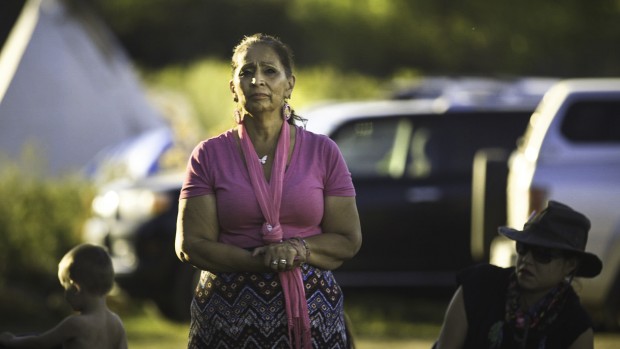 On a Saturday in mid-September, LaDonna Brave Bull Allard ambles through the Sacred Stone Camp, which she founded on her family’s land this spring to stop the construction of the Dakota Access pipeline. The camp started small, but as media attention—and support—grew over the summer, it swelled by the end of August beyond its physical capacity into overflow camps. The population of the largest one, Oceti Sakowin, now numbers in the thousands.

Allard, who is the Standing Rock Sioux’s director of Tribal Tourism, a position that covers historic and cultural preservation, is both inspired and overwhelmed by this outpouring, but she’s careful not to let it distract her. Cold weather is rapidly approaching, and if the water protectors, as they call themselves, are going to make it through winter on the northern Plains, they need to prepare.

She sits behind her black SUV, enjoying a moment of tranquility away from people who might want her opinion on the dozens of tasks that need to be completed. She has tasks of her own to do, and on this afternoon she prepares corn by removing the kernels from the cob so that they can dry and be rehydrated months later. “I don’t know why,” she says, “but dehydrated corn is so much sweeter.”

Every year she prepares for the five-month winter as the Lakota have done for thousands of years, but this year is different. She is surrounded by a mountain of bottled water, food, toilet paper, blankets, and other winter clothing. Many people have come and gone as work and other obligations have allowed, but every day Allard is confronted with the overwhelming logistics of building a community from scratch. A recent cold snap only heightened the sense of urgency, and with a recent court decision temporarily halting construction within 20 miles of the Missouri River at Lake Oahe, the enthusiasm is palpable, while much attention has turned to preparing for North Dakota’s legendary winter.

Lewis and Clark’s Corps of Discovery spent the winter of 1804–1805 along the Missouri River with the Mandan, a few dozen miles upstream from Sacred Stone. On Jan. 10, 1805, Capt. William Clark noted the temperature in his journal to be 40 degrees below zero—72 degrees below the freezing point. In the past 200 years, though, few people have experienced winter as the Mandan did, and even with the mounting effects of climate change, North Dakota’s winters remain fodder for tall tales.

Without trees to slow the wind, unbreakable gusts sweep across the prairie for six months out of the year, easily exposing the weak spot of any winter outfit. Once snow falls, the wind blows a thin white veil across the road, obscuring visibility and leaving the double yellow line as the road’s only discernible marker. Temperatures still dip south of minus 40 Fahrenheit, and entire weeks pass with daily highs stuck below zero. Patches of ice coat the narrow two-lane road connecting Standing Rock to North Dakota’s capital city, Bismarck, and without the occasional opportunity to thaw, they expand as the winter slogs on.

Five years ago, the coming of winter, along with increasing pressure from law enforcement, led to the collapse of another massive protest in another part of the country: the Occupy Wall Street movement. But because the Sacred Stone Camp sits on private land, North Dakota’s numbing temperatures loom as the most daunting obstacle.

In the past weeks, trucks arriving daily have dropped off an assortment of donated goods faster than the camp expected, and the pile has grown uncontrollably. Large blue tarps haphazardly cover many of these supplies, and Allard is eager to find a more permanent place that will better shield them from the elements. As the donation pile continued to mount, she had a small plot of land flattened to make room for as many as a half-dozen 10-by-40 tents, which will house the kitchen, pantry, and commissary. Meanwhile, with some of the monetary donations that have steadily accumulated, she dispatches volunteers to Bismarck to buy necessary goods, especially tents to house the overflowing donated goods.

When the camp started to grow, water quickly became one of the most urgent needs. But to Allard’s dismay, bottled water was the contribution of choice, rather than 5-gallon jugs that would produce less plastic waste. Now, she’s working to acquire a large-scale filtration system as well as an auger that can break through ice to collect water during winter. Other protectors have started to use the discarded bottles to make “eco-bricks,” bottles filled with plastic trash, for use in tent walls as insulation.

Pickup trucks, overflowing with wood, regularly arrive at camp, and within a matter of minutes, protectors pile the logs on the overflowing mound that feeds the campfire. The bark and sawdust are spread atop a muddy spot in the road created by recent rains. In Oceti Sakowin, 18-wheelers carrying massive logs more than 10 feet long and 2 feet in diameter arrive late in the evening. Illuminated by truck headlights, a small backhoe begins unloading the logs. Within minutes, the buzz of chainsaws drowns out the sounds of chanting and beating drums as the protectors waste no time turning the logs into much-needed firewood.

Much of this wood may eventually make its way to the Sacred Stone camp. Because Oceti Sakowin is set in the large, open floodplain of the Cannonball River, it will provide little shelter from winter winds. Many protectors may eventually return to Sacred Stone, sheltered by cottonwood trees, as visiting tribes and supporters return home.

Kandi Mossett is a lead organizer with the Indigenous Environmental Network. Originally from New Town, North Dakota, and a member of the Mandan, Hidatsa and Arikara Nation, she and her colleagues have been organizing activists at Standing Rock since April. As long as there are enough people at camp to stop additional construction of the pipeline, she believes the movement will be able to survive the winter. In addition to bringing in a cellphone booster to allow protectors and journalists to communicate with the outside world, Mossett has helped the camp replace its gas generators with solar panels. Preparing for winter, she is helping to build traditional earth lodges, erecting canvas tents, and bringing in mobile indoor shower stations because once winter sets in, no one will want to take a shower outside.

She’s nervous that some people who haven’t experienced a North Dakota winter don’t fully understand what’s in store. But, she adds, “If people are going to be hardcore and want to stay, I’m really happy about that and excited because we haven’t ever had resistance like this in North Dakota.”

Keenan Gonzalez is one of those hardcore people. “I feel like I’m at home,” says Gonzales, who is from the Mississippi band of Ojibwa, a Minnesota group that was disbanded in the 1940s. He arrived at camp at the beginning of September and has been posted at the Frontline camp, which is positioned across the road from where a pipeline construction crew bulldozed an ancient burial site. He says he is committed to the long haul and likens the experience to the old days, when tribes would call on their allies to support them. His hope is that this will set a precedent for future battles in Indian Country.

Robert Anquoe, a member of the Kiowa Tribe and the vice chair of the Greater Tulsa Area Indian Affairs Commission, agrees. “We’ve haven’t seen this in many years—this type of solidarity and commitment to ensuring the Standing Rock has some support,” he notes, standing beneath the row of tribal nation flags that line the main entrance to Oceti Sakowin. “This gathering is like no other.”

Even two years before founding Sacred Stone and launching this historic resistance, Allard was prepared. “An old Lakota prophecy warns of a large black snake that could end the world,” she whispered then. “For a long time, we thought that meant roads, but now we believe it to be the Keystone XL pipeline.”

Indeed, those details have changed, but the prophecy and their stakes have not, which is why so many of the protectors at Standing Rock are ready to brave the cold months ahead.

Buoyed by a recent court decision halting a portion of construction, a recommendation by the Obama Administration to overhaul the federal government’s relationship with tribes, and increasing media coverage, leaders addressing the camps frequently invoke the idea that something historical and unprecedented is taking place. The power of people can accomplish anything seems to be the mantra, and the pace of work reflects this zeal.

Allard is grateful for the support Sacred Stone has received, but she knows this is just the beginning. Although she’s well aware what winter in North Dakota entails, for many of the protectors, this will be their first. Many have confidence that their strong sense of purpose and the knowledge that they are on the right side of history will help them persevere through the cold months ahead. But despite every preparation being made, they will be tested: Winter is coming.