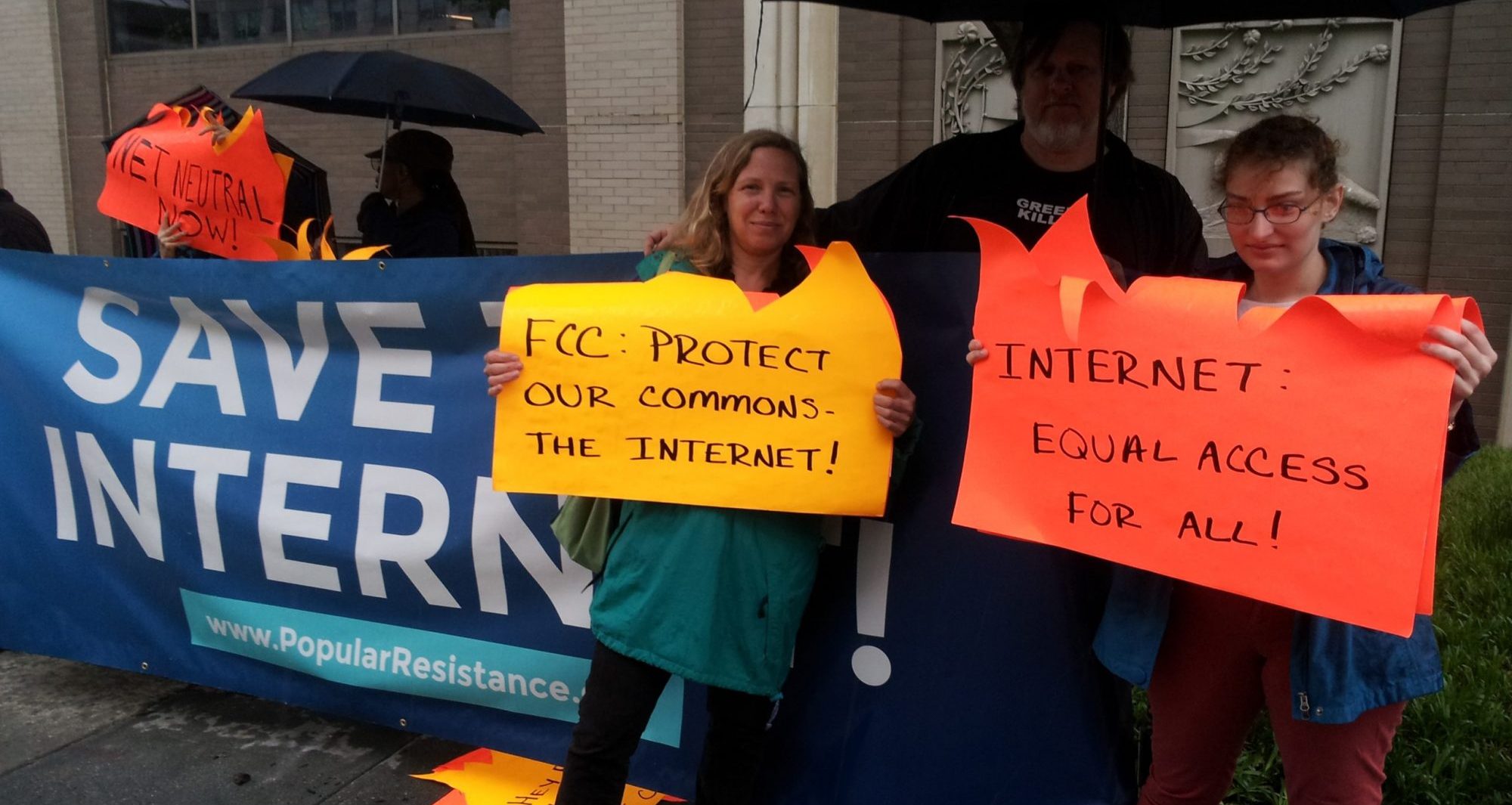 A Tale Of Two Titles

Above photo: Rally at the FCC, May, 2014. Popular Resistance.

During the COVID-19 pandemic, a reliable broadband connection is a health and safety necessity. Families need the internet to connect to remote work, virtual classrooms, election information and telehealth care while maintaining social distance.

But roughly 60 percent of low-income parents say their students will experience digital obstacles when attending online school this fall — including 40 percent who say they will have to seek out public WiFi because they don’t have a reliable internet connection at home. And students aren’t the only ones who need internet access to learn, work and thrive at home — at all times, but especially now.

More than half of all low-income internet users say they are worried about paying their internet and cellphone bills during this crisis. And we know that even before the pandemic, the digital divide disproportionately impacted poorer families and people of color due to high prices and systemic racism (in sectors like credit, banking and housing) that depresses internet adoption too. These are the same communities bearing the brunt of the COVID-19 health and economic crises in all aspects of life.

Yet FCC Chairman Ajit Pai and his industry-lobbyist friends say U.S.broadband networks are responding well to the pressures of the pandemic, all thanks to Pai’s ideology and radically deregulatory agenda. To support this counter-intuitive notion that everything’s going great, they point to the FCC’s tremendously unpopular decision to toss away its authority over broadband service, scrapping broadband’s common-carrier status under Title II of the Communications Act and all the legal tools and protections that law provides.

Their twisted logic suggests that the Obama-era FCC’s decision to properly classify broadband as a telecommunications service under Title II somehow burdened internet providers, leading to stifled broadband deployment and less robust infrastructure. They claim that since Pai got rid of Title II, U.S. internet providers have been motivated to invest more heavily, and consequently have been better able to withstand the stress of increased traffic as COVID-19 has driven more of our daily lives online. And they claim that U.S. networks have fared far better than have European networks, which Pai and friends describe as more heavily regulated.

The only trouble with these claims is that they’re plainly false, in every respect.

First, there’s scant evidence to suggest that U.S. networks responded materially better than others to the pressures of increased usage at home during the pandemic. A report by Cisco-owned ThousandEyes found that broadband networks across the North American, European and Asian Pacific regions all did fairly well with increased traffic loads, and that North America actually experienced one of the highest spikes in broadband outages as lockdowns and stay-at-home orders swept the region in March.

Independent researchers in the United States saw much the same result: a mixed bag at best. Speeds ticked up in some cases, based on tests run by internet users themselves. But more counties and states saw slower median speeds by the end of March, with everyone staying at home, than they had seen at the end of February before the nation started to shut down.

On the other hand, even the research touted by the USTelecom lobby suggests that speeds in the United States and the European Union dipped early on in the pandemic, and then recovered on both sides of the Atlantic as carriers added more capacity.

But cherry-picking data and blowing their conclusion out of proportion is just one of the many sins committed by Chairman Pai and his industry backers. The bigger sin is when they outright get the performance data and the causes for that performance all wrong, as they do with this FCC’s preposterous claim that the agency’s regulatory choices are the primary drivers of broadband-network investment and performance. That is, Pai and company don’t just blur and misstate the numbers; they take false credit for anything they see as a positive trend and ignore any bad news altogether.

As our research at Free Press has shown time and time again, broadband investment and deployment have nothing to do with the fight over Title II. Specifically, there is no evidence to suggest that Title II depressed investment — or that repealing it boosted investment.

Let’s look at the facts.

When fighting strong open internet rules as a commissioner in 2015, and then repealing them when he became Chairman after Trump won, Pai has always claimed that Title II stifles broadband investment. Yet aggregate capital expenditures actually increased during the two-year period when strong Net Neutrality rules and Title II authority were in place. Since Pai’s Title II repeal, aggregate investment has subsequently declined.

Aggregate investment is a bad metric, because it oversimplifies important details about expenditures made by individual firms. However, since Chairman Pai still insists on using incorrect calculations of this metric, it’s worthwhile to set the record straight — and to hold him to the same test he’s tried to use for his predecessors.

Plus, we see the same patterns of increased investment under Title II, and decreased investment after its repeal, when we look at the stories of individual firms. In fact, approximately 92 percent of the fiber deployments made since 2017 — for which Chairman Pai is so eager to take credit — were actually planned and announced during the Title II era. The same is overwhelmingly true for high-speed cable deployments made during Pai’s tenure.

The reality, as internet providers have repeatedly told their investors, is that other factors (like demand, competition and tax treatment) have a far greater impact on companies’ broadband investments than broadband’s regulatory classification as a Title I or a Title II service has.

So Chairman Pai is often taking credit for imaginary deployment gains, or else for expected improvements that he only imagines he caused.

If we look past Pai’s happy talk and his lies about broadband-investment impacts, we can see how the loss of Title II authority has actually harmed internet users during the COVID-19 pandemic. If the Trump FCC hadn’t gone ahead with its ill-advised repeal, the Commission would have had many more tools to get and keep people connected, both during and after the crisis.

Without the tools needed to mandate continuous, just and reasonable service during an unprecedented economic crisis, the centerpiece of the FCC’s response was its voluntary “Keeping Americans Connected” pledge, which called on internet providers to temporarily suspend their data caps, open Wi-Fi hotspots and stop service disconnections for people who couldn’t pay their bills due to the pandemic.

While this pledge was certainly a positive move, it was also toothless, unenforceable and — in the end — temporary. After only two months, Chairman Pai decided that even this inconsistently applied, spotty and voluntary pledge was too burdensome for internet providers.

With Title II, we could have faced the pandemic head on by outright prohibiting disconnections instead of meekly asking ISPs not to cut people off. And the FCC could have strengthened and modernized its Lifeline program, built on a strong legal foundation. That program offers low-income families a modest subsidy to make basic communications services more affordable. By scrapping Title II, this FCC jeopardized its legal authority to extend that subsidy to cover broadband services in the long run, and in the short term largely sat on its hands rather than exploring ways to make the program more useful to people who are disconnected or running out of data.

The D.C. Circuit court also highlighted this authority pitfall in its remand of portions of Chairman Pai’s Title II repeal order — but just this month, the FCC announced it’s planning to stick to its guns. Pai’s latest proposal said that even if a court decided the agency could not use Lifeline to cover broadband without Title II authority, the FCC’s Republican majority would be fine with that. They’d rather kill Lifeline for broadband at a time when record numbers of people are out of work and struggling to afford their internet bills.

In a pandemic, internet connectivity is a life-and-death issue, and it’s one this administration has failed to address. Chairman Pai’s Title II repeal didn’t set the industry up for a strong COVID-19 network response: It just left marginalized people high and dry during a historic crisis without protections from exorbitant broadband prices and corporate abuses.

It’s high time we got the facts straight about Title II and started using all the tools at our disposal to bridge this unconscionable divide.