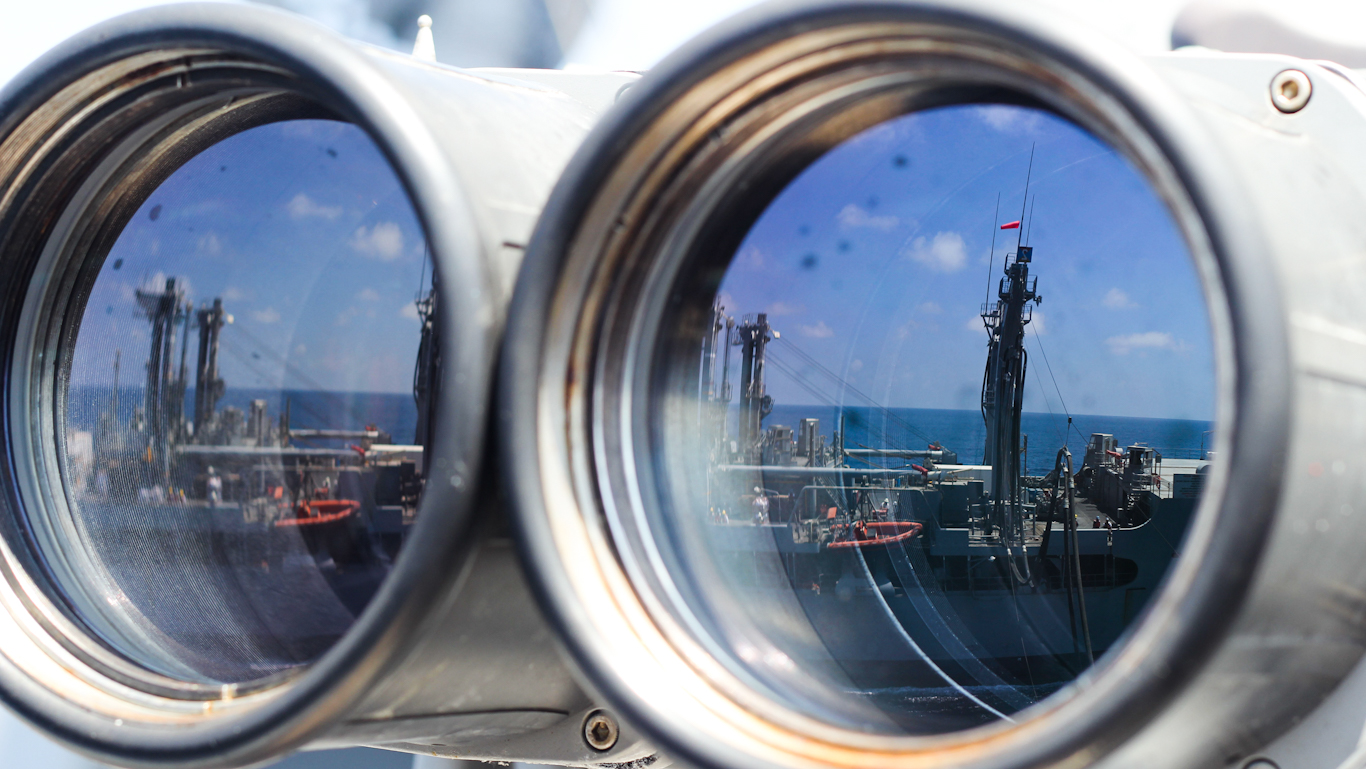 Is Trump Trying to Start a War?

The USS Nitze is conducting what the US military is calling a “freedom of navigation operation… contesting an excessive maritime claim by Venezuela.”

Heightening already increased tensions with the country, a Navy destroyer, the USS Nitze, entered Venezuelan waters yesterday, conducting what the military is calling a “freedom of navigation operation” in the Caribbean. The Nitze, according to Southern Command’s official twitter account, was “contesting an excessive maritime claim by Venezuela. The U.S. Navy ship lawfully navigated an area the illegitimate Maduro regime falsely claims control over.” In addition to the Nitze, an American military Boeing RC-135W reconnaissance aircraft was also spotted in the area. In an official statement, Admiral Craig Faller, head of Southern Command, said that the move was carried out in order to increase regional peace and stability. “The United States will continue to fly, sail and operate wherever international law allows, preserving the rights, freedoms and lawful use of the sea and airspace guaranteed to all nations,” he added.

The warship got to nearly 12 nautical miles from the coast where, last month, a botched invasion led by ex-Green Berets was foiled. The team hoped to shoot their way to the presidential palace, capture President Maduro, and replace him with U.S.-backed politician Juan Guaidó. Washington has been trying to overthrow the democratically elected government since the election of Maduro’s predecessor Hugo Chavez in 1998. Former White House national security adviser John Bolton’s new book, “The Room Where it Happened,” alleges that Trump said it would be “cool” to invade Venezuela as the country was “really part of the United States,” but that he had lost patience with Guaidó, who has now tried to oust Maduro six times, each with U.S. backing, each with less success than the last one. After his failures, Bolton alleges, Trump labeled Guaidó the “Beto O’Rourke of Venezuela” for his vacuous weakness, comparing him to the “strong” Maduro.

MintPress spoke with independent journalist and Navy veteran Ariel Fornari today, who said that the military currently lacks the strength to truly bully Venezuela, considering its overreach in the Pacific, attempting to confront China. “Southern Command’s purported ‘freedom of navigation’ operations inside Venezuela’s exclusive economic zone but outside its 12 nautical miles territorial limits, is another spurious show of force attempts by the U.S. meant more to show the flag as opposed to a strategic naval presence in the region,” he added, arguing that yesterday’s incident was more a symbolic “show of force” meant to “assuage the imperial designs within the Trump regime” rather than a substantive challenge to the Maduro government.

While the U.S. has supported an array of coup attempts over the past twenty years, it has never gone through with any invasions, despite Trump’s repeated insistence that a “military option” was on the table. This is primarily because, as Fornari explained, they have not been able to influence the country’s military leaders, who preside over well-equipped and loyal armed forces. Instead, Washington has attempted to strangle Venezuela through sanctions, which have devastated the economy, blocking off virtually all foreign trade, including in oil, its primary commodity. Only a handful of countries, including China, Cuba and Russia, have broken the unilateral embargo. This has led to crippling shortages of certain foods, medicines, and other essential products. An American Special Rapporteur to the UN, Alfred de Zayas, visited the country, comparing the sanctions to a medieval siege, declaring Trump guilty of crimes against humanity, and estimated that over 100,000 Venezuelans have died as a result. Jeb Sprague, Research Associate at the University of California, Riverside and author of Globalizing the Caribbean: Political Economy, Social Change, and the Transnational Capitalist Class, described the tactic as “death by 1000 cuts,” and a “new type of hybrid warfare.” The whole point of this, Sprague told MintPress, is to “create confusion, divisions, and chaos in Venezuela and generate an impossible situation where the government has shrinking options and can more easily make mistakes or be forced to react in a rushed manner.”

Washington has quietly been gearing up for the possibility of a full-scale invasion for over a decade. In 2008, the U.S. resurrected the Fourth Fleet, liquidated in 1950, specifically to deal with the wave of anti-imperialist governments in Latin America. The military has also dramatically increased its presence on Curaçao, an island just to the north of Venezuela, and in 2006 carried out a wargame there simulating an invasion of the country to capture a leader called “Hugo Le Grand.”

In 2018, Admiral James Stavridis, former head of Southern Command, wrote an article in Bloomberg celebrating Jair Bolsonaro’s dubious election victory in Brazil, commenting that, if they can only break Venezuela, the U.S. will have achieved a “clean sweep” in Latin America. Others, like Senator Lindsey Graham (R-SC), have argued that the U.S. must intervene in Venezuela “the way we did in Grenada,” in 1983 when marines invaded the island and overthrew the country’s anti-imperialist prime minister Maurice Bishop.

Imagine being this craven and no one calling you out on it. That, folks, is imperial hubris. https://t.co/puAiLztzeg

While yesterday’s incident appears to have passed without escalation, sending even more warships to Venezuela’s borders is a clear provocation that could escalate into a hot war. Sprague noted that “There is a long history of this, of the Navy being used to pressure adversaries.” In 1898, the U.S. used the highly suspicious destruction of the U.S.S. Maine to intervene in the Spanish-American War, invading and occupying Cuba, while in 1964, it lied about the Gulf of Tonkin incident to justify ramping up war with Vietnam. The USS Nitze is named after Paul Nitze, Deputy Secretary of Defense under Lyndon B. Johnson, responsible for planning and carrying out the Vietnam War, the casualties of which the Vietnamese government estimates at around 3.4 million. In 2016, the ship was involved in a similar incident off the coast of Iran, where it was chased away by four Iranian patrol craft. Fortunately, it appears that, as with Iran, this new incident has not escalated the conflict, no thanks to the U.S.