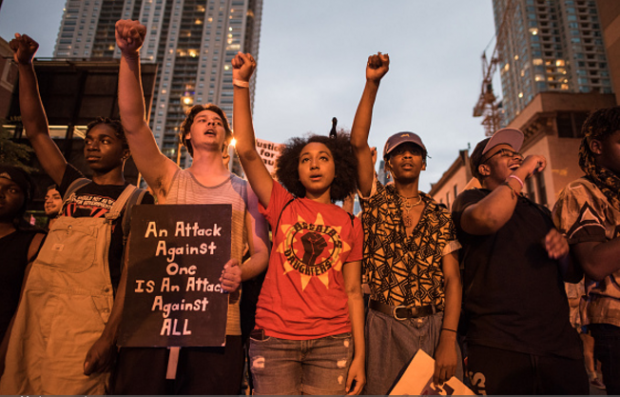 Above Photo: from Getty Images

On August 1, the Movement for Black Lives, with support from dozens of related organizations, issued its vision of a transformed United States that could realize racial justice. The vision is a major step forward in coherence and clarity for a still-young grassroots insurgency, and deserves the attention of allies everywhere.

As you would expect from the movement’s origins, the document leads with the need to stop the institutionalized practices and justifications for violence against black people. The writers place black queer women, trans, unemployed and incarcerated youth at the center since those groups are a margin within the marginalized black community.

Thoughtful visionaries know that stopping historic injustice requires creating alternatives. The document outlines a set of specific alternatives. Although in this brief column I won’t try to summarize the multi-dimensional Movement for Black Lives vision, I am struck by how powerfully the main features make sense not only on their own, but also how they interact with each other.

The wisdom of the reparations section of the platform lies in its acknowledgement that, as Martin Luther King, Jr. never tired of saying, “justice delayed is justice denied.” Additional steps need to be taken to make up for the century-and-a-half interval since the federal government broke its promise to an enslaved people, the promise of a fresh start.

The reparations emphasize grassroots economic development, including co-ops. These confidence-building measures interact with a separate section on economic justice and another called “Invest-Divest.” When the assortment of tools is put together the result is greater than the sum of the parts. The vision offers what is most prized in a design: synergy.

For example, the vision calls for using tax codes to redistribute wealth and starting jobs programs that provide a living wage and offering free training and education and allowing enhanced freedom for workers to organize unions. It’s easy to see the synergy, and the resulting re-weaving of a community battered by racism and joblessness.

What the mass media miss

The boldest thing about the vision is that it is for all of us. Those who portray this as special pleading by “an “interest group” are wrong; it is not Lyndon Johnson’s so-called War on Poverty or a renewed call for affirmative action. The document urges what non-black people also need, for example to oppose privatization of publicly owned institutions and to set aside the Trans-Pacific Partnership, or TPP, trade deal. It demands democratic control of natural resources and public schools.

The vision will benefit all of us; we must beware of the subtle tendency to reduce the impact of the vision by reducing it to the color of its origins. Note The Guardian’s August 1 coverage of the vision: “Alongside the race-specific measures are also progressive wish list items such as forgoing fossil fuels for renewables, universal healthcare, cuts in military spending and public election financing.” The condescending journalist’s separating out a “progressive wish list” reveals the lack of understanding of what a vision is, and of who is entitled to envision. King had the same problem when he came out against the Vietnam War and was criticized by white liberals who hinted that he should stay “in his place” as a “race leader” and not poke his nose into matters better handled by the people suited to take wider responsibility — the white people.

I see the document as highly integrated, rather than a segregated set of race-specific proposals with a wish list “alongside” it. Why create jobs and alternative institutions that cannot be sustained after passage of the TPP? Why demand billions from the federal budget for community development if that money is already reserved for the military-industrial complex? How is poverty to be abolished if billions are wasted on our inefficient private health care system? The “wish list” is in fact necessary for the whole.

The mainstream media also miss the full value of a vision to a social movement. Vision is only partly public relations for a young movement; more importantly, it serves to guide the movement itself and support it to grow.

“If you don’t know where you’re going, any road will get you there,” as the saying goes. We choose more effective everyday tactics when we know where we’re headed. Strategy’s job is to put tactics together over time to increase the movement’s growth and power, so it’s even more important to know our destination when we choose a strategy.

An example of vision’s importance is in Earth Quaker Action Team’s new campaign, which demands increased use of solar energy. The easy strategy for EQAT would have been to encourage middle-class suburban white folks to solarize their houses.

The likely destination of that strategy, however, would be a “solar divide” — something like the “digital divide” generated decades ago: People with money get benefits poor people can’t access. The destination would increase the class divide.

Instead, EQAT’s strategy is to use direct action to push the electrical utility to invest in solarizing suitable roofs in poor communities of color — a strategy in line with EQAT’s vision of racial, economic and climate justice.

Vision also protects against burn-out. Many activists dwell on what we’re against — white supremacy, capitalist exploitation, war. I’ve known plenty of people who burned out while working against something. A negative posture doesn’t protect against the inevitable hurts and disappointments that go along with justice work. The initiators of the Movement for Black Lives’ vision clearly know that this struggle will go on for a while. Positive vision helps sustain us for the longer run.

Vision also helps by supporting unity. Activists may disagree about this or that tactic, or an organization’s style, but if we agree on our aims, we have reason to “agree to disagree” and accept a diversity that’s uncomfortable. Shared, big-picture goals encourage us to work together.

Vision has been pivotal in some of the most successful mass movements in history. I realize we can draw inspiration from current movements that haven’t yet reached their goals, and even movements that had potential but were tragically defeated. In addition, I am fascinated by movements that were successful in establishing “the big three” — democracy, economic justice and individual freedom.

I’ve been researching success stories of the latter kind, a cluster of movements that started small in the midst of poverty and oppression, and after struggle and sacrifice achieved more of “the big three” than anyone I know. Two of the movements faced repression by their own economic elites, including troops called out and nonviolent demonstrators killed. In two of the countries progress was interrupted by armed invasion and occupation by Nazi Germany, with the setbacks you would expect.

I tell the stories in my new book, “Viking Economics: How the Scandinavians got it right and how we can, too.” There’s a striking parallel between those countries and the platform of the Movement for Black Lives.

Meeting the critics of the Movement for Black Lives

Critics will dismiss the new vision as “idealistic and impractical,” but I meet critics on their own ground by citing the practical superiority of the Scandinavians’ achievements in jobs and justice. The Scandinavians’ policies are like those proposed by the vision of the Movement for Black Lives.

Norway has the lowest rates in Europe of repeat offenders and the least punitive correctional system. Scandinavian police don’t carry guns. People there have free higher education, including trade and professional schools. Pensions and virtually free health care are universal. They have full employment policies and “vocational rehabilitation” for people who need training, just as the Movement for Black Lives demands.

Despite their history of great poverty, the Scandinavians now have almost none. And despite Sweden’s history of ethnic homogeneity, the country has been racially diversifying for the past half century, recently accepting more refugees from Syria per capita than any other country in Europe. Scandinavians I interviewed for my book acknowledged that they have many problems remaining. Still, the fact remains that their decades of struggle pushed the economic elite out of dominance and opened the space to create what economists call the “Nordic economic model.” Their top-of-the-charts achievements were the result of putting in place the kind of vision that is now being urged for the United States by the Movement for Black Lives.

I don’t know if white allies are willing to see the necessity for economic change as part of the struggle for racial justice. Bayard Rustin, the gay black civil rights leader who personally influenced me the most, told me half a century ago that until our country tackled economic justice with what is essentially a socialist program, racism would continue its vicious hold on our country.

Clearly, Rustin was right. He would, I think, be pleased to see a possible convergence happening now: the white youths and people of color resonating with Bernie Sanders joining with the inspiring vision of the Movement for Black Lives, both movements deeply aware of the crisis and opportunity given by climate change.

Now we have tools, resources and knowledge we have not had before in my lifetime. These we can use while seeking unity, as the crisis deepens.