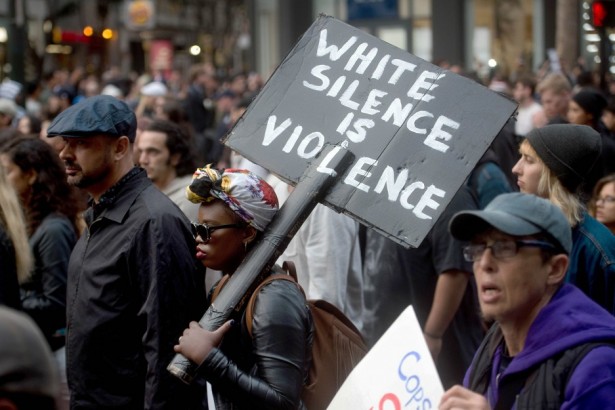 A Wake-Up Call For White Progressives

Above Photo: A woman holds a sign as she and hundreds of other protesters march against the recent fatal shootings by police of black men in San Francisco. (AP Photo/Noah Berger)

The night after Alton Sterling was killed by police, I got home from work late.  When our three children were asleep, my wife and I finally had a moment together.

The first thing she said, as if she had been sitting on it all day, was: “I feel like we need to get a Black Lives Matter sign for our yard. I know it would be unusual in our neighborhood.”

We live in Chevy Chase, D.C., in one of the wealthiest zip codes in the city. There are about 30 houses on my block, and only one African-American family that I know of. But it didn’t surprise me that my wife wanted a public display of solidarity.  In 1990, when she was 16, her classmate Phillip Pannell was shot in the back and killed while fleeing police at the elementary school they had attended in Teaneck, New Jersey.  It molded her thinking on race and justice.

I was non-committal on the sign—not opposed, I just hadn’t thought of it before.

I had always considered myself a good ally on race: I was born in the nation’s capital on one of the worst days in American history—the day after Martin Luther King, Jr. was assassinated—when the city was burning, the National Guard was deployed, and a curfew was imposed.  As far back as I can remember, I have thought about what the man—and the movement—have meant to our nation, and the connection between the pogroms my family experienced in Europe and the African-American experience here.

Exhausted, I drifted off picturing it in our front yard: Who would we be speaking to?  What would the sign achieve?  Would it cause people to target my home or my children? How would I explain the sign to my 3- and 6-year olds?  (My 10-year-old could probably get it, and maybe that conversation was overdue.)

I woke to the news of Philando Castile—shot dead in his car in front of his girlfriend and her 4-year-old child as he reached for his license and registration.

I came to work not wanting to continue business-as-usual.  Instead, I joined a gathering of about 50 of my colleagues to talk about the killing of black people.  I didn’t talk, myself. That’s what many white allies think we should do when people of color are suffering: shut up, listen, and be supportive.

When will you get as angry as I am? Which killing will be the one that finally does it for you?

My black friends and colleagues expressed anguish, anger, hopelessness, hope, and sheer exhaustion.  But what stuck with me the most was when a black male colleague asked his white coworkers, “When will you get as angry as I am?  Which killing will be the one that finally does it for you?  I feel hopeless.  And nothing changes in this country unless white people want it to.”

I left looking for a way to take action. The news cycle will move on from these killings, but my colleagues and I can make sure TalkPoverty doesn’t.  I reached out to some folks who had shared powerful reflections during the meeting and asked if they were interested in writing.  You will likely hear from some of them in the coming days.

But one friend emailed me, “I’m not in a place where I can write yet. If you want to get the ball rolling, it’s a great act of allyship to know you don’t have all the answers but want to show support when your peers are hurting, especially when you have a platform.”

I woke up Friday morning to the news that five police officers were killed in Dallas. I was hit with shock and sadness—and then the realization that people will try to blame the Black Lives Matter movement.  I checked Twitter and Facebook, and sure enough that narrative had already emerged.  I’m not a huge fan of tweeting, but the message I received from my colleagues the previous day was that white people need to speak up.

I went downstairs and asked my wife if she had heard the news. She hadn’t, and when I told her, her jaw dropped. My 10-year-old daughter noticed.

My daughter and I walked out of earshot of her younger siblings. We sat down and I told her what had happened in Dallas, and also what the people had been demonstrating about: You know how if Mommy or Daddy were driving too fast a policeman would stop us and give us a ticket, and then we would drive away?

From there I struggled through what she has learned in school about racism in the past—slavery, segregation, civil rights—but also what she didn’t necessarily understand yet: that racism isn’t gone. I told her that some people think that black people aren’t as good as other people, or they are afraid of them, or both, and it has led to things like black people getting shot (my daughter winced) when they should have just gotten a ticket, or not even that. So now there are a lot of us saying “Black Lives Matter” to fight against racism that has never gone away.

I’ve been in a slumber, because I could be, without even knowing it.
I told her if we were black we would have had this conversation when she was younger and it would have been very different, something like: “If a police officer ever talks to you, listen to whatever he says, you can’t talk back, you can’t make any quick movements, because some of them might be prejudiced against you just because you are black and hurt you badly. People even get killed.” I told my daughter that black parents have to worry about their children’s safety in ways her mom and I don’t, simply because of skin color.

She got it much better than I explained it, I think. Just as she thought it absurd when she first learned there was never a black president before Obama, and literally laughed aloud, incredulous, when I told her there has never been a woman president. Because in her world, there is no room for these injustices—just as there is no room for a parent needing to have a conversation with their child about the life-and-death stakes of their interactions with police.

My wife and I are getting the Black Lives Matter sign. We’re posting it in our lily-white neighborhood, which is exactly the kind of place where we need to start these long overdue conversations.

I used to think I was very progressive on race. But I’ve been in a slumber, because I could be, without even knowing it.