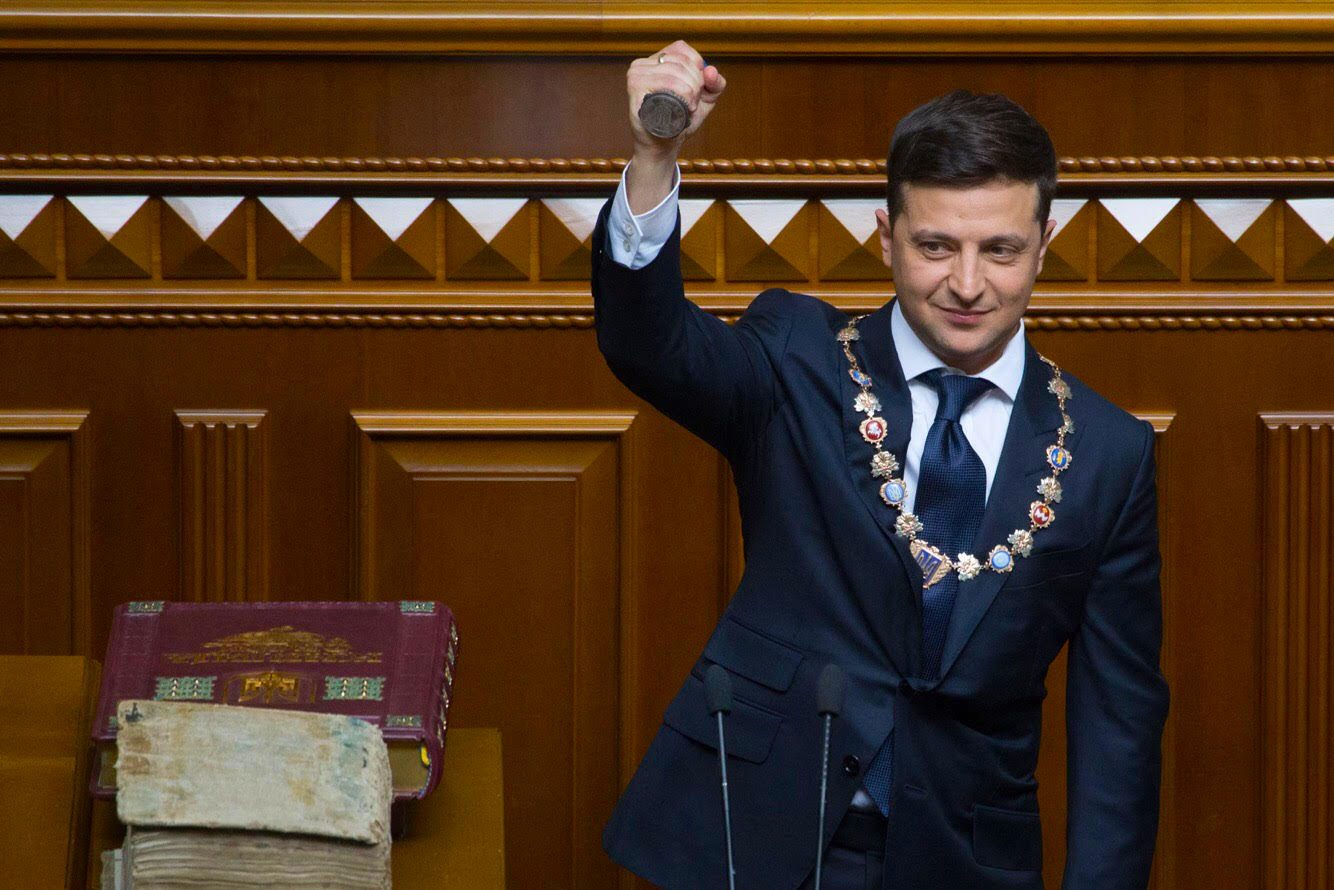 A War Only America And Britain Seem To Want

Above Photo: Zelensky at his 2019 inauguration. Mykhaylo Markiv / Presidential Administration of Ukraine.

Disagreement between the U.S. and Ukrainian presidents and cautiousness by Germany and France, seems to indicate only the U.S. and U.K. are keen for war with Russia.

The telephone call between U.S. President Joe Biden and Ukrainian President Volodymyr Zelenensky on Thursday was said to have not “gone well,” according to a senior Ukrainian official.

The official said Zelensky urged Biden to “calm down the messaging” on the situation in Ukraine and that Ukrainian intelligence did not see a Russian threat the same way the U.S. did, according to a report on CNN.  It is  “dangerous but ambiguous,” the official quoted Zelensky as telling Biden, and that “it is not certain that an attack will take place.”

At a news conference on Friday, Zelensky said: “They keep supporting this theme, this topic.And they make it as acute and burning as possible. In my opinion, this is a mistake.” He added: “If you look only at the satellites you will see the increase in troops and you can’t assess whether this is just a threat of attack or just a simple rotation.”

Zelensky also spoke about the resumption of diplomatic talks in Paris in the Normandy Format with Germany and France in which the Minsk Accords are to be implemented.  The 2015 accords would end the war between Kiev and two breakaway eastern provinces that opposed the 2014 U.S. backed coup that overthrew a democratically elected president that leaned towards Moscow. The provinces would be given autonomy from Kiev.  Zelensky said he hoped that the ceasefire in the east would hold.

This is almost the exact opposite of what the U.S. and its loyal media are blaring everyday. In the call, Biden raised the temperature, decisively saying that a Russian invasion of Ukraine was coming. “Biden warned his Ukrainian counterpart that a Russian attack may be imminent, saying that an invasion was now virtually certain, once the ground had frozen later in February, according to the official,” the CNN report said.

War fever has clearly gripped Washington. Emily Horne, a U.S. National Security Council spokeswoman, “disputed the senior Ukrainian official’s description of the call” according to the network.  “Anonymous sources are ‘leaking’ falsehoods,” she was quoted as saying. “President Biden said that there is a distinct possibility that the Russians could invade Ukraine in February. He has said this publicly and we have been warning about this for months. Reports of anything more or different than that are completely false.”  This was before Zelensky repeated the same sentiments on Friday.

But Zelensky is not the first first Ukrainian leader to deny that there is a serious threat from Moscow. The New York Times reported on Tuesday:

“Ukraine’s defense minister has asserted that there had been no change in the Russian forces compared with a buildup in the spring; the head of the national security council accused some Western countries and news media outlets of overstating the danger for geopolitical purposes; and a Foreign Ministry spokesman took a swipe at the United States and Britain for pulling the families of diplomats from their embassies in Kyiv, saying they had acted prematurely.”

The line from Washington, funneled through the U.S. corporate media, is that America understands Ukraine better than Ukrainian officials do. The reason Ukrainians are pushing back against the U.S. hysteria, “analysts” are “guessing,” is to “keep the Ukrainian markets stable, prevent panic and avoid provoking Moscow, while others attribute it to the country’s uneasy acceptance that conflict with Russia is part of Ukraine’s daily existence,” as the Times reported.

It couldn’t possibly be because there’s not the threat the Americans say there is.

The war fever is clouding the minds of the U.S. national security state and its loyal media. And, as always, arms manufacturers like Lockheed Martin and General Dynamics stand to benefit.

The angry response from the NSC spokeswoman reveals how official Washington is reacting to doubts about the war hysteria, even if it comes from the president of the supposedly targeted country.

Ukraine is not the only country that is not as gung-ho for war as America. Germany has refused to ship its weapons to Ukraine. “Weapons deliveries would not be helpful at the moment – that is the consensus within the government,” German Defense Minister Christine Lambrecht said last week.

Last Saturday, Vice-Admiral Kay-Achim Schönbach, the head of the German navy, resigned after saying talk of a Russian invasion of Ukraine was “nonsense” and that Russia was merely seeking “respect” for its security concerns in Europe.   German business with extensive commercial ties to Russia, has long bridled under pressure from Washington to put German sanctions on their trading partner.

Germany’s stance has freaked out strident Atlanticists, such as the think tank Carnegie Europe, which yesterday said, “If Berlin does not adopt a bolder, unambiguous stance toward Russia, it will undermine the West’s deterrence efforts.”

The U.S. State Department took the extraordinarily bold step on Thursday of dictating to Germany that the U.S. would shut down the Nord Stream 2 natural gas pipeline from Russia to Germany — a commercial project that has nothing to do with the U.S. — if Russia invades.

“I want to be very clear: if Russia invades Ukraine one way or another, Nord Stream 2 will not move forward,” U.S. state department spokesman Ned Price told NPR. But even the BBC had to say: “Questions remain over whether the US would have the power to cancel the project.”  By no coincidence, the U.S. this week said it was organizing much more expensive liquified natural gas shipments, from the U.S. and other parts of the world, if a war caused Russia to turn off its gas pipelines to Europe.

For its efforts to undermine Russia and even for naked commercial interests, the U.S. seems to be willing, even begging, Russia to invade.

In an address to the European Parliament last week, French President Emmanuel Macron appeared to show Russia the kind of respect Schönbach was talking about. He said:

“Europe needs to build a collective security order on our continent. Our continent’s security requires a strategic reinforcement of our Europe as a power of peace, a balancing power, particularly in its dialogue with Russia. I have been advocating this dialogue for several years. It is not optional, for our history and our geography are stubborn, both for ourselves and for Russia. For security in our continent, which is indivisible. We need this dialogue…. What we need to build is a European order founded on principles and rules to which we have committed, and which we established not against or without Russia, but with Russia.”

Despite Macron’s words, France has agreed to send a contingent of its NATO soldiers to Eastern Europe, along with Denmark, Spain, and the Netherlands.

As is often the case, Europe is torn between its own interests and those being dictated by Washington, resulting in an ambiguous policy. There are few examples of Europe risking America’s ire, even for its own benefit.

Refusing to cooperate with the U.S. on Ukraine would signal a European defiance of the United States such as Charles de Gaulle pulling France out of NATO in 1966 to preserve French independence.

The last time European governments broke with Washington on a major issue was the 2003 U.S.-led invasion of Iraq. Then France and Germany joined Russia on the U.N. Security Council in blocking the war’s authorization (although Britain supported it). But France and Germany then voted for a resolution several months later that essentially condoned the invasion.

The dissension by the German admiral and the French president to the U.S. position exposes the war propaganda being stirred up daily over Ukraine as a mostly Anglo-Saxon affair.

Britain has begun playing an increasing role with the United States in preparing its populations for war, reminiscent of the lead-up to the 2003 U.S-U.K. invasion of Iraq.

Last Saturday, the British Foreign Office, without providing any evidence at all, said Russia is planning to “install a pro-Russian leader in Kyiv as it considers whether to invade and occupy Ukraine.” This week Prime Minister Boris Johnson said an invasion would become “a painful, violent and bloody business” for Russia.

The Ukrainian people already installed a pro-Russian leader through the ballot box, Viktor Yanukovych. He was overthrown in an actual U.S.-backed coup in Ukraine in 2014, leading to the continuing crisis.

Evidence for the Kiev coup came in the form of a leaked telephone call between then U.S. Assistant Secretary of State for European and Eurasian Affairs Victoria Nuland and the then U.S. ambassador to Ukraine in which they discussed who the new Ukrainian leader would be, weeks before the coup happened.

Britain is going further, spreading alarm that the Ukraine standoff can lead to a world war. Liz Truss, the British foreign secretary, traveled as far as Australia to raise fears that China might join the war by attacking Taiwan if Russia “invaded” Ukraine.

An interview she gave to The Sydney Morning Herald, under the headline: “Aggressors working together: UK’s Truss warns China could follow Russia into war,” began:

“China could use a Russian invasion of Ukraine as an opportunity to launch aggression of its own in the Indo-Pacific, British Foreign Secretary Liz Truss has warned. ‘I don’t think we can rule that out,” Ms Truss said. … “Russia is working more closely with China than it ever has. Aggressors are working in concert and I think it’s incumbent on countries like ours to work together.’”

The United States and Britain are trying to save a nation that says it does not need saving at the moment.  And it is only Washington and London that have fully spun this story of war and are ready to bully anyone of consequence who challenges it.